AMES, Iowa -- Iowa State University’s programs in landscape architecture and architecture are again ranked in the top 20 in the nation, according to the latest survey of practitioners by DesignIntelligence.

In addition, Luis Rico-Gutierrez, dean of the College of Design, was named one of the 25 most admired educators in the nation for 2016-17 (see separate story).

DesignIntelligence is a quarterly publication for leaders in design professions. The magazine’s annual report, “America’s Best Architecture and Design Schools,” is the only national college ranking survey that focuses exclusively on design. Rankings cover accredited programs in architecture, interior design and landscape architecture. Published in DesignIntelligence Quarterly Vol. 21, Third Quarter, the 17th annual survey was conducted in mid-2016 on behalf of the Design Futures Council.

The DesignIntelligence survey ranks programs from the perspective of leading practitioners. The publication contacted leaders in more than 2,900 professional firms who have direct experience hiring and supervising recent graduates in each of the design fields represented. They were asked the following question: In your firm’s hiring experience in the past five years, which schools are best preparing students for success in the profession? They also were asked about several dimensions of academic performance, such as how programs rate in teaching various skills.

There are 54 accredited landscape architecture graduate programs in the U.S. and one in Puerto Rico.

In a separate DesignIntelligence survey of current students, 95 percent of Iowa State landscape architecture students who responded said they “believe they’ll be well prepared for their profession upon graduation.” Ninety-five percent of respondents also rated the program’s quality to be excellent (72 percent) or above average (23 percent).

For 2016-17, Iowa State’s undergraduate architecture program ranked 18th. It has ranked in the top 20 for 12 of the past 14 years. The list this year was led by Cornell followed by Cal Poly, San Luis Obispo, and Syracuse University. There are 45 accredited undergraduate architecture programs in the U.S., one in Puerto Rico and one in the United Arab Emirates (American University of Sharjah).

In the student survey, 98 percent of the Iowa State architecture students who responded “believe they’ll be well prepared for their profession upon graduation.” Ninety-eight percent of respondents also rated the program’s quality to be excellent (62 percent) or above average (36 percent).

There are 318 undergraduate majors and 26 tenured or tenure-track faculty in architecture at Iowa State. 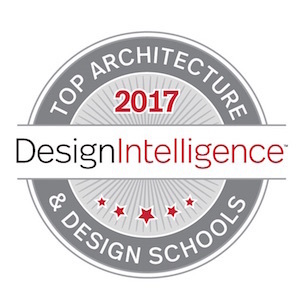