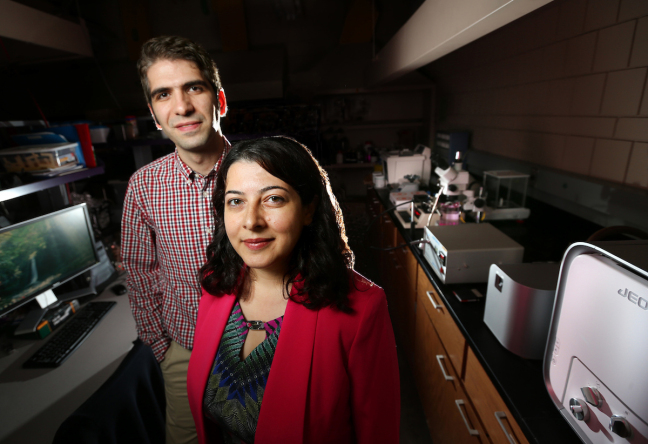 Farrokh Sharifi and  Nicole Hashemi, left to right, have used the technologies of microfluidics to design and fabricate fibers for single-cell studies and tissue engineering. Larger photo. Photos by Christopher Gannon.

AMES, Iowa –Iowa State University researchers have created a new way to design and fabricate microfibers that support cell growth and could be useful tools for reconnecting nerves and regenerating other damaged tissues. 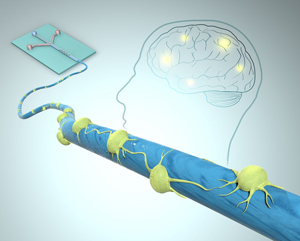 Neural stem cells have survived on the microfibers

fabricated by Nicole Hashemi and a team of Iowa

“Neural stem cells on our polymer fibers could survive, differentiate and grow,” said Nicole Hashemi, an Iowa State assistant professor of mechanical engineering and leader of an Iowa State team producing microfibers with the help of microfluidics, the study of fluids moving through channels just a millionth of a meter wide.

“These new fibrous platforms could also be used for cell alignment which is important in applications such as guiding nerve cell growth, engineered neurobiological systems and regenerating blood vessels, tendons and muscle tissue,” Hashemi said.

The research team’s findings were recently published in Biomacromolecules, a journal of the American Chemical Society. In addition to Hashemi, co-authors are Donald Sakaguchi, a professor of genetics, development and cell biology; Reza Montazami, an assistant professor of mechanical engineering; first author Farrokh Sharifi, a doctoral student in mechanical engineering; Bhavika Patel, a doctoral student in genetics, development and cell biology; and Adam Dziulko, a graduate who earned a 2015 bachelor’s degree in genetics.

Hashemi said the Office of Naval Research is supporting the project because it wants to learn more about traumatic brain injury.

“We are interested in understanding how shock waves created by blows to the head can create microbubbles that collapse near the nerve cells, or neurons in the brain, and damage them,” Hashemi said.

The Iowa State researchers are working to build a microfiber scaffold to support the cells and allow them to survive for the Navy’s studies of brain injuries. One day, the scaffold technology could help repair nerves or tissues damaged by injuries or disease.

“Our approach to fiber fabrication is unique,” Hashemi said. “There is no high voltage, high pressure or high temperatures. And so one day I think we can encapsulate cells within our fibers without damaging them.” 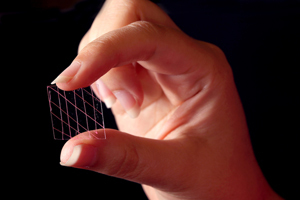 The microfibers designed and fabricated by Iowa

The Iowa State researchers have developed an approach that uses microfluidic fabrication methods to pump polycaprolactone (PCL) through tiny channels to produce microfibers. The fibers are 2.6 to 36.5 millionths of a meter in diameter. Their shapes can be controlled. So can their surface patterns. They’re also flexible, biocompatible and biodegradable.

“The novelty here is the fabrication method,” Hashemi said. “We employ hydrodynamic forces to influence the orientation of molecules for the fabrication of these fiber structures that have different properties along different directions.”

The Iowa State researchers demonstrated that neural stem cells were able to attach and align on the microfiber scaffold.

“In this study, cell death was minimal, and cell proliferation was affected by changing the features of the fibrous scaffold,” the researchers reported in their paper.

That finding has the researchers thinking their technology could be a tool that helps tissue engineers find ways to regenerate nerve cells and other tissues:

“By mimicking the microenvironment of the nervous system, regeneration can be enhanced due to biological and chemical cues in the environment,” the researchers wrote in their paper. “In addition, the PCL fibers can be applied in regeneration of other tissues such as muscle, tendons and blood vessels.”

Iowa State researchers are using the science of microfluidics -- the study of fluids moving through channels just a millionth of a meter wide -- to design and fabricate microfiber scaffolds that support cell growth and tissue engineering. The researchers' findings were recently published in the journal Biomacromolecules.

“Neural stem cells on our polymer fibers could survive, differentiate and grow.”