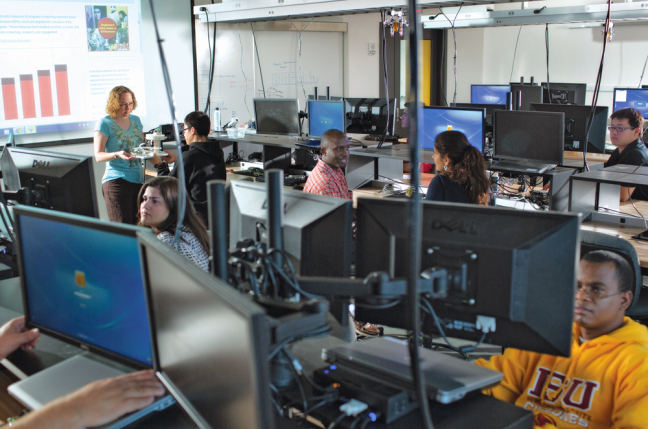 The achievement highlights the interdisciplinary culture at Iowa State that’s been widely promoted and supported by President Steven Leath, and is the culmination of a decade-long strategy to make the university and the state of Iowa global leaders in the bioeconomy and other key areas related to pressing challenges facing the nation and world.

Agricultural and biosystems engineering is co-administered by the College of Agriculture and Life Sciences and the College of Engineering, and exemplifies Iowa State’s long-standing strength in interdisciplinary learning and research. Since the department was founded in 1905 with a mission to mechanize agriculture, it has been a leader in providing engineering solutions to agricultural problems in the United States and the world.

“This is a tremendous achievement for Iowa State,” said President Leath. “This department represents a critical interface of two of our colleges with national reputations for excellence, using their combined expertise to pursue leading-edge work that will help feed and fuel a rapidly growing global population. Being recognized as the top program in the nation confirms Iowa State’s legacy of distinction in this field – and is a testimony to the passion and knowledge our experts bring to their work.”

Contributing to the strong rankings are facilities built in 2014 to house the department in the Biorenewables Complex, bringing together experts from across campus and offering state-of-the-art classrooms and laboratories.

“The facilities have allowed us to recruit the best and brightest faculty, staff and students, who are able to pursue groundbreaking discoveries and experience learning in modern facilities with modern tools and technology,” said Steve Mickelson, department chair and the Charles R. and Jane F. Olsen Professor in Engineering. “There is a direct correlation between investing in these facilities and becoming the nation’s very best department of agricultural and biosystems engineering.”

The facilities, including Elings Hall, Sukup Hall and the Sukup Atrium, were funded through combined support from the university, the state and generous donors. Elings Hall is named for Virgil Elings, a 1961 Iowa State mechanical engineering alumnus who co-founded Digital Instruments, the first company to make atomic scanning probe microscopy readily available to scientists and engineers.

Sukup Hall and Sukup Atrium are named in honor of Sukup Manufacturing and the Sukup family of Sheffield. Sukup Manufacturing is the world’s largest family owned manufacturer of grain bins and drying equipment, founded by Eugene and Mary Sukup in 1963. Eugene and Mary received honorary Iowa State degrees in 2010, and their two sons – and several grandchildren – are Iowa State alumni. Charles Sukup, now president of the company, holds two Iowa State degrees in agricultural engineering, and Steven Sukup, vice president and chief financial offer, has a degree in industrial engineering.

“The education our family has received, and the graduates our company has hired, proved to us the value of investing in Iowa State. Today’s success shows what can be accomplished when the university sets out to become the best in a field, and to have a positive impact on our state’s and nation’s economy. Most important, agricultural engineers feed the world and provide safe water, and it’s extremely fulfilling to take part in improving the quality of life for people around the world,” said Charles Sukup. “President Leath is really a driving force behind this vision as he inspires faculty and students to think big in finding solutions to the global problems we’ll face in the future – that Iowa State is uniquely qualified to address.”

Charles Sukup and his wife Mary also have generously provided faculty support that created the Mary and Charles Sukup Global Professor in Food Security in the department, currently held by Thomas Brumm. The Sukup Global Professor is one of five named or endowed faculty positions in agricultural and biosystems engineering made possible by private giving.

Rankings by U.S. News & World Report magazine say Iowa State University's program in agriculture and biosystems engineering is the country's No. 1 program for undergraduates and the No. 2 program for graduate students. The rankings highlight the interdisciplinary culture at Iowa State, new facilities on campus and the contributions of donors.

“This department represents a critical interface of two of our colleges with national reputations for excellence, using their combined expertise to pursue leading-edge work that will help feed and fuel a rapidly growing global population. Being recognized as the top program in the nation confirms Iowa State’s legacy of distinction in this field – and is a testimony to the passion and knowledge our experts bring to their work.”