ISU researchers use big data to save big dollars for DOT 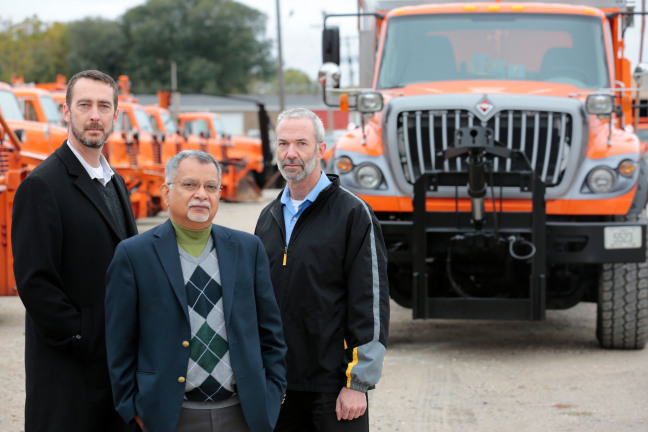 Kevin Scheibe (left) and Sree Nilakanta (center) both associate professors of information systems, collaborated with David May (right) Iowa Department of Transportation fleet manager, on a project to save money on maintenance and replacement of snow plows. (Larger image) Photo by Christopher Gannon

AMES, Iowa – It takes a fleet of around 900 snow plow trucks for the Iowa Department of Transportation to keep the roads and highways clear once the snow starts to fly. Maintaining that fleet is costly, which is why the DOT partnered with Iowa State University’s College of Business to identify potential cost savings.

Sree Nilakanta and Kevin Scheibe, both associate professors of information systems, analyzed 10 years of maintenance records for DOT snow plows – more than a million pieces of data – to identify the optimal time to replace old ones. For the two different snow plow trucks the DOT operates, ISU researchers found the best timeframe was six to seven years. That’s a dramatic difference than the DOT’s current 15-year replacement window, which means the DOT is paying more to repair and maintain old trucks than it would cost to replace them. Buying new trucks after six or seven years could save $2 million to $5 million annually.

To arrive at that number, Nilakanta and Scheibe created a simulation-based decision support system using maintenance records, purchase price and resale estimates in yearly increments. Basically, it’s an efficient way to process big data in real time to project when it’ll cost more to maintain than buy a new snow plow truck. Nilakanta and Scheibe say it’s a system that any government agency or company with a large transportation fleet can utilize.

“Many DOTs have the same problem and each one is trying a different approach. The system we’ve created is an easier way of doing the estimations and predictions,” Nilakanta said.

Word about the simulation system is spreading. Other state DOTs and private businesses have already contacted Nilakanta and Scheibe about conducting similar projects, as well as how they might use the system to analyze their own data.

In the age of big data, more and more business leaders are interested in using analytics to operate more efficiently and improve the bottom line. Scheibe says the tools and methodologies have long existed, but today the data is easier to access and process.

“We collect so much data, but we don’t know what to do with it,” Scheibe said. “To be able to apply different analytic methods allows us to go through massive amounts of data and create a series of options that enables decision makers to make better choices.”

David May, fleet manager for the Iowa DOT for nearly two decades, says the ISU research is the best case he’s had to significantly change how the DOT invests in its fleet. He has long suspected they were spending more to maintain trucks, but never had the data to support that conclusion.

“This research bore out what we suspected to be true. In fact, it’s the most solid evidence that we have to show that we really need to reduce the amount of time that we keep our snow plow trucks,” May said.

Nilakanta and Scheibe have presented the findings to several DOT leaders. May says the DOT plans to change the length of time that it keeps plows and adjust its snow plow budget accordingly.

Growing interest from industry and at ISU

The DOT partnership is just one example of the work Iowa State researchers are conducting on behalf of businesses in Iowa and across the country. Not only do businesses see value, but so do students. Nilakanta and Scheibe say since starting the project their analytics research team has grown from one to 20 graduate students, who are part ISU’s master of science in information systems, and specialize in analytics.

The team is looking at other applications and uses, such as inventory management, machine failure predictions and process improvement. Researchers say they designed the simulation system so that the DOT can modify as it collects new data. This is beneficial because as manufacturers develop new equipment technology, the optimal replacement window may change. It is important to continuously monitor maintenance records to recommend the best time to replace older equipment.

It's a question many transportation managers have likely asked: Is it better to replace or repair an older vehicle? With the help of Iowa State University researchers, the Iowa Department of Transportation now knows the answer for its snow plow trucks. And the answer could save the department millions.

“We collect so much data, but we don’t know what to do with it. To be able to apply different analytic methods allows us to go through massive amounts of data and create a series of options that enables decision makers to make better choices.”