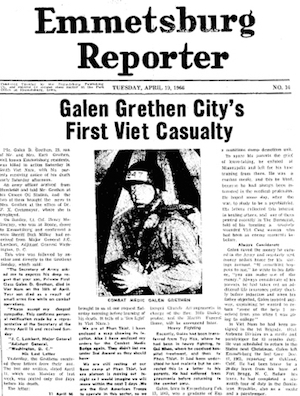 AMES, Iowa -- During a Veterans Day observance, Iowa State University will honor a former student from Emmetsburg who lost his life in Vietnam.

Galen Dean Grethen and three other former Iowa State students who died in military service will be recognized during the Gold Star Hall Ceremony, 3:15 p.m. Monday, Nov. 7, in the Memorial Union Great Hall on the university's campus. It is free and open to the public.

Although Grethen's name was previously engraved on the memorial wall, he has not been honored in a ceremony. His remembrance has been made possible with information provided by his classmate and friend, Del Marks of Ames.

Galen Grethen was born February 17, 1943, in Emmetsburg to Earl and Romola Grethen. His peers described him as likable, pleasant and quiet with a friendly smile. Growing up an only child, Galen spent much of his time helping his dad at the family’s Conoco station on Main Street.

After graduating from Emmetsburg High School with his class of 42 students, Grethen enrolled at Iowa State in the fall of 1961. He was the first person in his family to go to college. During his second year, he joined ROTC, and found it meaningful. He joined Pershing Rifles — a military fraternal organization dedicated to military drill — and devoted himself to the group’s tradition of being professional, disciplined and dedicated. Ever the sharp dresser, Grethen took pride in the crisp creases and polished boots of the Pershing Rifles when they served as regulation and exhibition drill teams, color guards and honor guards.

After two years at ISU, Grethen went to Mankato State in Minnesota for another semester. But he enjoyed ROTC more than his college classes, so enlisted in the Army in Minneapolis.

Despite protests from his parents, Grethen chose to be a combat medic and paratrooper, among the most dangerous ways to serve. He always had an interest in the medical profession, and hoped to become a psychiatrist after the war. Grethen's true passion for healing others was often expressed in the letters he wrote to his parents during his military service.

While in Vietnam, Grethen saved his Army earnings and regularly sent money orders home to his savings account. He wrote to his dad, “If something happens to me, you can make use of the money.” He also took out an extra life insurance policy shortly before induction, despite his father's objection. He explained that he wanted to repay his parents for their help while he was in college.

After completing a six-month tour of duty in the Dominican Republic, Grethen returned home for a 20-day leave from his base at Fort Bragg, North Carolina. While there, his unit received a Presidential Citation. His battalion had the longest period of duty and faced the most hostile forces “with the least casualties.” Grethen received the combat Medic Award Badge and the United States Expeditionary Forces Medal. He left Emmetsburg for the last time on December 17, 1965. He was scheduled to return the following Christmas, but he wouldn’t make it through spring.

In Vietnam, Pfc. Grethen was assigned to unit HHC, 2nd Battalion, 502 ND Infantry, 101st Airborne Division, United States Army Republic of Vietnam. He experienced firsthand some of the horror of the war. After one firefight in March of 1966, he wrote a letter to his parents, describing the brutal battle and the medical services he performed.

His last letter home was written on April 11, 1966, five days before his death:

Just received your letter, the one you wrote the 5th saying you got my film. It may be a long time before I send another incident to you. We are at Phan Thiet. I have enclosed a map showing its location. Also, I have enclosed my orders for the Combat Medic Badge again. They didn’t list me under 2nd Award as they should have.

We are still at our Base camp at Phan Thiet, but one platoon is moving out tonight, so I would imagine we would move within the next two days. We are the first American Troops to operate in this sector, so we don’t know what we are facing.

While serving as an army medical corpsman in Phan Thiet, South Vietnam, Grethen died on April 16, 1966. His platoon was moving out on a trail in combat formation, when the point man was wounded by unexpected fire from the enemy. When Grethen saw that the man was injured, he immediately ran to attend his wounds. As he ran forward, he was taken under fire by another undetected enemy emplacement. Even so, he continued to treat his fellow soldier. As Grethen carried the soldier to safety, he was mortally shot by an enemy automatic rifle. He was 23 years old.

After his death, Grethen was awarded the Purple Heart for “wounds received in action resulting in his death.” Additionally, he was awarded the Bronze Star Medal for heroism and great courage in the face of danger, especially in battle. Grethen’s memory continues on as a courageous, brave and devoted man who died trying to save his fellow soldiers. He is buried at Evergreen Cemetery in Emmetsburg. 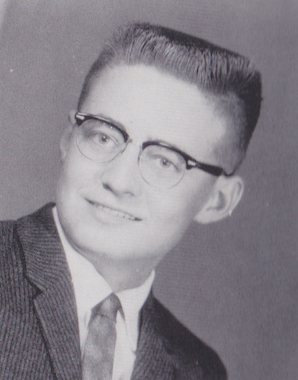