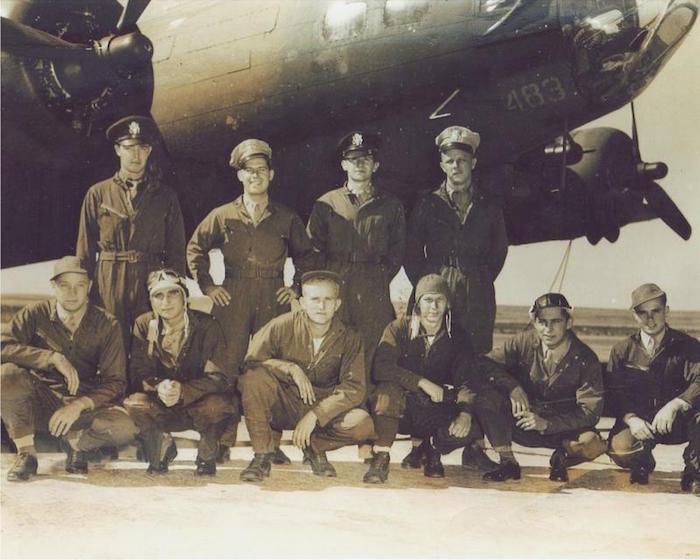 The crew of Morris Marks' San Antonio Rose B-17 bomber.

AMES, Iowa -- During a Veterans Day observance, Iowa State University will honor a former student from Lake Park who lost his life in World War II.

Morris Rusch Marks and three other former Iowa State students who died in military service will be recognized during the Gold Star Hall Ceremony, 3:15 p.m. Monday, Nov. 7, in the Memorial Union Great Hall on the university's campus. It is free and open to the public.

Although Marks' name was previously engraved on the memorial wall, he has not been honored in a ceremony. His remembrance has been made possible with information provided by his nephew, Del Marks of Ames.

Marks and his twin brother, Warren, were born on June 14, 1915 to Wilford and Julia Marks. They grew up with five younger siblings on a farm north of Lake Park. Although Marks often helped his father on the farm, he dreamed of becoming a pilot from a young age.

The Marks twins graduated from high school in 1933. Marks enrolled in veterinary medicine at Iowa State in 1934. After three semesters, he left college, but returned later to study business. He also joined ROTC, which he enjoyed. Marks left Iowa State in 1939 and helped his father on the farm until he enlisted in the Army Air Corps in April 1942.

Beginning in the summer of 1942, Marks' pilot training took him to facilities in Santa Ana, California; Tucson, Arizona; Marfa, Texas; Moses Lake, Washington; Rapid City, South Dakota; and Kearney, Nebraska. In September 1943, he joined nine men at the Rapid City Army Air Base. During the next three months, they were transformed into a solid bomber crew.

After arriving in England, they continued training as a crew for two months, preparing for missions above enemy territory. On Jan. 30, 1944, they flew their first mission. But engine problems forced them to abort before reaching the Dutch coast. In the first half of February, however, they safely flew five successful missions for targets in France and Germany.

On February 21, 1944, the “Marks crew” departed on their sixth bombing mission to Brunswick, Germany, in their B-17, called the San Antonio Rose. As they approached their target, flak from German fighters damaged one engine. The plane began vibrating vigorously so they dropped their bombs and started reducing power. They soon lost altitude, and the plane was hit again at 24,000 feet, and then dropped to 14,000 feet where the vibration stopped. The crew intended to fly in cloud cover back to England. However, a clear blue sky eventually left them exposed. German fighter planes shot at them, setting the plane on fire.

In an excerpt of a letter to Marks' mother, one of the survivors, Charles Barnthson, wrote the following description of these last moments:

“We got into the clouds at 12,000 feet and started back. We flew for about three quarters of an hour and we were over Holland when we ran out of clouds. Right then we were attacked by 12 or 15 enemy fighter planes, at least. It was so quick that we hardly had a chance to bail out. I was standing between Lt. Marks and Lt. Derenburg, the co-pilot. One of the planes hit our controls and they froze with the plane in a climb. We knew the plane would soon stall out, and the only thing for us to do was to abandon ship. By this time, we only had two good engines anyway.

"Lt. Marks gave the order to bail out and I turned to put on my parachute. I was ready to leave the ship when I looked back. He was getting out of his seat and motioned for me to go ahead. Naturally, I believed him to be coming right behind me. I opened my chute immediately and then maneuvered it so I could see the ship. I waited and watched, but only one man ever came out. He was Sgt. Glover, the right waist gunner.

"Mrs. Marks, I want to tell you straight. I know you heard other stories, but I watched that ship until it hit the ground and only one chute, besides myself, ever came out. There is no doubt in my mind that I was the first man out, and I know that Sgt. Glover and myself were the only ones to get out. What happened to the other fellows, I can’t tell you. I know we were riddled by bullets and I believe most of the boys were killed before we realized our fate."

The two soldiers mentioned — Staff Sgt. Charles Barnthson and Sgt. Barclay Glover — were captured and spent 14 months in German prison before being freed. The bombardier, Flight Officer George Amberg, was thrown from the plane and died that day. The other seven crewmembers, including pilot Marks, were engulfed in the flames as the San Antonio Rose crashed. They were officially listed as “missing” February 1944. Marks was officially declared killed in action on October 5, 1945. He was 28 years old.

In 1946, the American Recovery Operation found unexploded bombs that belonged to the San Antonio Rose. Extending their search in the marshy Polderlandt, they found pieces of the stricken bomber that had sunk nearly 25 feet. On August 24, after nearly two weeks of dredging, the remains of three crewmen were recovered, and one was assumed to be Marks. The crewmen are buried together at Fort McPherson National Cemetery in Maxwell, Nebraska.

Marks was posthumously awarded the Air Medal, which was presented to his mother. 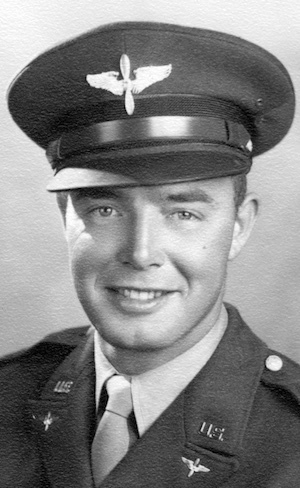