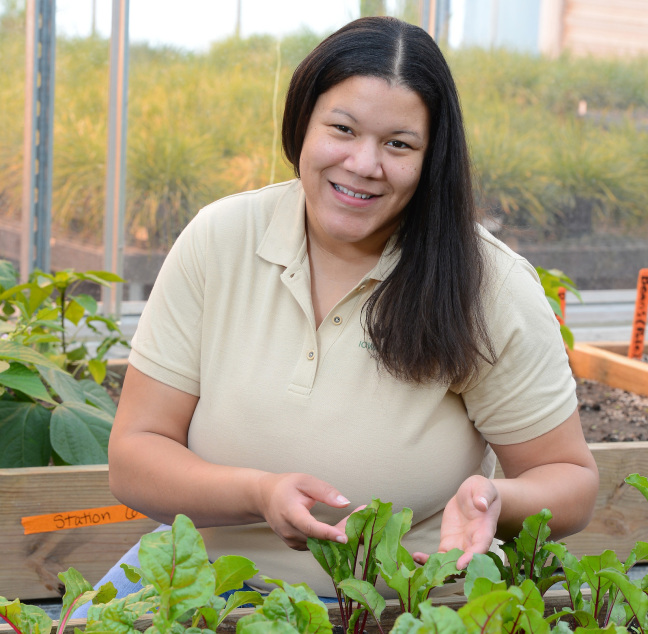 Angela Shaw draws on her experience as a microbiologist to help fruit and vegetable growers throughout the Midwest comply with the latest food safety regulations. Photo courtesy of the ISU College of Agriculture and Life Sciences. Larger image.

AMES, Iowa – If you really want to understand food safety, microbiology might be a good place to start.

What pathogens cause foodborne illness? How do those pathogens spread? How can people stop them?

Angela Shaw, an assistant professor of food science and human nutrition at Iowa State University, has put those questions under the microscope. And she’s leading an ISU-based center with the mission of helping fruit and vegetable growers across the Midwest improve their operations to make sure their products are as safe as possible.

She takes a science-based approach to food safety, grounded in her training as a microbiologist. Her research throughout her career has required her to predict how bacteria will respond to various stimuli, a challenge she finds thrilling.

“We’re working in a holistic way to make our food supply safer, and we’re working with the people who need the most help to accomplish that,” Shaw said.

Shaw leads the North Central Regional Center for Food Safety Training, a federally funded initiative launched earlier this year at Iowa State to provide guidance to fruit and vegetable growers on how to comply with new food safety regulations. The center oversees 12 Midwestern states and is currently conducting a needs assessment to determine where growers could use the most help.

The effort stems from the passage of the FDA Food Safety Modernization Act (FSMA), a 2011 law that aims to strengthen the U.S. food safety system by preventing foodborne outbreaks before they occur.

Shaw said the aging federal food safety rules needed an overhaul, but changes to the law mean many fruit and vegetable growers will have to make major changes to comply with the new regulations. The smallest growers, many of which will have the most difficult time adjusting to the new law, have a few years before they must comply, while larger companies will have to comply sooner.

Shaw said many growers have named employee training as their top concern under the new law. The center will produce materials that will help train workers in compliance with the law.

The center recently received an additional $1.12 million grant from the Iowa Department of Agriculture and Land Stewardship to develop a state-specific checklist to help Iowa growers comply with the law.

Shaw earned a bachelor’s degree in animal science from Iowa State and continued her education at ISU with a master’s degree in meat science. Shaw said she loves to cook and wanted to pursue a career in the food industry, but she also knew she didn’t want to be a chef.

A product development course at Iowa State sparked an interest in how food products are designed and packaged. Johnsonville sponsored her master’s project, which focused on how packaging food products can affect shelf life.

After finishing at Iowa State, Shaw pursued her Ph. D. in microbiology at Texas Tech. She said she wanted to expand her food expertise beyond meat and poultry, so she switched her focus to fruit and vegetable production.

“From then on, produce became my world,” she said.

Shaw spent two years during her Ph. D. coursework in California working with large-scale vegetable producers. Her thesis tested the potential use of lactic acid bacteria, which are used in making yogurt and are known to combat foodborne pathogens, in fruit and vegetable production.

Projects like that reinforced that she’d found her calling. Shaw said it’s often difficult to predict how bacteria will respond in an experimental situation, and that’s a challenge she embraces.

That means learning as much from failed experiments as it does from successful ones, and expecting the unexpected that inevitably arises in microbiology.

“I laugh at my hypothesis because bacteria rarely behave how you expect them to behave,” she said. “That inspires me. I think that’s fascinating.”