AMES, Iowa – An Iowa State University research team has identified the specific mutations that have led to the virulence of a major bacterial threat to ruminant animals such as cattle and sheep.

The discovery could pave the way for new treatment options and possibly even a vaccine to help sheep and cattle producers fend off the bacteria, said Qijing Zhang, an associate dean for research and graduate studies in the ISU College of Veterinary Medicine and a professor of veterinary microbiology and preventive medicine.

The bacteria, known as Campylobacter jejuni, can cause miscarriage in pregnant sheep and cows. It can also lead to food poisoning in humans who consume raw, or unpasteurized, milk from infected animals.

Zhang said nearly all of the U.S. cases of sheep abortion during the last 13 years caused by the bacteria arose from a particular strain of the bug, which was capable of moving from an animal’s gut into its bloodstream and eventually into the placenta of a pregnant animal. Other strains of the bacteria didn’t manifest the disease, so Zhang’s team decided to find out what made the virulent strain different from the others.

To do so, the team purified the genome of the virulent strain and inoculated its DNA into a culture of a non-virulent strain, so it would then take up the DNA and become capable of causing the disease. Using cutting-edge sequencing technology, the research team was able to zero in on the unique gene mutations that gave rise to the virulent property.

“It’s like giving an army a specialized weapon that it didn’t have before and seeing if the army becomes more destructive,” Zhang said. “In this case, the weapon is the mutation that makes the bacteria more virulent.”

Making the research even more vital is the fact that the virulent strain is resistant to tetracycline, the only drug approved to treat sheep abortion. Zhang said identifying the features that make the strain so dangerous will pave the way toward new avenues for controlling the disease, including the potential for the development of a protective vaccine.

“Every spring before lambing season, we see a wave of sheep abortion due to this bacteria,” Zhang said. “Our hope is to find a way to stop that from happening, and, by doing so, it will help to improve food safety.” 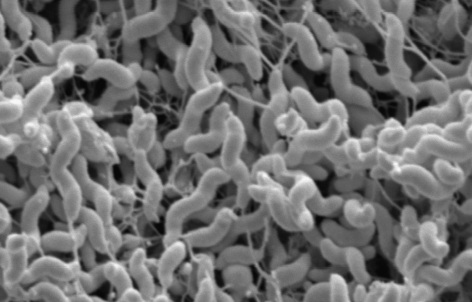 This image of Campylobacter jejuni was captured using a microscope. ISU scientists hope their new research could lead to new ways to control the bacteria in ruminant animals. Image courtesy of Qijing Zhang. Larger image.

An Iowa State University veterinary research team has discovered the specific genetic mutations that make Campylobacter jejuni such a virulent strain of bacteria in ruminant animals such as sheep and cattle. The research could lead to a vaccine or new ways to control the bacteria.

“It’s like giving an army a specialized weapon that it didn’t have before and seeing if the army becomes more destructive. In this case, the weapon is the mutation that makes the bacteria more virulent.”

Qijing Zhang, associate dean for research and graduate studies in the ISU College of Veterinary Medicine and a professor of veterinary microbiology and preventive medicine