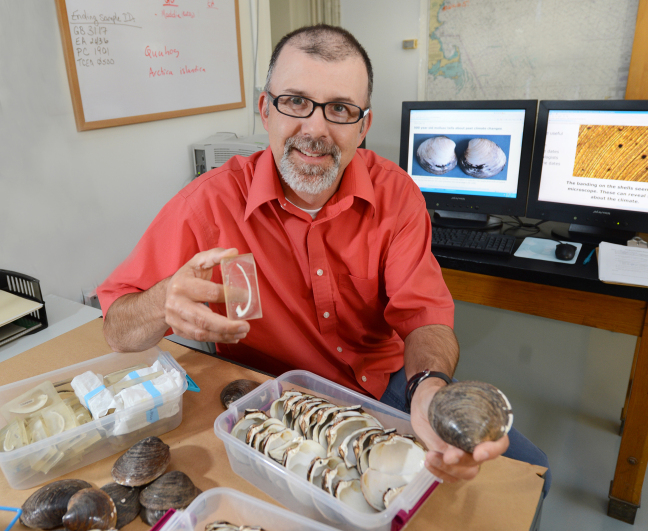 AMES, Iowa – Alan Wanamaker, working as a postdoctoral researcher from 2007 to 2009, was charged with beginning to compile a 1,000-year record of the marine climate for a spot in the North Atlantic just off the fjords and fishing villages of North Iceland.

He was at Bangor University in Wales, working with James Scourse and Chris Richardson, professors in the School of Ocean Sciences. Before Wanamaker were thousands of clams, each specimen of Arctica islandica taken from 80 meters of seawater on the North Icelandic Shelf.

Those clams – dead and alive, some able to live up to 500 years in the icy water – were the research group’s sensors under the sea. Just like tree rings say a lot about growing seasons over time, annual growth increments in the shells can tell researchers a lot about ocean conditions over time. 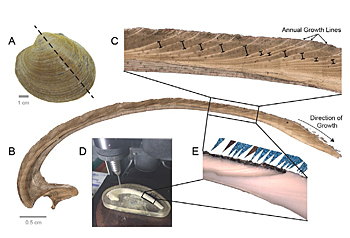 How scientists study clam shells: A) The dashed line shows the

shell's maximum growth axis. B) The cross-section of a shell

cut along its maximum growth axis. C) Detail of a section of the

shell showing annual growth lines. D) The shell has been

growth lines are marked by the blue triangles. Larger image.

Image from the Variations newsletter of the U.S. Climate

Then he’d eye cross sections of shells, looking for patterns, matching growth rings, finding overlaps, all with the goal of eventually lining up enough shells to build a master chronology of growth increments covering a millennium. After Wanamaker left Wales, Paul Butler, now a research lecturer at Bangor University, continued with the shell chronology and David Reynolds, now a postdoctoral research associate at Cardiff University in Wales, completed the isotope analysis. Wanamaker called it a real team effort.

That open-access record, based on 10 years of work and analysis of nearly 1,500 isotope samples from dozens of clams, is now complete, Wanamaker and other researchers report in a paper just published online by the journal Nature Communications. Reynolds is the paper’s lead author. Wanamaker, Scourse, Richardson, Butler and six others are co-authors.

“Here we report a new 1,048-year precisely dated, annually resolved marine oxygen isotope record that spans the entirety of the last 1,000 years (AD 953-2000),” the researchers wrote in their paper.

A step toward climate prediction?

Wanamaker said the paper is important for two reasons:

First, it’s the first time researchers have produced a dated and annual record of ocean conditions that goes back 1,000 years. (“That’s incredibly difficult,” Wanamaker said. “You need a lot of material to make this kind of chronology. And as you go back in time, there’s less and less to work with.”)

Second, analysis of the annual record has allowed the researchers to study how temperature, density and circulation changes in the North Atlantic have affected changes in the broader climate system.

The record “strongly indicates that ocean variability played an active role in driving the major pre-industrial climate variability of the past 1,000 years,” the researchers wrote in their paper. That variability would include the warming of the Medieval Climate Anomaly from about A.D. 950 to 1250 and the cooling of Europe’s Little Ice Age from about A.D. 1550 to 1850.

The biggest discovery in the record so far?

“The coolest thing that came out of this record is that during the first 800 years of data, ocean changes seemed to be leading atmospheric changes, or the changes were at least simultaneous,” Wanamaker said. “But after 1800 and the industrial revolution, the atmosphere seemed to take complete control.”

The acceleration in atmospheric change compared to ocean change is “probably driven by the faster response of the atmosphere to the warming influence of greenhouse gases,” the paper reports.

Added Wanamaker: “We haven’t seen anything like that in the last 1,000 years.”

Now that the 1,000-year marine record is complete and initial analyses have been made, Wanamaker said there’s still work to do.

His own Iowa State research group is collecting and analyzing clam shells from waters off Maine and Norway with the goal of building marine climate records for other places in the ocean.

He also said there’s more to learn about the association between oceans and climate.

The shell record of ocean conditions “provides a long-term baseline for the state of the North Atlantic coupled climate system,” the researchers wrote in their paper, “and demonstrates that the role played by the ocean in naturally forced climate variability should be a key focus if we are to realize the societally crucial step forward in near-term climate prediction.”

And so, all those years of sorting and studying clam shells were worth the time and tedium, Wanamaker said. “It’s really gratifying to see this come to fruition.”

Just like trees have growth rings that scientists can study for clues about past growing conditions, clam shells have growth increments that offer clues about past ocean conditions. Scientists -- including Iowa State's Alan Wanamaker -- have sorted and studied thousands of clam shells to build a 1,000-year record of ocean conditions at a spot just off North Iceland. That record tells scientists that ocean variability played an active role in driving the major climate changes before the industrial revolution. But that changed with industrialization. The scientists' findings were just published online by the journal Nature Communications.

“The coolest thing that came out of this record is that during the first 800 years of data, ocean changes seemed to be leading atmospheric changes, or the changes were at least simultaneous. But after 1800 and the industrial revolution, the atmosphere seemed to take complete control.”