“The Hidden Children,” 2005 (oil, acrylic and collage on canvas). Paper was in short supply at the OSE homes for children, so Karp used the letters from her parents (sent before they died in the concentration camps) for drawing paper. Pappenheimer incorporated some of those drawings and letters into this painting. Painting by Deborah Pappenheimer.

AMES, Iowa — The horrific and hopeful experiences of a young Jewish girl in Europe during World War II, first translated into a book by her daughter — an Iowa State University College of Design senior lecturer — have been adapted for the stage.

Deborah Pappenheimer's book, “My Broken Doll: A memoir of survival of the Vichy Regime,” is the story of Beatrice “Bea” (Stern) Karp, who was relocated nearly 20 times before the age of 15 as a hidden Jewish child during World War II.

The play, “My Broken Doll,” which premiered at the Jewish Community Center Theater in Omaha in August, is slated to travel to a dozen schools across Nebraska during the 2016-17 academic year. It will also be featured at the Nebraska High School Thespian Convention in Lincoln in January.

“I always felt that what my mother had to say was important,” Pappenheimer said. “When my father died in 1987, I realized what happened to her was important in shaping my life. I felt that her story needed to be documented. It was time to get it down on paper.”

Pappenheimer interviewed her mother numerous times over a period of two and a half years. The book features vintage family photos and original artwork by Pappenheimer, who has taught drawing and painting at ISU since 1993.

Published through Blurb in 2014, the book chronicles 13 years of Karp’s childhood in war-torn Europe — from her early life in Germany, to the war’s end and her departure from Paris to a new life in the United States. Pappenheimer chose key episodes from her mother’s experiences — including the significance of a broken doll —to illustrate with her own mixed-media, acrylic and oil paintings. 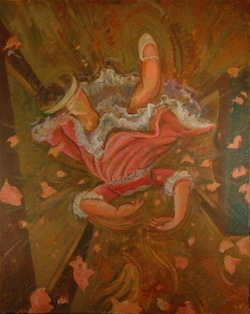 “They had to resonate emotionally with me. They were all really significant events in her life. The broken doll — that was sort of symbolic of her broken childhood, given how her life changed forever then. People can take away material things, and put you in places you never want to be, but what’s in your brain can never be taken away,” she said.

From her home in Lauterbach, Germany, Karp — along with her mother, father and younger sister — was deported to the Gurs and then the Rivesaltes concentration camp in the south of France. The family was subjected to innumerable hardships at the hands of the Nazi regime throughout the war. After Karp and her sister, Susie, were rescued by the French Children’s Aid Society (OSE), Karp's parents, Moritz and Rosa Stern, were murdered. The sisters were shuttled between two convents and 14 OSE-operated “hidden chateaus” in France before immigrating to London and then the United States, where they lived with two aunts and an uncle in Queens, New York. In 1951, Karp married. She and her husband moved to the Midwest where they raised four daughters and eventually settled in Omaha.

While Karp initially did not intend to talk publicly about her childhood trauma, a Dale Carnegie course in 1963 convinced her to speak formally about her experiences during the war. For more than 50 years, she spoke to community groups and school children across Nebraska and Iowa about her young life on the run and — perhaps most memorably — of her broken doll, smashed to the floor while she was forcibly removed from her home. The doll became a symbol of her shattered childhood. Karp also recounted the discrimination and bullying she suffered growing up because she was Jewish.

Her story resonated with daughter Pappenheimer, who decided to share her mother’s experiences “in a way that future generations could read about it.”

A lesson for today

Once the book became a reality, Pappenheimer wanted to keep her mother’s story alive by continuing to share it with school children.

With director Fran Sillau and playwright Ernie Nolan, “My Broken Doll” was developed into a live drama, co-commissioned and co-produced by the Institute for Holocaust Education and the Circle Theatre with funding from the Nebraska Arts Council, Nebraska Cultural Endowment and Humanities Nebraska. Pappenheimer was involved with the play’s development from the start.

“It was a very collaborative process," she said. "My mother was very agreeable toward it. It took about a year for the play to be written, and it really changed over time.”

The three-actor, 50-minute play is intended to be performed on a stage in a class-assembly setting.

“The stage adaptation will reach middle and high school students more easily than the book in terms of emotional, historical and moral impact,” Pappenheimer said. “It addresses bullying and stereotyping. There are a lot of lessons to be learned. There’s a problematic environment that we live in today —racism still exists.

“It was difficult for my mother to watch the premiere,” Pappenheimer said. “But she was really glad that it was completed. And I think the play will have a life of its own. I’d like it to tour Iowa as well, with a new set of actors. And eventually I’d like to see a film made out of my mother’s experience. It would be great — more full — with a lot of important scenes left out of the play that could be included.”

Karp continues to speak to school and community groups “in honor of the memory of my parents and the six million Jews who died in the Holocaust,” she says in the afterword of the book about her experiences. “Many students write to me after my talks and tell me they learned that prejudice and bullying are horrible and can lead to terrible things. I want others to know of the struggle and the horror so that it never happens again, but I also want them to know of our ability to persevere, and that good can come, even after what seems like the worst.”

Deborah Pappenheimer's book, “My Broken Doll: A memoir of survival of the Vichy Regime,” is the story of her mother, who was relocated nearly 20 times before the age of 15 as a hidden Jewish child during World War II. The book has adapted for the stage and will be performed in a dozen schools across Nebraska, and at the Nebraska High School Thespian Convention in Lincoln in January. 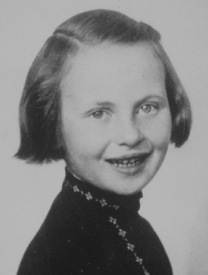 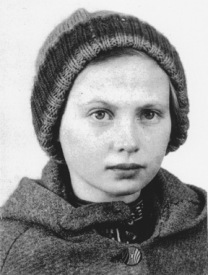 Karp, age 9. Her mother made the coat from a blanket in the concentration camp.

"... I realized what happened to her was important in shaping my life. I felt that her story needed to be documented." 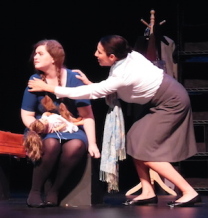 A scene from performance of the play.