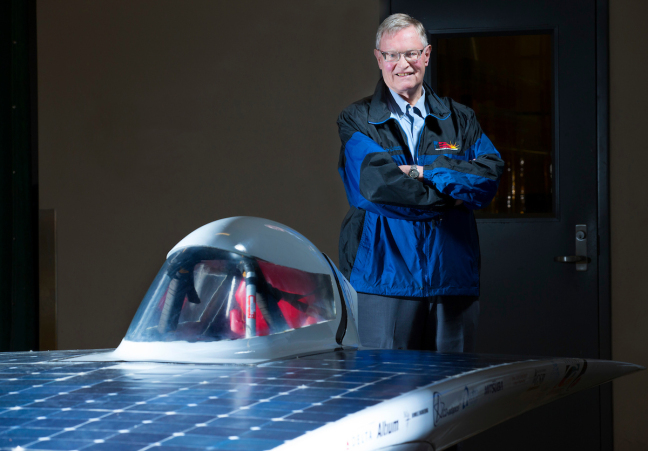 AMES, Iowa – Wade Johanns had the honor of announcing the second-ever Lifetime Achievement Award from the organizers of the American Solar Challenge, a cross-country race for student-designed and student-built solar cars.

As he stood before the banquet that concluded this summer’s solar race from Ohio to South Dakota, Johanns made sure to avoid eye contact with the winner. He didn’t want any hints. He wanted a real surprise.

James Hill – adviser to Team PrISUm since 1989 and a University Professor of Chemical and Biological Engineering. Hill was honored, “For outstanding contributions to solar car competition and devotion to the success of Team PrISUm from Iowa State University.”

“He was totally unfazed,” Johanns said. “He came up and I gave him the award. He was so calm and collected while I’m going crazy in my head trying to keep it together.”

How, exactly, has Hill been devoted to the success of Team PrISUm all these years?

Well, said Johanns, it’s not like Hill, who’s 76 and will retire in May, is still pulling all-nighters with the team.

“Dr. Hill would stop by a few times a month and visit us in the garage,” he said. “He’d come in and see how we’re doing and check up on us. In one word, what he gave us was perspective. He had a lot of experience from many years of doing this.”

He’d share ideas and mistakes to avoid. He counseled against rash decisions. He advocated “for robust design practices – he didn’t want to see the car fail,” Johanns said.

And he’d tell stories. Like the time back in the early ’90s when an engineering student handled fundraising and a finance student built the solar array.

“He had good stories and cautionary tales,” Johanns said. “He would tell some of those stories every year – he had lots of practice remembering them.”

After sitting down with Hill to talk about his decades as an adviser to Team PrISUm, the conversation drifted to Hill’s high school days playing piano and trombone in Spokane, Washington. As a young man he decided he “could probably do better as an engineer” than as a musician. And so he studied chemical engineering (and started 20-some years of playing competitive volleyball) at Stanford and earned his doctorate at the University of Washington. Then came postdoctoral work at NASA’s Goddard Space Flight Center in Maryland and Shell Development in California.

Then he explained his research of turbulence theory and the fluid mechanics of turbulence, projects that involve computer modeling and experiments. (He threw in mentions of “multi-inlet vortex mixing,” “large eddy simulation,” “turbulent velocity statistics” and other lab talk.)

He also talked about joining the Iowa State faculty in 1971 and his days as chair of the department of chemical and biological engineering (2005-2009). He brought up his leadership posts with the American Institute of Chemical Engineers and the Council for Chemical Research. And he highlighted his service to Tau Beta Pi, the engineering honor society, as a district director and a campus adviser.

The honor society is how Iowa State – and Hill – got a start in solar car racing.

Iowa State’s chapter was selected for the first cross-country race for solar cars back in 1990, the GM Sunrayce USA, a race from Orlando, Florida, to Warren, Michigan.

“We didn’t know anything about solar energy,” Hill said.

The team figured on a total budget of $20,000 to $30,000 (while a few of the other teams had $120,000 to spend on space-grade solar cells). The team also split off from Tau Beta Pi so all Iowa State students – engineers and non-engineers alike – could join.

But that first project – PrISUm, with its bulbous front and long, flat tail – was the start of Iowa State’s long tradition of solar racing. This past summer, Team PrISUm’s 13th project completed 1,975 miles of racing. Problems slowed the team’s car throughout the race, but students still had enough speed and resilience to finish seventh of the 13 cars that started.

“The amazing thing about these races is we always start with a set of rules, a blank sheet of paper and no money,” Hill said. “We have to design and build a car and it has to work and be on time. There are no excuses. This is a real-world contest.”

Over the years, Hill said he’s seen solar car teams from other schools come and go as the programs lost interest and continuity.

“This is kind of a brain sport and it’s good for Iowa State’s image,” Hill said. “It’s a different way of generating interest in science and engineering as well as providing something of interest to alumni and the public. It’s important for Iowa State because it represents so many things – high technology, ecology, energy efficiency. And it shows students what’s possible.”

Matt Goode, the current project director for Team PrISUm, said it’s valuable to have Hill sharing his knowledge when he stops by the garage or joins the team for part of a race.

“He’ll walk in and just ask, “How’s it going?’” Goode said. “‘What’s the aerodynamic drag?’ ‘Do you have covers for the wheels?’ Then he’ll ask, ‘Why aren’t those questions answered?’ And he’ll leave us with work to do.”

Hill’s goal for that work is continuous improvement of the students’ skills and their solar car, Goode said.

And, “He’s always trying to teach us to be prepared.”

Hill’s reward for all those years of questions and lessons?

As he walked up to receive his Lifetime Achievement Award, Goode said the whole crowd – organizers, judges, advisers, students from competing teams – honored Hill with a standing ovation.

Organizers of the American Solar Challenge have honored James Hill, University Professor of Chemical and Biological Engineering and longtime adviser to Team PrISUm, with a Lifetime Achievement Award for his contributions to solar car racing.

“This is kind of a brain sport and it’s good for Iowa State’s image. It’s a different way of generating interest in science and engineering as well as providing something of interest to alumni and the public. It’s important for Iowa State because it represents so many things – high technology, ecology, energy efficiency. And it shows students what’s possible.”

“He’ll walk in and just ask, “How’s it going? What’s the aerodynamic drag? Do you have covers for the wheels?’ Then he’ll ask, ‘Why aren’t those questions answered?’ And he’ll leave us with work to do.”