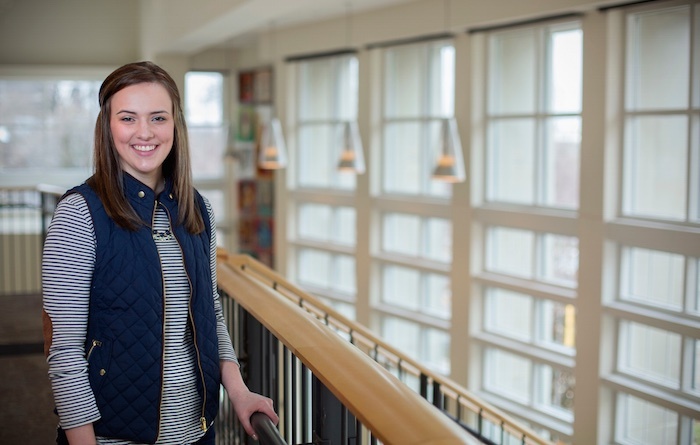 AMES, Iowa -- On her way to becoming a teacher, Amanda Paulsen Rohlf hit a brick wall. Actually it was the Coralville Reservoir. But the way her head struck the water when she flew off her boat-pulled inner tube, it might as well have been a brick wall.

That was July 16, 2011. Rohlf had just completed her junior year at Cedar Rapids Kennedy High School. Advanced placement ... tennis team ... show choir ... Hy-Vee checker. She had the world at her fingertips.

Rohlf doesn’t remember the impact of her head hitting the water. Testing by specialists at the University of Iowa Hospitals and Clinics revealed the severity, however. Her mental processing speed or cognitive function ­—thinking, ideation, reasoning, emotion, etc. — was significantly impaired. Her writing ability was at second-grade level. She couldn’t follow conversations, comprehend TV or absorb multiple, sensory stimuli. Migraines became an issue. Her personality changed from sociable and animated to reclusive and flat. For weeks, Rohlf rested at home to avoid the chaos of the everyday world. She remembered her former self and was deeply frustrated by her current condition.

Progress was painfully slow, despite cognitive therapy to learn techniques for coaxing language from her brain (can you smell it or hear it?) and environmental desensitization experiences (10 minutes in a Walmart).

A neuropsychologist recommended Rohlf postpone senior year, saying the healing process could take a year, with little improvement expected after that. And it was unlikely that she would improve at all after two years.

“They said I should prepare myself for the fact that I might never be able to return to school and may need to find other ways to be independent,” Rohlf said. “It was rough to hear that I’d have a completely different life.”

If there was any good news to be found in all this, it was that she needed only one course to graduate from high school. And Kennedy High provided every accommodation possible, from permitting her to carry a cell phone in class to granting her extended time to complete assignments. Despite her tenacity, Rohlf was unable to handle the classroom. She completed her course online — and graduated with salutatorian honors.

Rohlf may well be the only person you'll meet who asked for an overhead projector for her 11th birthday. Her lifelong passion was to be a teacher. She felt a calling to teach children and couldn’t imagine doing anything else.

Considering how little she had improved in the year following the accident, many of Rohlf’s doctors advised against college. But she was determined to try. Her parents knew she would push herself to her limits and wanted to protect her from disappointment, but they supported her decision.

Rohlf started at Iowa State on a seven-year plan to graduation, taking six credits the first semester. Aware of her impairments, staff and faculty “went above and beyond” to adapt to her special needs.

John Hirschman in the Student Disability Resources office assured Rohlf and her parents that “we are going to do whatever we can for her so she can be here.”

Recorded textbooks were made available in order to expedite her mental processing … meals were delivered to her room so she avoided dining hall clatter … class sections were changed to streamline complex walking routes … exams were given in quiet rooms with extra time allowances.

Hirschman “set things up beautifully for every possibility for my success,” Rohlf said. “He advocated for me like crazy, getting any accommodation I needed and more than I needed just in case I would need it.”

Activities like riding on CyRide or grocery shopping could stop Rohlf dead in her tracks. She couldn’t wing it. If she missed her bus stop due to her slowed processing speed and sensory overload, she’d call her mother, who in turn would scan a route map to direct her, or call one of her daughter’s ISU friends to assist her.

“Friends who took me to the grocery store were especially patient,” Rohlf said. “There were so many things to process at once. I could get overwhelmed deciding between 10 different cans of mandarin oranges. It would take forever to buy a few items for my dorm room.”

At “overload” times like those, Rohlf would get stuck mentally, she said. “I couldn’t think what my next step would be. My brain would turn off … it just stopped.”

By the end of her first semester, it was clear Rohlf couldn’t continue to major in education, because the commotion of an elementary school classroom would be more than she could handle.

Lynette Plander in the university’s vocational rehabilitation office guided her to the child, adult and family services major. Rohlf could still work with children, but one-on-one in a nonprofit or agency setting. Even so, letting go of her dream to be a teacher was devastating.

It had been nearly two years since the accident, and Rohlf was anything but fully recovered. Knowing no further improvement could be expected, her parents counseled her to “rally around an alternative” career path. But their daughter was not ready to quit.

“I felt really strongly that I wanted to come back and be as independent as possible,” she said.

It may not have been a logical decision, but it was a courageous one. She struggled through a second year much like the first, leaning on her mother, faith and friends, taking one step at a time.

Her Iowa State support system stood beside her every step of the way, she said.

“I couldn't have done it without multiple staff beside me. Many profs had to accept making accommodations for me,” she said. “Lynette at voc rehab or John at disabilities would call to check that I had everything I needed. It was above and beyond.”

Call it what you will —a freak of nature, magical, miraculous or just plain awesome. Soon after the two-year anniversary of Rohlf’s accident — that critical point when her improvement was supposed to come to a screeching halt — the exact opposite happened.

“Fall of my junior year, things started to improve. I don’t know why,” she said. “The doctors were happy, but said that with head injuries, you just never know.

“In six months, it was boom. I went from taking six credits to 16. I healed fully and very, very quickly,” Rohlf said.

She called it “snowballing.” Once her mental processing speed improved, her writing got faster. One little improvement led to another. She could have two things going on at once without feeling overwhelmed, then three things.

“The new normal was that I could always add one more thing,” she said. “Something that had been uncomfortable before, wasn’t, and then it became normal.”

Rohlf added other favorites back into her life. She was ecstatic to be able to sing again and joined Iowa State choir, Lyrica. And she could participate more at The Salt Company, where she met her future husband, Andrew Rohlf, an Ames native who graduated from Iowa State in 2013.

A most jubilant day was when she was approved to change her major back to early childhood education.

“I cried. My mom cried. It was a huge victory to know that I would be able to fulfill my dream and become a teacher,” Rohlf said.

“So many times I went to my adviser, Lisa Sharp, to change my graduation plan from seven to six years and finally to 4 1/2 years,” she said. “She always did it joyfully, even though it meant more work for her. Lisa has been a big help to me through it all,” Rohlf said.

Rohlf student taught in the Cedar Rapids area, plans to sub there in the spring and begin applying for positions. Her journey has changed her. She appreciates and enjoys all life has to offer. Even “getting” to write lesson plans brings her great happiness. And she knows what it’s like to endure an “unseen injury.”

“This experience has helped mold my heart to want to work with students with special needs. My injury was something that was not visible to the eye — much like children with learning disabilities and behavioral disorders,” she said.

“The fact that I can feel the frustration or disappointment that they’re feeling makes me better able to encourage them. I can tell them ‘you can do this, we’ll get you there,’” Rohlf said.

So like Iowa State stepped alongside me, it’s my heart’s desire to step alongside my students to help them succeed and thrive in school. People at Iowa State knew I could do it, and that I just needed to do it differently. They did everything they could to help me succeed.”

"People at Iowa State knew I could do it, and that I just needed to do it differently. They did everything they could to help me succeed."