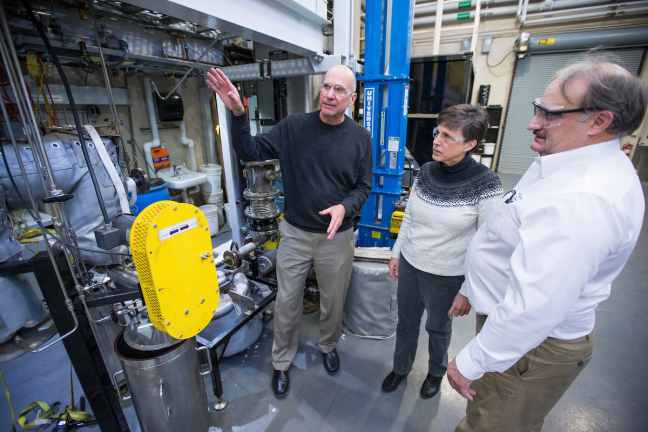 The recently announced advanced manufacturing institute is dedicated to improving the productivity and efficiency of chemical manufacturing. Those improvements could include combining processes such as mixing, reacting and separating into single steps.

Such process intensification could boost manufacturing productivity while cutting costs and reducing waste. That could save the chemical industry more than $9 billion annually, according to the U.S. Department of Energy’s announcement of the institute.

The new institute will be known as RAPID, the Rapid Advancement in Process Intensification Deployment Institute. The American Institute of Chemical Engineers in New York City will lead the effort, which was developed in collaboration with the U.S. Department of Energy’s Savannah River National Laboratory in South Carolina and the Georgia Institute of Technology in Atlanta. Additional information about the RAPID Institute and its objectives can be found at www.processintensification.org.

On Dec. 9, the U.S. Department of Energy announced it would support the institute with $70 million over five years, subject to federal appropriations. Another $70 million is expected from RAPID’s partners, including companies, universities, laboratories and other organizations.

“This institute is intended to take technologies – ideas that are well beyond basic research – and translate them into workable processes that can be demonstrated in the field,” said Robert C. Brown, the director of Iowa State’s Bioeconomy Institute, an Anson Marston Distinguished Professor in Engineering and the leader of RAPID’s Distributed Biorefinery program.

In addition, she said the Iowa State team has already pulled in multiple partners willing to help commercialize distributed biorefineries.

“We can make big leaps with shared funding instead of small steps with individual projects,” Fletcher said. “We’re very focused on the commercial value of this work, and Iowa State gets that.”

The proposal that won the Department of Energy’s approval includes $8 million to support development and testing of biorefineries that that feature modular design and construction for ease of manufacturing and mass production. Two possible projects highlighted in the application include:

Brown said both projects and the dollars associated with them are still subject to final contract negotiations between the Department of Energy and the leaders of RAPID. But he says they’re good candidates to move ahead.

“We believe these projects fit the institute well and can very quickly advance,” Brown said. “These are also projects that will be developed at a scale that addresses the commercially significant issues.”

As for the entire RAPID effort, the Department of Energy sees the new manufacturing institute as a problem-solver for America’s chemical industry.

“Our investment in this cross-cutting technology is an investment in the future of U.S. manufacturing,” said David Friedman, acting assistant secretary of the Department of Energy’s Office of Energy Efficiency and Renewable Energy, in a statement announcing the institute. “As we expand the Manufacturing USA network, we provide greater opportunities for businesses of all sizes to solve their toughest technology challenges and unleash major savings in energy-intensive sectors like oil and gas, pulp and paper-making and other industries.”

Iowa State will lead the biorefinery program of the country's 10th -- and just recently announced -- Manufacturing USA Institute. The institute is dedicated to improving the productivity and efficiency of chemical manufacturing. The U.S. Department of Energy will support the institute with $70 million over five years, subject to federal appropriations. Another $70 million is expected from the institute's partners.

“This institute is intended to take technologies – ideas that are well beyond basic research – and translate them into workable processes that can be demonstrated in the field.”

“We can make big leaps with shared funding instead of small steps with individual projects."