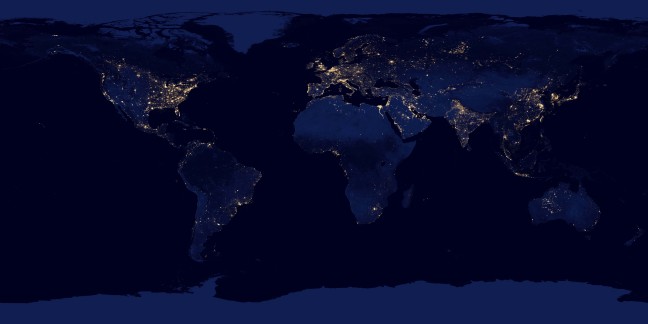 Trends in urban population density will help to shape global energy use in the coming decades, according to newly published research. Image credit used with permission from NASA Earth Observatory/NOAA NGDC. Larger image.

AMES, Iowa – Changing population densities in urban areas across the globe could have major implications for building energy use and sustainability in the decades to come, according to a new study published by a team of international researchers that includes two Iowa State University scientists.

The research team studied global urban population densities and associated energy use through the creation of intricate computer models that analyzed multiple scenarios, said Yuyu Zhou, an assistant professor of geological and atmospheric sciences and co-author of the study. It’s the first global-scale analysis of future urban population densities and associated building energy use, Zhou said.

“Getting a handle on building energy use in the decades to come will help to answer questions about sustainable urban development,” he said.

The models made projections through 2050 and found that evolving urban densities will have the greatest effect in determining building energy use in developing regions, Zhou said. In general, as urban areas become less dense, they require more energy to heat and cool. In developed nations, the adoption of new energy efficient technology will play a roughly equal role in urban building energy use, Zhou said.

“Ideally, we want to save energy in the future, and studies like this one can show us how building energy use changes as our cities grow,” Zhou said.

Annual energy use for heating and cooling in North America will increase between 15 and 30 percent, according to the paper. The region that includes China, Cambodia, Korea, Laos, Mongolia and Vietnam would increase between 35 and 50 percent, overtaking North American energy use across nearly all of the scenarios examined in the study, but that region also has the largest potential for savings.

The study found retrofitting aging urban infrastructure with updated and energy efficient technology has a role to play in improving the global energy outlook, but the study suggested that waiting to retrofit buildings until energy-saving technology becomes more widely available could lead to greater long-term energy savings.

The paper was published this week in the peer-reviewed academic journal Proceedings of the National Academy of Sciences.

Changing population densities across the globe will impact world energy efficiency, according to a new study published by an international team that includes two Iowa State University scientists.

“Getting a handle on building energy use in the decades to come will help to answer questions about sustainable urban development.”