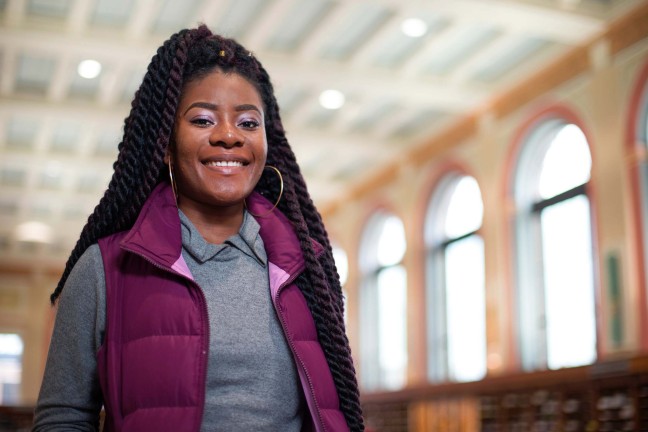 Faith Gaye, an ISU junior in kinesiology and health, will take part in a semester-long program aimed at encouraging undergraduates from underrepresented populations to pursue careers in toxicology. Photo by Christopher Gannon. Larger image.

AMES, Iowa – A new effort led by an Iowa State University veterinarian will kick off this semester to mentor undergraduate students from underrepresented populations with an interest in toxicology.

The semester-long program, a collaboration with Tuskegee University and the Ohio State University and funded by a grant from the National Institutes of Health, will link undergraduate students with aptitudes in science and mathematics with professional toxicologists in academia, government and industry.

Wilson Rumbeiha, a professor of veterinary diagnostic and production animal medicine and certified toxicologist, said the Toxicology Mentoring and Skills Development Training Program is a proof-of-concept project aimed at encouraging students from underrepresented communities to consider careers in toxicology.

“We want to create a pipeline of underrepresented groups into the workforce as toxicologists,” Rumbeiha said. “The profession of toxicology and the nation as a whole benefits from a more diverse workforce.”

A total of 15 undergraduates, including eight from Iowa State and seven from Tuskegee University, will participate in the initial semester of the program, which begins with a three-day workshop at Iowa State that starts Jan. 12.

Rumbeiha said the students will meet their mentors, get to know one another and tour the laboratories and toxicology facilities at the ISU College of Veterinary Medicine during the event. They’ll also attend presentations and meet ISU faculty and graduate students.

Faith Gaye, a junior at Iowa State studying kinesiology and health, said she hadn’t considered a career in toxicology until she learned about the program, but the opportunity for mentorship drew her to join.

Gaye, a graduate of Hoover High School in Des Moines, participated in Science Bound, an ISU program that empowers high school students of color to pursue degrees and careers in STEM-related fields, before starting at Iowa State.

She said she’s had an interest in biology for years, and she hopes the mentorship she receives in the toxicology program will prepare her to mentor younger women who want to study scientific disciplines in the future.

“As a woman of color, I hope other women like me can see a program like this and want to get involved,” Gaye said. “I hope they think, ‘If she can do it, I can do it, too.’”

Program participants will complete online coursework related to toxicology, attend a major toxicology conference in Baltimore in March and travel to their mentor’s place of work for a one-on-one job shadow. They also will present at a capstone event at Tuskegee University. Rumbeiha said the online coursework modules designed specially for the program also will become available to the public as a means of increasing the visibility of toxicology.

“Currently, there are few opportunities to expose undergraduates to toxicology, and we want to change that,” he said.

Rumbeiha said the program will continue during the next academic year, during which it will cover two full semesters. He said he’d like to expand the program to include more schools and institutions in the future.

He said underrepresented populations, which often include communities of color, recent immigrants and economically disadvantaged people, experience environmental toxicants at a disproportionately high frequency. It’s important for these students to enter the discipline and work toward solving the problems, he said.

A new collaboration involving Iowa State University, Tuskegee University and the Ohio State University seeks to mentor undergraduate students from underrepresented populations with an interest in toxicology. The program launches with a three-day event at Iowa State.

“As a woman of color, I hope other women like me can see a program like this and want to get involved. I hope they think, ‘If she can do it, I can do it, too.’”