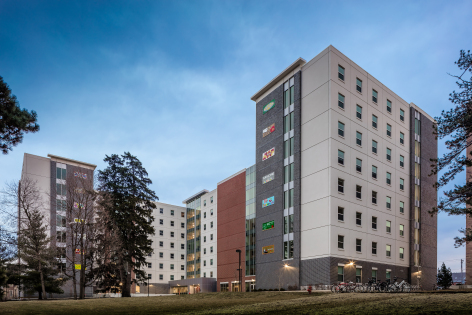 Students moved into the $47.3 million, eight-story, 784-bed residence hall earlier this month. The Iowa Board of Regents approved naming the building in honor of Geoffroy, Iowa State’s 14th president, last October. Geoffroy led the university from 2001 to 2012.

A legacy of leadership and commitment to students

"President Geoffroy led an era of growth and change at Iowa State marked by great achievements in enrollment, research, fundraising and faculty recruitment, despite difficult budget challenges,” said Iowa State University President Steven Leath. “He is lauded for his steady leadership and commitment to the university’s core values as a student-centered institution. For these reasons we are pleased to honor his legacy with the naming of our brand-new residence hall.”

Department of Residence Director Pete Englin added, “President Geoffroy was a great friend to our students, so naming this new student home is a perfect way to commemorate his legacy. The sooner we create meaningful connections among students, the more likely they are to graduate. The house system builds enduring relationships, and we’re delighted to add 14 more house communities that comprise Geoffroy Hall.”

Rooms with a view

Geoffroy Hall is located at 2152 Lincoln Way, next to ISU’s Buchanan Hall. The 392-room, 193,061-square foot structure was constructed over 19 months (May 2015-December 2016). It features floor-to-ceiling windows with sweeping views of campus.

"I am humbled and deeply honored to be recognized in this way," Geoffroy said. "I have so many wonderful memories of my time at Iowa State, especially the interactions and friendships I shared with Iowa State's students. They are the lifeblood of this university, and they make so many good things happen. I have always been very proud of all the students who are involved in the life of the university. And, I want to thank everyone who played a role in making this beautiful new residence hall possible."

Prior to Geoffroy Hall’s completion, the last traditional residence hall built at Iowa State was Martin Hall, in 2003. The last Department of Residence building project was in the Frederiksen Court apartment community in 2014.

Geoffroy Hall is 20 percent occupied this spring, and is expected to be at capacity for fall semester 2017.

“We were able to decide if we wanted suite-style or traditional rooms, where the bathrooms should be and what they would look like, how the common spaces could be best utilized, and much more,” he said. “This building is the embodiment of what the student voice can do at Iowa State.”

Bathrooms: Two per house with fully enclosed, individual shower and restrooms; one public 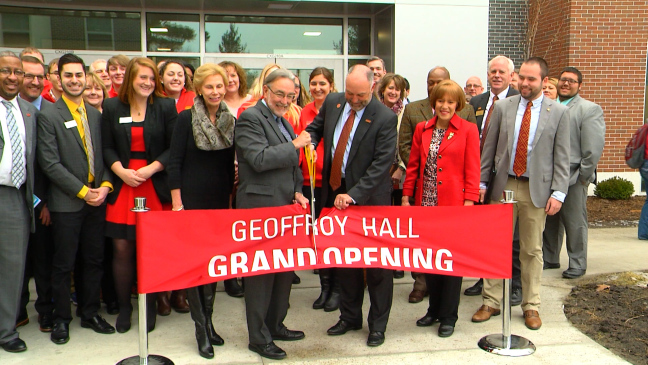