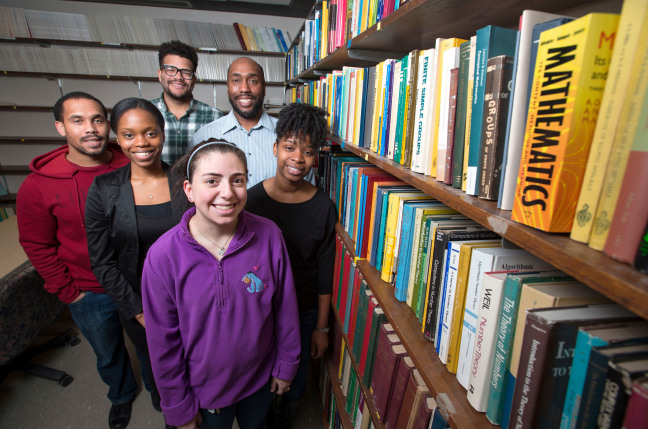 AMES, Iowa – The challenge of finding a solution to an unknown problem is what first piqued Shanise Walker’s interest in math.

It’s the type of challenge she expected and welcomed as a Ph.D. student in mathematics studying extremal graph theory at Iowa State University. But as a first-generation and underrepresented student, hundreds of miles from home, she also faced an entirely different type of challenge navigating the unknowns of a new college campus and culture.

“Coming from Georgia, I didn’t feel behind in my classes, but there was a difference in education and my preparation,” she said. “I also didn’t immediately connect with the other students. I found that what I consider a hardship may not be a hardship to someone else.”

Walker was recruited to continue her education at Iowa State after spending a summer in Ames as part of a Research Experiences for Undergraduates (REU) program. She credits Leslie Hogben, a professor of math and the department’s director of diversity, for making it a positive experience. It was Walker’s first opportunity to develop a research project, and that confirmed her decision to pursue an advanced degree. It also put Iowa State on her radar as an option for graduate school.

But moving to Iowa after graduating from the University of Georgia in 2012 was an adjustment. Cultural differences made basic aspects of the transition to a new school more daunting. For example, Walker says she arrived at Iowa State with clothing and other items she could cram into her suitcases. There was no rental trailer of furniture and dishes. Few of her fellow students could relate to what it was like to juggle the demands of graduate school while trying to furnish an apartment or acquire the necessary clothing for an Iowa winter.

It would have been easy for Walker to question her decision and consider a change of course. Instead, she tackled the challenge much like a complex math equation. Walker accepted an invitation to join and became a leader with MOCA – Mathematicians of Color Alliance – a student organization that at the time was still in the initial stages of developing its mission and purpose. It was just what Walker needed.

“MOCA provided that cultural connection and support I was looking for,” Walker said. “Many of us are far from home and first-generation students. Just having someone to talk to about cultural differences and relate to is very helpful.”

Effort to recruit and retain 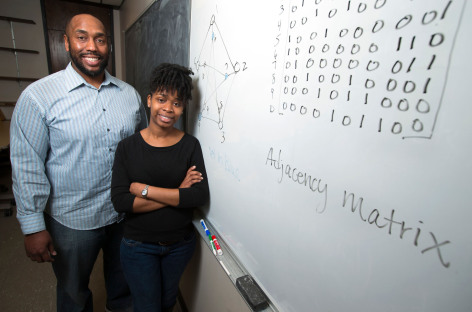 In the four years since its creation, MOCA has grown to around 10 members. That may seem like a rather small number on a campus of more than 36,000 students, but it’s large for a graduate program that has about 85 students. MOCA’s impact is reflected in the applications from students of color.

“People in other departments here on campus are in awe when they hear math is getting between five and 10 applications from students of color,” said Michael Young, an assistant professor of mathematics. “For some of these departments, the goal is just to get three underrepresented students to apply.”

Understanding the importance of recruitment and retention, Young shared his idea for MOCA with Hogben, who encouraged him to take the proposal to the department chair. But Young’s vision for the group was about more than boosting enrollment. He saw a need for a support system for underrepresented students – a need that’s not unique to Iowa State. Young dealt with many of the same challenges as a graduate student at Carnegie Mellon University in Pittsburgh.

“I identified myself as a strong math student, but I remember classes where I struggled. There was no one in my family I could talk to who would understand what I was going through. And most of my white friends were excelling,” Young said. “That’s one of the reasons I wanted to have MOCA. I wanted to provide an environment for students who were struggling to have that emotional, psychological and academic support.”

Not all struggles are academic, and what may seem minor for a majority of students on campus can be an obstacle for underrepresented students. Young says many students of color at Iowa State come from primarily black- and Hispanic-serving colleges and universities, where they are not the minority. Having MOCA here at Iowa State makes a difference, he said.

It may be the difference between a student who makes Iowa State home or transfers to another school. Without this type of support system, Young says things that happen outside of the classroom start to affect a student’s academic performance. MOCA has helped guarantee students are successful. Hogben says that combined with other initiatives, MOCA has also created greater awareness within the department.

“We went from being a well-intentioned but naïve department, to one that is more supportive,” said Hogben, who coordinates a similar program for women. “MOCA has been instrumental in retention by creating a community within a community and a safe place for underrepresented students.”

Hogben encourages other departments to build a pipeline to reach potential graduate students. She credits Thelma Harding, coordinator for graduate recruitment and retention and ISU’s McNair director, for assisting the department in these efforts. A retention plan is also critical. Hogben says, “It is completely wrong to recruit without a retention piece in place.”

MOCA reaches out to new graduate students every fall to encourage them to get involved. The group organizes weekly study potlucks and various social events off campus. Walker and other student leaders are also preparing for one of their greatest recruitment efforts, sponsoring a Solve-a-Thon Jan. 26-29.

Walker says the purpose is to introduce potential graduate students to the department. Students will participate in a mini problem-solving course, learn about REU programs and have one-on-one time with students and faculty. The goal is give students a positive and personal experience so that they want to apply to the graduate program. Walker says they invited only nine students to the Solve-a-Thon, which is by design.

“We want to be intentional in our recruiting. We’ve looked at the student’s interest in graduate school and how each would fit in with what we’re doing here at Iowa State,” Walker said. “Their experience will literally make or break the decision for some of the students. Students are more likely to work hard and stay with the program if they feel like they belong. It’s not just about recruitment, but retention.”

Learn more about the Solve-a-Thon at: http://orion.math.iastate.edu/moca/solveathon/. MOCA received a RECRUIT grant from Iowa State’s Graduate College to sponsor the Solve-a-Thon.

The primary goal of the Mathematicians of Color Alliance, better known as MOCA, is to recruit and retain underrepresented graduate students. But this student organization is doing much more to mentor and help students make Iowa State home.

“MOCA provided that cultural connection and support I was looking for. Many of us are far from home and first-generation students. Just having someone to talk to about cultural differences and relate to is very helpful.”