Cristina Diaz, Aurora, Illinois, senior in interior design; Alexander Doppenberg, Spencer, senior in mechanical engineering; and Joshua Kurnia, originally from Jakarta, Indonesia, and now of Ames, senior in architecture, are among six teams of students from seven universities selected as finalists in the competition, sponsored by Walt Disney Imagineering to find and nurture the next generation of “Imagineers.”

In addition to Iowa State, the top teams represent Carnegie Mellon University, Howard University, Miami University, Savannah College of Art and Design, the University of California, San Diego; and University of Notre Dame. Twenty-one finalist students were awarded a five-day, all-expense-paid trip to Imagineering’s headquarters in Glendale, where they are presenting their projects to Imagineering executives and competing for monetary awards.

This year’s competition challenged students to apply the same design principles used in creating Disney’s theme parks, resorts and other attractions to develop new outdoor spaces within their own colleges or universities that could address the diverse needs of students, faculty and visitors while providing a respite from daily stress.

The Iowa State team’s “Hourglass” design is shaped like an hourglass turned on its side. The space features individual, geothermal “pods” belowground for a more private experience and an aboveground sitting area with heated benches where visitors can socialize in comfort year-round.

“Because time — or the perceived lack of it — is a major stressor, especially for college students, we wanted to play with the idea of stopping time,” Kurnia said. “An hourglass represents the constant ticking of time, but if you tip it on its side, the sand stands still; you’ve symbolically stopped time.”

The team chose a site in front of MacKay Hall on central campus for the project because “it’s an area most of us at the university pass through,” Diaz said. “We wanted to provide a space where guests could relax and enjoy the beauty of the seasons.”

The portion aboveground consists of ETFE film, a durable, transparent membrane that’s reflective on one side, stretched over aluminum tubing. People viewing it from the outside see themselves and the landscape reflected, while people inside can see through to the landscape.

“ETFE is a relatively new material used in buildings like the Beijing Water Cube (the 2008 Olympics swimming facility) and the U.S. Bank Stadium in Minneapolis,” Doppenberg said. “We used it in part to incorporate the idea of Iowa State researching new technologies.”

The team designed both daytime and evening experiences with special effects corresponding to the carillon bells ringing in the Campanile, Diaz said. “During the day, sand in the handrails moves every 15 minutes to subtly encourage people to resume their day (after pausing at the Hourglass). At night, the structure is lit up and every 15 minutes there’s a light effect that ties back into the hourglass and the idea of time on campus.”

Disney did not require teams to be multidisciplinary, but Kurnia, who entered the competition last year with a team composed of peers in architecture, thought working with other disciplines could make the project more successful. The three students capitalized on their complementary skill sets, including proficiency in different software packages, to create a cohesive design, he said.

“For Josh and me it was really interesting to bounce ideas off of each other,” Diaz said. “We have related backgrounds but different perspectives on things. And it was great to work with an engineer like Alex who could help us determine if it was actually possible to do what we were proposing.”

“We each took what we knew and collaborated really well,” Doppenberg said. “Usually in our engineering projects, we can speak on a really high level about componentry but have a low level of understanding of how the product will look. The design students can speak on a higher level about the look and feel of the project but have less understanding of the technologies. A big thing for me has been learning to work with people outside my own field and utilizing all of our skills to create a good presentation.”

All three students hope to work in the entertainment industry after graduation.

“We didn’t know each other before, but we have a lot of the same goals,” Diaz said. She has visited Disney parks with her family and “I want to be on the team that provides those kinds of experiences to other people and help other visitors feel the way I do when I go to the park.”

Doppenberg interned at Walt Disney World in Orlando, Florida, in the summer of 2015, and Kurnia is doing an internship there from January through June.

“During the internship I went on rides and started to think about ‘how do you make these?’ To be able to go to Glendale and interact with the Imagineers is a chance of a lifetime and the next step forward,” Doppenberg said.

“I’ve always wanted to work for Walt Disney Imagineering, and it’s so difficult and competitive, so this opportunity to see behind the scenes and potentially interview for a position is what I’m most excited about,” Kurnia said. 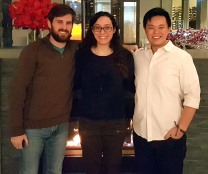