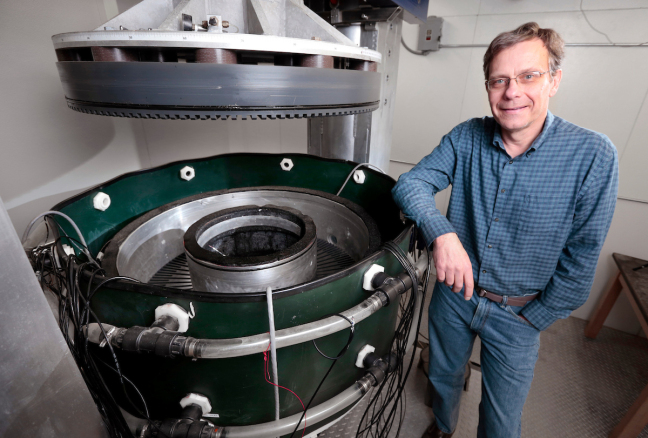 AMES, Iowa – Iowa State University’s Neal Iverson and an international team of researchers are working to help quantify the single biggest uncertainty in predicting how much glaciers will contribute to the rise of sea levels.

That uncertainty: how much will glaciers that flow to oceans speed up over the next century as the climate warms?

Iverson, an Iowa State University professor of geological and atmospheric sciences who has studied glaciers in Iceland and Norway, and the rest of the research team will look to lab experiments and field work to build more realistic computer models of glacier flow.

It’s all about getting a better, more accurate understanding of the physics involved in glacial ice moving to the seas in places such as Greenland and Antarctica.

“Glaciologists are trying to predict how fast glaciers will flow to the oceans,” Iverson said. “To do that, we need new lab and field data to include complexity in models that is usually neglected.

“These are complicated systems,” he said. “Modelling them is hard. But we need to include how water in ice affects its flow resistance, and we need sliding laws that are based on the real topography of glacier beds and that include rock friction. Adding these things really matters.”

Two new grants will help Iverson and his collaborators add that complexity.

Both grants are from the National Science Foundation, with funding from the United Kingdom’s Natural Environment Research Council to support the work of applied mathematicians at the University of Oxford in England.

Iverson is the lead investigator on both grant proposals. The other researchers are Lucas Zoet, an assistant professor at the University of Wisconsin-Madison and a former postdoctoral research associate at Iowa State; Ian Hewitt, an associate professor and university lecturer at Oxford’s Mathematical Institute; and Richard Katz, a professor of geodynamics at Oxford.

Iverson credits time spent at the Norwegian University of Science and Technology in 2015 as a Fulbright scholar with making it possible to coordinate the research team and lead the writing of the first of the two proposals.

The first project (a total of $926,178 over three years with $441,751 to Iowa State) will support studies of temperate ice, or ice at its melting point, and how this soft, watery ice resists deformation. That’s important because the resistance to deformation of temperate ice at the edges of ice streams – areas of rapid ice flow within the Antarctic ice sheet that can be hundreds of miles long and tens of miles wide – holds back the flowing ice.

“Results will improve estimates of the evolution of ice stream speed and geometry in a warming climate, and so improve the accuracy of assessments of the contribution of the Antarctic ice sheet to sea level rise over the next century,” the researchers wrote in a project summary.

The second project (a total of $551,084 over three years with $352,025 to Iowa State) will support development of better “sliding laws” to help predict the sliding speeds of glaciers and ice sheets. Sliding laws are the mathematical relationships between the glacier sliding speed and the factors that control it, such as the stresses below the glacier, the water pressure there, the topography of the glacier bed and the concentration of debris in glacier ice.

This project will include field studies of exposed glacier beds at receding glaciers in Canada and Switzerland.

“We need better data on the topography of real glacier beds and its variability from glacier to glacier,” Iverson said. “We’ll take those data, and with the help of a numerical model of slip at glacier beds, develop relationships that reflect the real range of sliding behavior expected beneath glaciers.”

Glacier in a freezer

Both projects will use the one-of-a-kind glacier sliding simulator Iverson has been using since 2009 to study glacier movement.

The machine is big – it’s more than 9 feet high. It’s also powerful – it can put as much as 170 tons of force on an ice ring eight inches thick and three in diameter. And it’s precise – motors can rotate the ice at speeds of 100 to 7,000 feet per year and circulating fluid can control ice temperature to 1/100th of a degree Celsius.

The new projects will add complexity to Iverson’s lab experiments. Debris, for example, will be added to the ice ring to study friction between it and the rock bed during sliding. In other experiments, temperate ice will be sheared between rotating plates to study how its resistance to flow depends on its water content.

“There is lots of water both at the beds of ice sheets and within them and that’s why parts of ice sheets can move unusually fast and dump lots of ice into the ocean,” Iverson said. “We hope these new projects will boost efforts to predict the fast flow of glaciers and its major effect on sea-level rise.”

Iowa State's Neal Iverson, who has studied glaciers in Iceland and Norway, is working with an international team on two projects that aim to build more realistic computer models of glacier flow. The researchers hope to understand how glaciers will speed up over the next century as the climate warms. They say that could help them predict how much glaciers will contribute to the rise of sea levels.

“We hope these new projects will boost efforts to predict the fast flow of glaciers and its major effect on sea-level rise.”