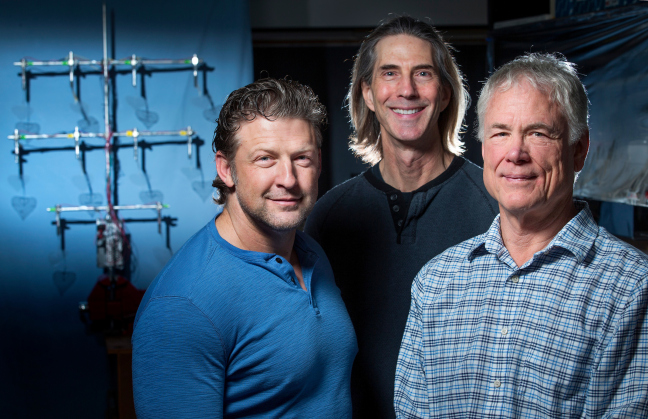 Curtis Mosher (left), Eric Henderson (middle) and Mike Mcloskey (right) have assembled a prototype biomimetic tree that produces electricity. Such technology could appeal to a niche market in the future, according to the researchers. Photo by Christopher Gannon. Larger image.

Iowa State University scientists have built a device that mimics the branches and leaves of a cottonwood tree and generates electricity when its artificial leaves sway in the wind.

Michael McCloskey, an associate professor of genetics, development and cell biology who led the design of the device, said the concept won’t replace wind turbines, but the technology could spawn a niche market for small and visually unobtrusive machines that turn wind into electricity.

“The possible advantages here are aesthetics and its smaller scale, which may allow off-grid energy harvesting,” McCloskey said recently in his ISU laboratory. “We set out to answer the question of whether you can get useful amounts of electrical power out of something that looks like a plant. The answer is ‘possibly,’ but the idea will require further development.”

McCloskey said cell phone towers in some urban locations, such as Las Vegas, have been camouflaged as trees, complete with leaves that serve only to improve the tower’s aesthetic appeal. Tapping energy from those leaves would increase their functionality, he said.

In a paper published this month in the peer-reviewed academic journal PLOS ONE, the ISU research team delves into the world of biomimetics, or the use of artificial means to mimic natural processes. The concept has inspired new ways of approaching fields as varied as computer science, manufacturing and nanotechnology.

It’s unlikely that many people would mistake the prototype in McCloskey’s laboratory for a real tree. The device features a metallic trellis, from which hang a dozen plastic flaps in the shape of cottonwood leaves.

Curtis Mosher, an associate scientist at Iowa State and co-author of the paper, said it’s not that great of a leap from the prototype the researchers built to a much more convincing artificial tree with tens of thousands of leaves, each producing electricity derived from wind power.

“It’s definitely doable, but the trick is accomplishing it without compromising efficiency,” Mosher said. “More work is necessary, but there are paths available.”

Small strips of specialized plastic inside the leaf stalks release an electrical charge when bent by moving air. Such processes are known as piezoelectric effects. Cottonwood leaves were modeled because their flattened leaf stalks compel blades to oscillate in a regular pattern that optimizes energy generation by flexible piezoelectric strips.

Eric Henderson, a professor of genetics, development and cell biology who also works on the research team, envisions a future in which biomimetic trees help to power household appliances.

Such biomimetic technology could become a market for those who want the ability to generate limited amounts of wind energy without the need for tall and obstructive towers or turbines, Henderson said.

But McCloskey said making that vision reality means finding an alternative means of mechanical-to-electrical transduction, or a scheme for converting wind energy into usable electricity. The piezo method adopted for the ISU experiments didn’t achieve the efficiency the technology will need to compete in the market.

Piezoelectricity was an obvious place to start because the materials are widely available, Henderson said. But taking the next step will require a new approach.

Other transduction methods such as triboelectricity, or the generation of charge by friction between dissimilar materials, work at similar efficiency and can power autonomous sensors. However, McCloskey said it will require much greater efficiency – and further research – to produce a practical device. 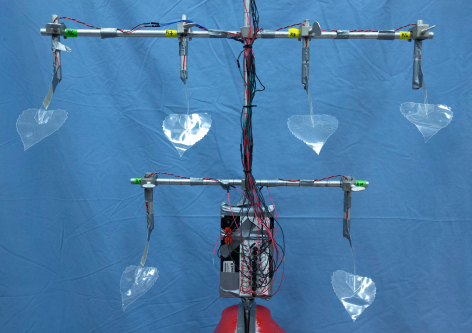 ISU researchers have built a prototype biomimetic tree that generates electricity when wind blows through its artificial leaves. The researchers think such technology may help people charge household appliances without the need for large wind turbines.

“The possible advantages here are aesthetics and its smaller scale, which may allow off-grid energy harvesting. We set out to answer the question of whether you can get useful amounts of electrical power out of something that looks like a plant. The answer is ‘possibly,’ but the idea will require further development.”