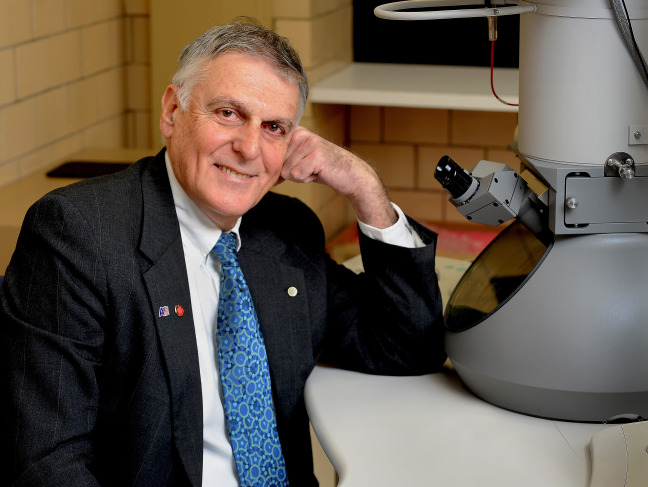 Dan Shechtman with one of the tools of his science, a scanning transmission electron microscope in Wilhelm Hall. Larger photo. File photo by Bob Elbert.

AMES, Iowa – Dan Shechtman, winner of the 2011 Nobel Prize in Chemistry, will return to the Iowa State University campus to share his ideas about science, technology and entrepreneurship as drivers of peace and prosperity.

Shechtman’s lecture, “Technological Entrepreneurship: A Key to World Peace and Prosperity,” will be at 5:30 p.m., Monday, Feb. 6, in the Great Hall of the Memorial Union. The event is free and open to the public.

During a similar campus lecture in 2013, Shechtman told the audience about a class in technological entrepreneurship he’s taught in Israel for about 30 years. That class has attracted as many as 600 students and features entrepreneurs telling their stories and professionals speaking about the law, management and marketing of startups.

“Universities like Iowa State need to teach engineers and scientists how to open startups and infect them with the bug of entrepreneurship,” Shechtman said.

The combination of science, technology and entrepreneurship can jump-start the economies of developing countries, he said. And that can help build peace and prosperity around the globe.

Shechtman won the Nobel Prize for his 1982 discovery of quasicrystals, crystalline materials whose atoms don’t line up periodically like every other crystal studied by modern crystallography.

"For 70 years until 1982, all crystals studied, hundreds of thousands of them, were found to be periodic," he said when his Nobel was announced in October 2011. "Only certain rotational symmetries are allowed in this periodic array and these are 1,2,3,4,6 and nothing else. This is why, when I saw the ten-fold rotational symmetry, I was so surprised."

Shechtman did follow-up experiments to confirm his findings and published his discovery in 1984. His work was widely questioned.

But he persevered and “his battle eventually forced scientists to reconsider their conception of the very nature of matter,” according to the press release from the Royal Swedish Academy of Sciences announcing Shechtman’s Nobel.

Shechtman’s Iowa State lecture is co-sponsored by the College of Engineering, the department of materials science and engineering and the Committee on Lectures, which is funded by Student Government.

More information about Iowa State lectures is available online, or by calling 515-294-9935.

Nobel Laureate Dan Shechtman of Iowa State, the Ames Laboratory and Israel's Technion will give a public lecture linking technological entrepreneurship to world peace and prosperity. The lecture will be at 5:30 p.m., Monday, Feb. 6, in the Great Hall of the Memorial Union. The event is free and open to the public.

“Universities like Iowa State need to teach engineers and scientists how to open startups and infect them with the bug of entrepreneurship.”