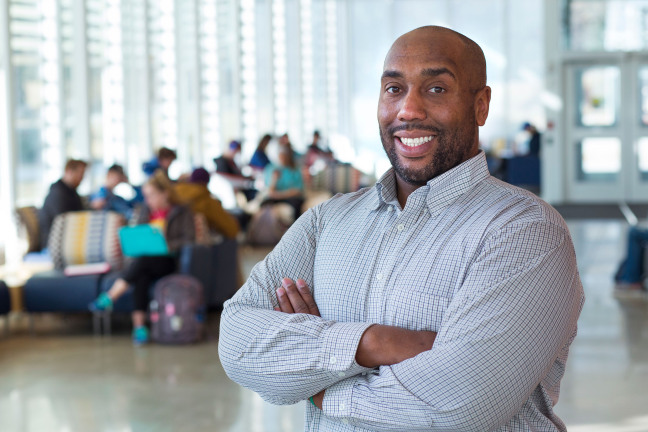 Michael Young is working with teachers to bridge the cultural divide in the classroom and help underrepresented students learn. (Larger image) Photo by Christopher Gannon

AMES, Iowa – Michael Young wants to help students excel in science, technology, engineering and math by bridging the cultural divide that exists in many public schools. The fact that it exists is not intentional, but Young says we need to acknowledge it in order to move forward.

Young’s motivation stems from his own childhood experiences. He knows how this cultural gap can limit student achievement and foster misconceptions about why students of color do not succeed in the classroom. Through his involvement with the DEBT-M program, Young is working to erase these stereotypes by helping teachers understand cultural differences related to trust, respect and peer acceptance.

“We need to start with human interaction and building relationships. Once that happens, we can elevate to the academic and educational relationship, which gives students opportunities to thrive,” said Young, an assistant professor of mathematics at Iowa State University.

DEBT-M – Designing for Equity By Thinking in and about Mathematics – is a collaboration of researchers and middle and high school teachers in the Pittsburgh Public School District working to make math classes equitable for students of color. The National Science Foundation funds the five-year initiative, now in its fourth year. Young joined the effort as a postdoctoral researcher at Iowa State affiliated with the Alliance for Building Faculty Diversity in the Mathematical Sciences program. He spends summers in Pittsburgh working with teachers.

While the focus is on math, Young says the cultural differences among students and teachers is critical to the conversation. Around 80 percent of the students in Pittsburgh are black, while 75 percent of the teachers are white, he said. Many of the students come from single-family homes and neighborhoods in which education is not always a priority.

These socioeconomic factors have a dramatic impact on education, Young said. It is difficult for students to learn if they’re always late to school, hungry, wearing dirty clothes or have a mother who is never home. Teachers cannot change these circumstances, but if they recognize the issues exist, they can work with students to overcome these challenges, Young said.

It’s not unusual to hear someone say he or she is “colorblind” when discussing race. While some people may think it’s the politically correct thing to say, Young takes issue with this statement. To pretend we are all equal, regardless of skin color, ignores centuries of discrimination still felt today, he said.

It also ignores our differences, which can negatively affect the student-teacher relationship. There is a shared understanding of this relationship when both student and teacher are of the same race, Young said. For many white students, there is an expectation by the student, teacher and parents that the student will respect teachers and follow their instructions. However, Young says many underrepresented students come from communities in which respect must be earned for those not from within the community. If teachers do not recognize this, it creates a disconnect in which underrepresented students feel disrespected. Young says this cultural difference is a barrier to learning.

“Imagine you’re a young black man from an all-black neighborhood, with very limited interaction with white people. Now you have a white man or a white woman at the front of your classroom, and all you can think about is how that teacher is going to judge you. It makes it difficult to learn when you are worried about who you’re working with,” Young said. “I’m just learning this and I’ll be 40 in a few years. I can’t imagine trying to get a 10- or 15-year-old to have this conversation with their teacher.”

Through his work with DEBT-M, Young has found teachers who want to overcome these barriers, but often don’t know how to start the conversation. Building awareness and giving teachers the tools to address these cultural issues have led to positive changes in the classroom. For example, one teacher started going to football games. While she had no interest in football, many of her students and their families were at the games and it gave them a chance to connect, Young said. As a result, students felt a greater level of acceptance and respect and strived to do better in the classroom.

Young also shared the story of a teacher who set aside 20 to 30 minutes each week to talk about what was happening in the lives of his students and how it affected their performance at school. The teacher spent a lot of time asking questions and not dismissing the students’ concerns. Again, students felt their teacher cared, and in return, the teacher saw positive academic results.

“We spend a lot of time in our workshops helping teachers learn how to talk about race and difficult subjects. It’s a conversation that’s very difficult for most of the teachers and for a lot of people,” Young said. “For some teachers it’s obvious they’re learning and growing from having these conversations. We encourage them to ask questions, and to spend time in the community and learn about the student’s culture.”

Young’s commitment to the DEBT-M program goes beyond the time spent with teachers. When asked, he shares his own story with students – young men and women who reflect many of the struggles he faced at their age.

Young was in second or third grade when he first earned a perfect math score on a standardized test. He vividly remembers learning multiplication tables and having the patterns come to him naturally. The challenge of solving mathematical problems was rewarding, and Young says it was nice to stand out from his classmates, but that reward did not earn acceptance with family and friends.

Math was a way to escape problems at home, Young said – a way to get attention, because many of his family members did not make education a high priority. His parents divorced and his mother worked multiple jobs to support the family. While Young welcomed the attention from teachers, it didn’t help when it came to making friends. Young says in the black community, you are perceived as a weaker person if you do well school. This is especially true if your peers are not doing as well. That perception has not changed, and affects student performance in an attempt to fit in.

The judgment from his peers heightened when teachers placed Young in a gifted program. And it didn’t help that he was suddenly in a class with students at a similar skill level, but the only black student in the room. Young says he ultimately decided that education was going to be his path to success. Still even after earning his Ph.D., he feels the sting of discrimination.

“I’ve done everything I’ve been told to do to get ahead. I have a Ph.D. and I still feel like I don’t belong here. To me that’s not equal,” Young said.

That’s why Young is so passionate about programs such as DEBT-M, and the Mathematicians of Color Alliance, a student organization he helped start at Iowa State. He wants people to recognize that inequalities still exist, to have conversation about race and become an ally. Young says until society acknowledges there is a problem, it will be difficult to see real change.

“People don’t want to talk about race, because of fears they might offend someone. By acknowledging there’s a problem, people feel they’re a part of it, they’re causing it and they’re a bad person,” Young said. “We need a set of allies, people who are not just going to acknowledge, but at some point get others to acknowledge as well.”

Michael Young wants to help students excel in science, technology, engineering and math by bridging the cultural divide that exists in many public schools. The fact that it exists is not intentional, but Young says we need to acknowledge it in order to move forward. Young’s motivation stems from his own childhood experiences.

“We spend a lot of time in our workshops helping teachers learn how to talk about race and difficult subjects. It’s a conversation that’s very difficult for most of the teachers and for a lot of people.