Leath has served as Iowa State University’s president since January 2012. Under his leadership, Iowa State’s enrollment has grown to more than 36,660 students; a transformative, $1.1 billion fundraising campaign was launched; and the size of the ISU Research Park has more than doubled, expected to employ 5,000 people by 2025. Leath also has championed a high-quality student experience and diversity among students, faculty and staff. He has emphasized enhancement of Iowa State’s nationally recognized, 1,700-acre campus and its public art collection, one of the largest among U.S. public universities.

In a letter to the community, Leath conveyed his love for Iowa State along with his resignation as ISU’s president. He wrote that after much consideration, he and first lady Janet Leath viewed the opportunity at Auburn as “one we could not pass up” and realized “our destiny is in Alabama and leading one of the nation’s great land-grant universities to even greater prominence.”

Leath pledged to work closely with the Iowa Board of Regents to identify an interim president and begin a search for his permanent successor at Iowa State. His last day of employment will be between May 8 and June 2.

The Board of Regents will hold a special meeting soon to discuss the presidential transition at Iowa State. 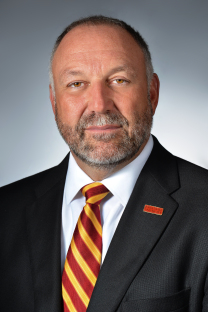