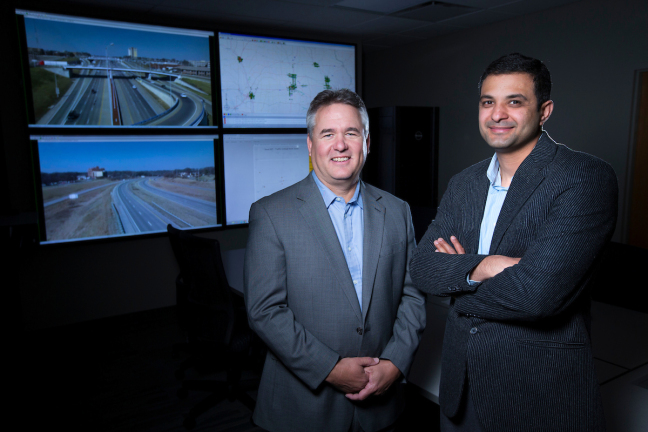 “There is more data than you could ever imagine coming out of this system,” said Neal Hawkins, the associate director of the Institute for Transportation. “We’re getting data every 20 seconds from all over the state, we’re getting high-definition camera feeds and we’re getting sensor information every minute.”

University engineers are helping the Iowa DOT by taking the data, analyzing it, making sense of it and finding ways to support improved decision-making, Hawkins said. 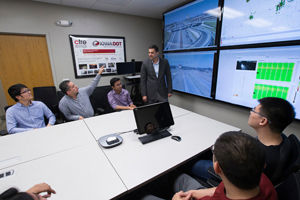 in the REACTOR lab.

One example of putting the data to use is development of a smart system for managing traffic when there’s a crash, a stalled vehicle or bad weather. Iowa State researchers are calling the system they’re developing TIMELI, or Traffic Incident Management Enabled by Large-data Innovations.

“The goal and outcome of TIMELI is to use emerging large-scale data analytics to reduce the number of road incidents through proactive traffic control and to minimize the impact of individual incidents that do occur through early detection, response and traffic management and control,” the Iowa State researchers wrote in a project summary.

Anuj Sharma – an associate professor of civil, construction and environmental engineering, a research scientist for the Institute for Transportation and the leader of the TIMELI project – recently pulled out his laptop and called up an example of the problems the new system is designed to solve.

His computer showed Iowa DOT video of Interstate 235 in Des Moines, near Polk Boulevard looking east toward Roosevelt High School: Traffic is heavy, but moving. Then there’s a crash in the right lanes of the westbound interstate. It’s hard to see the crash at first, but then traffic starts backing up.

At the Iowa DOT’s traffic incident management center in Ankeny – staffed 24 hours every day and tasked with scanning traffic and spotting problems across the state – an operator took a few minutes to spot the growing traffic problem a few miles west of downtown Des Moines, call for help and post warnings to traffic message signs.

“There’s no reason something like that couldn’t happen at five places across the state all at once,” Hawkins said. “It’s an overwhelming task. These operators can only monitor so many things at once.”

So why hasn’t some kind of automated system been developed to help monitor all that traffic data and quickly find problems?

“The technology was not there yet,” Sharma said. “In the last five years there has been so much progress in big data analytics. We can now process huge amounts of data and learn from it.”

Sharma means that literally – advancements in machine learning will allow the TIMELI system to learn from experience and find ways to do a better job analyzing the Iowa DOT’s data streams, finding incidents and maybe even predicting problems.

The researchers’ work to develop TIMELI is supported by a three-year, $1 million grant from the National Science Foundation.

Their goal is to develop a prototype of the system using the REACTOR lab as a test bed. The prototype would also be tested and evaluated within the Iowa DOT’s Traffic Management Center in Ankeny.

Most importantly, a working, robust TIMELI system could help every driver on the road.

“Use of the system by state DOTs can reduce the duration and impacts of incidents and improve the safety of motorists, crash victims and emergency responders,” the researchers wrote.

After all, Hawkins said, “When there’s a crash, every second is critical.”

Iowa State traffic researchers are developing technology that will take the huge amounts of data collected by the Iowa Department of Transportation, sort through it all and identify problems. The goal is early detection of traffic incidents and better traffic management. That would improve safety and mobility on Iowa's roads and highways.

“When there’s a crash, every second is critical.”

Neal Hawkins, associate director of the Institute for Transportation