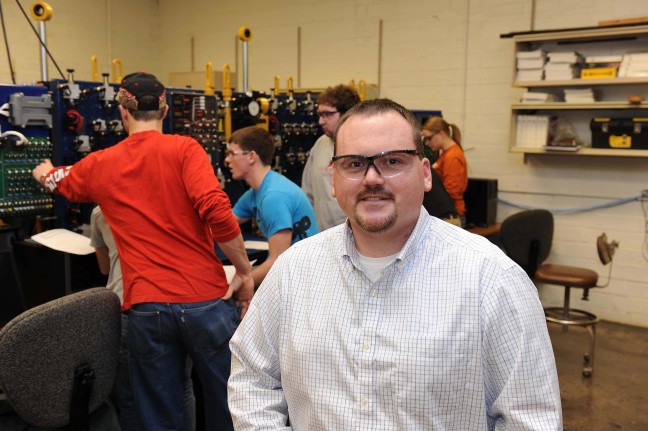 AMES, Iowa – Recent advances in how vast quantities of data can be captured and analyzed have transformed huge swaths of the economy, but it’s difficult to find an industry with more to gain from data management than agriculture.

Matt Darr, an associate professor of agricultural and biosystems engineering and the recently announced Kinze Manufacturing Fellow, and his research team have helped position Iowa State as an epicenter of innovation in harnessing data and information technology for agricultural applications. And few of those technologies languish on his drawing board for long. Rather, he emphasizes the importance of transferring the innovations pioneered at Iowa State to the consumers who need them.

Darr has partnered with some of agriculture’s top companies to turn ISU research into market-ready solutions. That fits seamlessly with Iowa State’s land-grant mission, he said, and it points toward a future in which farming is more efficient and environmentally sustainable.

“Our impact is greatest if we get our innovations widely distributed and in the hands of farmers,” Darr said. “If it never gets out of Ames, it hasn’t made agriculture better.”

Darr grew up on a farm in eastern Ohio, where his family raised livestock and grew row crops in addition to some fruits and vegetables. His upbringing inspired his passion for agricultural progress, but he doesn’t view the entire experience through rose-tinted glasses. He looks back on how farmers of decades past made decisions and sees a lot of room for improvement.

Historically, farmers were more likely to make management decisions based on how things have always been done, or based on what they see their neighbors doing, rather than on performance data and analytics.

“I experienced many of the great qualities that come with the rural lifestyle,” he said. “But farming in the 1980s also came with challenges.”

Darr said he wanted to pursue a career in agricultural machinery when he enrolled at Ohio State University. He later earned a master’s degree from the University of Kentucky before returning to Ohio State for a doctorate.

He arrived at Iowa State in 2008, drawn by the school’s strong reputation in both agriculture and engineering. He knew almost immediately that he wanted his work to have real-world impacts, and that meant reaching out to the ag machinery industry to look for areas where his research could make a difference.

“I knew that industry partnerships would be crucial in this field to create a sustainable research program focused on innovation and agricultural technolgy,” he said.

Darr said better data analytics allows farmers and ag companies to make decisions faster and better and to assess results more accurately. When DuPont built one of the first commercial-scale cellulosic biorefineries in the world in nearby Nevada, Iowa, the company needed to hammer out the logistics of gathering, transporting and storing the thousands of tons of corn stover needed to keep the plant operating year round. Darr and his research team developed a suite of business analytics and decision support tools delivered through a smartphone to coordinate some 250 personnel working to supply the biorefinery each year.

In 2015, technology developed at Iowa State and licensed to John Deere drew international acclaim by winning innovation awards at AGRITECHNICA, a global showcase of agricultural machinery in Hannover, Germany. Among those innovations was Deere Active Yield, a computer algorithm that Darr and his team helped to develop that automatically calibrates the combine yield monitor. The technology improves yield data accuracy by allowing the combine to adjust automatically and compensate for crop changes during the season.

ISU students get to work on industry-ready technology in the classroom, providing an advantage when they enter the marketplace, Darr said.

“Iowa State is a leader in empowering faculty who have a passion for applied research,” Darr said. “The flexible solutions that the university has in place for licensing and tech transfer demonstrate that commitment to seeing ISU innovations impact a global marketplace.”