AMES, Iowa – Back in the day, veterinary students had to get creative if they wanted to practice sutures on something that even vaguely simulated the feel of living tissue.

Some students would practice stitching up banana peels, said Frank Cerfogli, a clinical assistant professor in the ISU Department of Veterinary Clinical Sciences. Cerfogli said his solution during vet school involved practicing stitches on the arm of a couch. It wasn’t the most life-like simulation, he said, but it helped him build the muscle memory required to master various suture techniques.

Today, veterinary students at Iowa State have access to vastly more realistic options, though they may require a little less imagination.

Cerfogli is the coordinator for the ISU clinical skills laboratory, a facility housed in the Lloyd Veterinary Medical Center that’s home to an assortment of models on which veterinary students can practice medical procedures before working on real, living animals.

There’s Frosty, a life-size mockup of a cow inside which may be placed Snowflake, a life-size calf. There are model dogs, pigs and a horse – all of which allow students to familiarize themselves with the anatomy and equipment they’ll need to learn to become professional veterinarians. 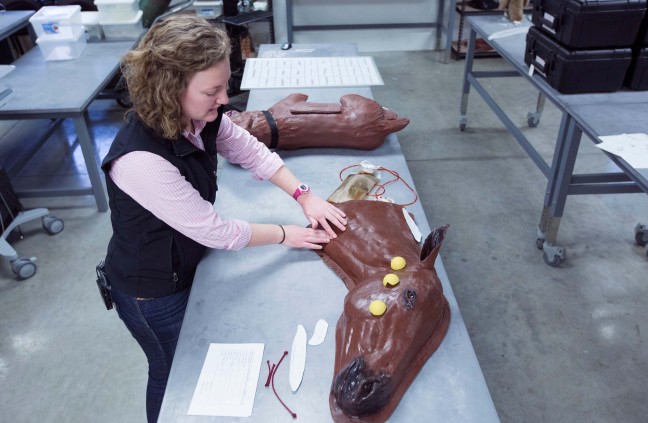 The laboratory opened about a year ago with 10 models and has since expanded to 30. Accordingly, students are making more use of the facility. Cerfogli said the laboratory drew about 30 visits from students in January 2016. This January, the laboratory attracted 400 students.

Cerfogli said the lab allows students who have just arrived at veterinary school to begin developing the motor skills they’ll need when operating on live animals.

“Students for the first time are practicing hands-on skills in their first year and second year that are really introductory to their surgical experience,” he said.

Cassie Klostermann, a fourth-year veterinary student graduating in May, said the lab provided her with valuable experience that allowed her to feel more confident when it was time to work with living animals.

“Before you come to vet school, most students don’t have experience sticking animals with needles,” Klostermann said. “It’s a skill set that’s totally different from what you can learn from studying a book or attending a lecture.”

On a recent morning in the lab, Klostermann demonstrated how to attach a chain to Snowflake’s hoof to help pull it free of its mother during delivery. Klostermann said attaching the chain at two different points minimizes the pressure on the calf and reduces the risk of injury to its joints and bones.

Klostermann also demonstrated how to intubate, or place a plastic tube into the windpipe of a model dog, to deliver anesthesia. She said doing so is an important step for a range of operations, from spaying to removing a diseased section of lung. She said practicing on the model helps students learn how to place the tube in a dog’s throat and gain familiarity with the parts and operation of the anesthesia machine. 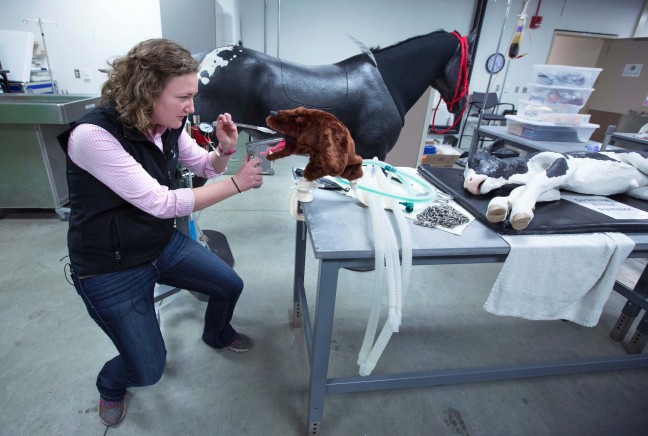 The other side of the lab houses a wide range of small rubber cylinders that mimic the texture of living tissue. The cylinders allow students to practice various suture techniques. Some of the simulations feature layers of textures that present students with the challenge of working with different internal tissues.

On a nearby table, a rubber simulation shaped like the front leg of a dog hangs next to a series of tubes that pump a red liquid into the “veins” of the model. Students must first find the cephalic vein in the dog’s paw and then draw “blood” with a needle.

Klostermann said the simulation allows students to get a feel for the right angle and depth for using the needle. But the simulation does have its limitations, she said.

“The one thing this doesn’t prepare you for is how much a horse will jump when you try and poke them with needles,” she said.

But it certainly beats practicing on the arm of a couch.

“Students for the first time are practicing hands-on skills in their first year and second year that are really introductory to their surgical experience.”