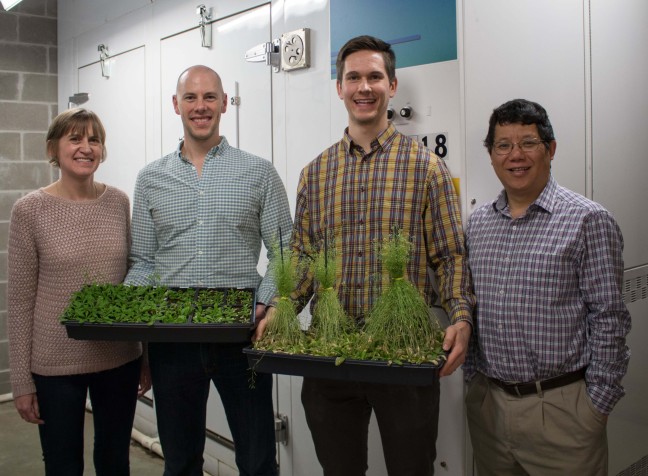 (From left) Diane Bassham, Justin Walley, Trevor Nolan and Yanhai Yin have worked together to map the molecular components that act as a bridge between plant stress and autophagy. Photo by Hao Jiang. Larger image.

The research, published today in the peer-reviewed academic journal Developmental Cell, shows that autophagy, a system by which both plants and animals recycle energy and molecular components, plays a key role in slowing plant growth during times of stress.

Yanhai Yin, a professor of genetics, development and cell biology and a Plant Sciences Institute Faculty Scholar, said plants slow their growth when they experience stress such as drought, a prolonged lack of sunlight or any other low-energy circumstance. But teasing out the genetic interactions that result in slower growth has puzzled scientists for years.

Yin and his colleagues have focused their research on a gene known as BES1, which promotes plant growth in response to a plant hormone called brassinosteroid. In their latest paper, the researchers demonstrate that stress sets off a series of reactions that allow autophagy to inhibit plant growth.

One of these reactions involves a protein known as DSK2 that acts like a bridge linking BES1 and the autophagy pathway, said Trevor Nolan, a doctoral student in Yin’s lab and the lead author of the paper.

Diane Bassham, a professor of genetics, development and cell biology and the Walter E. and Helen Parke Loomis Professor of Plant Physiology, also contributed to the research team.

“We have been studying autophagy for a number of years as a process for bulk digestion of cell contents during environmental stress,” Bassham said. “This recent work shows that it can also act in an exquisitely selective pathway for the digestion of a single growth regulator to coordinate growth with stress responses.”

Justin Walley, an assistant professor of plant pathology and microbiology, used a high-resolution analytical technique called mass spectrometry to monitor protein modification, which showed the targeting of BES1 to autophagy by DSK2 is modified by a protein called BIN2, another key player in the brassinosteroid signaling pathway.

“We’re really excited by the discovery that BIN2 modifies DSK2, and that this modification is actually responsible for controlling the balance between plant growth and plant stress responses,” Walley said.

Nolan said the discovery could help plant breeders create crop varieties that can continue to grow under stressful situations. But, because autophagy plays an important role in animals as well as plants, the research could have implications beyond plant science.

“Understanding the basic science of how these processes are regulated could have implications not just for plants but for human health as well,” Yin said.

This research was supported by the ISU Plant Sciences Institute and by a grant from the National Institutes of Health recently awarded to the team to continue studying the interaction between brassinosteroid and autophagy pathways.

ISU researchers are piecing together the genetic mechanisms that link plant growth and stress response. In a new paper, the research group links autophagy, an important energy recycling function, with slower growth during stress conditions. Autophagy plays a key role in animals as well as plants.

“Understanding the basic science of how these processes are regulated could have implications not just for plants but for human health as well.”