"The Apicenter" exterior view of an adaptive reuse design for an elementary school in Ogden. All images by Shawn Barron and Saranya Panchaseelan.

AMES, Iowa — A team of Iowa State University architecture graduate students is among the winners of the third annual AIA COTE Top Ten for Students competition sponsored by the American Institute of Architects Committee on the Environment (AIA COTE), the Association of Collegiate Schools of Architecture (ACSA) and View Dynamic Glass. More than 600 students from 38 schools participated in the competition this year.

The contest recognizes 10 student projects that demonstrate “creative and innovative integration of daylighting, materials, water, energy and ecological systems, through a cohesive and beautiful architectural understanding.” Entries are judged on how well they address 10 sustainability measures, such as regional/community design, land use and site ecology, bioclimatic design, energy flows and the concept of “long life, loose fit.” 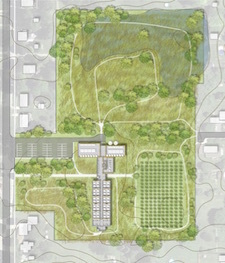 “The Apicenter,” a project by Shawn Barron, Sioux Falls, South Dakota, and Saranya Panchaseelan, Bangalore, India, is one of the 10 winning projects that will be on display April 27-29 at the AIA Conference on Architecture 2017 in Orlando, Florida, and exhibited again at the 106th ACSA Annual Meeting in Denver, in March 2018.

Barron and Panchaseelan developed their project in the fall 2016 Sustainable Building Design (Net Zero Design) graduate studio taught by Ulrike Passe, associate professor of architecture and director of the ISU Center for Building Energy Research. The class explores the relationships among architecture, cultural landscapes and biological issues and requires students to create projects that make efficient use of energy, water, materials and other resources — with the goal of achieving a net zero energy building design (one that consumes roughly the same amount of energy as it produces).

Eight teams of students in the class were challenged to develop adaptive reuse projects for three vacant Iowa school buildings — the former Manilla Middle School in Manilla and East Elementary School in Knoxville — and Howe Elementary School in Ogden, currently in operation but slated for possible closure due to consolidation within the district.

“The three buildings are from different eras, and especially Howe Elementary School in Ogden has been subjected to several additions that changed the passive energy systems — such as ample daylighting and natural ventilation,” Passe said.

“Particular challenges with this project related to how to upgrade and consolidate the building footprint for a new use that would retain some of the original character and history of the school while providing a flexible, functional space for the future,” she said. “Some of the schools are pretty lonely in how they sit in the community; students also had to develop strategies to tie the building back into the neighborhood.”

Barron and Panchaseelan’s proposal would transform Howe Elementary, a 1950s-era building with multiple renovations and additions, into a research and educational center focused on the revitalization and resiliency of honeybees and other bee species, as well as the revitalization of the Ogden community, which has seen its population decline as young adults and businesses move elsewhere, the students said in their competition submission.

“We wanted something that would tie the sustainable, earth-friendly concepts of the design requirements of both the class and the competition with the needs of Ogden and its people, and also provide an identity that could breathe some life back into the town,” Barron said.

The students toured the building twice, including crawling through the roof structure, and studied original blueprints and drawings from each of the renovations. They discovered original clerestory windows and other sustainable features that had been covered up with subsequent construction. They also interviewed a local entomologist and bee expert to determine the feasibility of their proposal and spoke with school staff and community members to learn what was important to retain in their design.

“Nearly everyone we talked to had attended this school and expressed sadness that it was being closed,” Barron said. “Because of this attachment, we didn’t want to tear too much down or give the building a dramatic facelift. We hoped that if this project were actually built, Ogden residents would still feel a sense of pride and ownership in their old school and its new use.”

In determining the program for their facility, the team did a considerable amount of research into bees, including life cycles, hive construction and maintenance, honey, habitat, and threats such as pesticides, viruses, parasites and Colony Collapse Disorder, which has devastated bee populations over the past decade.

The students’ proposal includes eight different bee research centers housed in existing classrooms; a community collaboration/education center; two production facilities for honey and other bee products, housed in the original and new gymnasiums; a wood shop to build hive boxes for researchers and backyard beekeepers; a greenhouse; and a small café and shop. Outdoor community gardens with porous paved pathways would invite the public to engage with the center and provide a source of locally grown food as well as bee forage.

The proposal removes many of the additions to the school and restores its original, energy-efficient state while reusing or recycling the demolished materials on site.

“The existing school has a well-devised geothermal system already underground. We incorporated that system and reduced the thermal envelope of our building so it would be enough for most of the necessary heating and cooling,” Panchaseelan said.

“We installed solar panels and swapped fixed windows for operable ones that can be controlled by humans inside for better ventilation. We also added roof gardens to direct runoff to the ground and an additional floor that was carefully placed to fit the existing structure. And we restored prairie to a portion of the 13-acre site as a way to reduce recurrent flooding and provide more forage for bees.”

The AIA COTE Top Ten for Students judges said the project “is an example of a strong retrofit with an eye toward environmental concerns. The apiary/community center idea shows good thought into the use of materials, and the endeavor to address larger issues, such as colony collapse disorder, is commendable.”

Iowa State architecture student teams have been selected for the AIA COTE Top Ten for Students every year of the competition. Three teams from Passe’s fall 2014 Sustainable Building Design studio were part of the inaugural competition in 2015. One team from the fall 2015 class was selected for the honor in 2016.

A team of architecture graduate students is among the winners of the third annual AIA COTE Top Ten for Students competition, which recognizes 10 projects that demonstrate “creative and innovative integration of daylighting, materials, water, energy and ecological systems, through a cohesive and beautiful architectural understanding.” “The Apicenter,”  is an adaptive reuse project for Ogden's Howe Elementary School. It will be on display April 27-29 at the AIA Conference on Architecture 2017 in Orlando, Florida, and at the 106th ACSA Annual Meeting in Denver, next March.

New use for old school 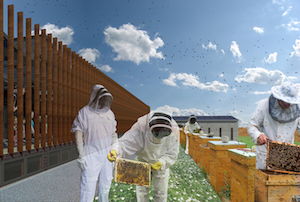 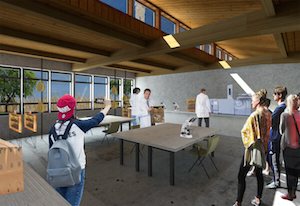 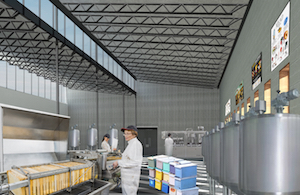 “Nearly everyone we talked to had attended this school and expressed sadness that it was being closed. Because of this attachment, we didn’t want to tear too much down or give the building a dramatic facelift. We hoped that if this project were actually built, Ogden residents would still feel a sense of pride and ownership in their old school and its new use.”