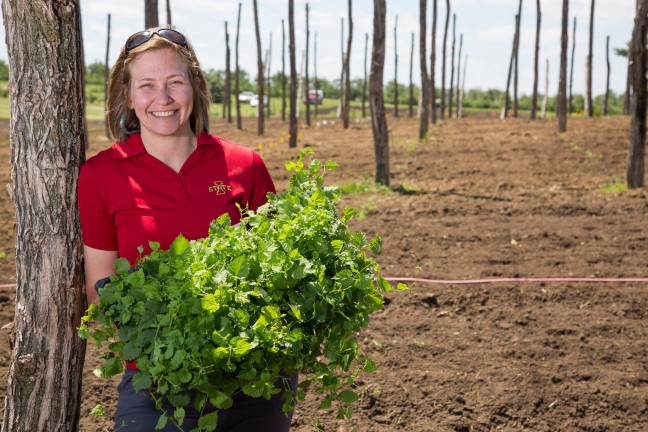 Diana Cochran, pictured in the hop yard at the ISU Horticulture Research Station, acknowledges the challenges Iowa hop producers face, but she believes that further research and refinement will allow Iowa hops to establish a niche in a growing market. Photo by Christopher Gannon. Larger image.

AMES, Iowa – Ask Diana Cochran about growing hops in Iowa, and she’s just as likely to tell you why it’s a bad idea as she is to explain how it’s done.

There’s little research concerning growing hops in Midwestern soils, for instance. No market yet exists for Iowa hops. And it takes several years for the plants to establish themselves fully.

Cochran, an assistant professor of horticulture at Iowa State, is brutally honest about the challenges hop growers face in the state. But she’s also convinced that Iowa hop growers can carve out a niche for themselves given enough time and dedication.

And that’s where Cochran’s research and outreach come into play. She’s figuring out how to tailor management practices to grow hops in Iowa’s soil and climate, and she’s connecting local hop growers with local brewers in an effort to foster collaboration.

Hop growing is a young enterprise in the state of Iowa, and Cochran sees serious potential.

Hops are flowering plants that grow as long vines. When cultivated, growers train the plants to wind their way around trellises in fields called hop yards. The flowers, also called cones, provide flavor and stability in brewing. They act as a preservative in other settings, and their aromatic qualities have contributed to deodorants. Cochran said she’s heard of couples using the flowers in wedding arrangements and centerpieces.

Cochran met growers across the state trying to perfect hop production when she came to Iowa State several years ago.  But there was little coordination or systematic research regarding how to grow hops in Iowa. Cochran said she saw a gap that she could fill.

“I found that people were growing it whether anyone was there to help them or not, and my department chair jokingly suggested I start looking at hops,” she said. “So I looked into it, and it seemed like there was enough demand in Iowa that the state could use someone with direct expertise.”

Cochran estimates there are around 40 growers producing hops in Iowa. Most of those growers cultivate between one and two acres, with the largest producer growing about 20 acres.

Iowa is capable of producing quality hops, she said. It’s just a matter of nurturing the industry and establishing a niche to fill in the market. She said many of the state’s growers are not only new to hops, but also new to farming as well. Accordingly, she said she tries to be as realistic as possible when talking to beginning growers.

“I tell them it’s harder to sell hops than, say, apples,” she said. “It’s going to take some time for an industry and a market to develop for an Iowa hop. You have to be in it for the long haul because you won’t make a profit right away. I also let them know that I’m here to help them mitigate the risk as much as possible.”

Cochran grew up in Mobile, Alabama. Working in her mother’s garden inspired an interest in plants at an early age, and she wanted to pursue landscape design when she started her undergrad work at Auburn University. She discovered she liked the research process and decided to pursue a doctoral degree in environmental stress physiology in food crops at Mississippi State. She also completed post-doctoral work on integrated pest management at the University of Tennessee.

Her education prepared her for a career that combines teaching and research with extension work. When a job for an extension fruit specialist opened up at Iowa State three years ago, she knew she’d found the right fit.

But not long into her time at Iowa State, she stumbled onto the opportunity in hops. Now that she’s added that to her portfolio, much of her research centers on a hop yard she’s established at the ISU Horticulture Research Station north of Ames.

She said much of what she learned working on fruits also applies to hops. Grapes and hops, for instance, share many of the same management practices, and growers of both plants deal with many of the same diseases, she said.

Cochran studies hop fertility and management practices with an emphasis on Midwestern soil and weather. Much of the current body of knowledge regarding U.S. hop production originates in the Pacific Northwest, where the hop industry is more established. Those northwestern soils, however, contain more sand than those in Iowa, and Cochran said many of the growing practices that work well in other regions should be adjusted for Iowa.

Cochran is looking at optimal nitrogen application rates for Iowa hops and experimenting with irrigation practices. She said she wants to lower the input costs as much as possible while still producing a quality product.

She’s also set up an advisory council that includes Iowa hop growers and local brewers. The advisory council opens up opportunities for communication and collaboration to establish a fledgling market for Iowa hops.