AMES, Iowa – Farmers faced with tight profit margins may consider cutting back on weed control efforts this growing season, but an Iowa State University agronomist said doing so may cost farmers money in the long term.

Robert Hartzler, a professor of agronomy and ISU Extension and Outreach weed expert, said low commodity prices in recent years may lead farmers to tolerate a low population of weeds that might not affect yields.

But doing so may allow enough weeds to go to seed in fields and give rise to the spread of herbicide resistant weeds in the future, a growing concern for corn and soybean producers across the state.

“Farmers might be tempted to do just enough to protect yields but still allow some weeds to survive,” Hartzler said. “They might be unwilling to spend the extra money to get to the next level of weed control, and, in the short term, you can rationalize that. But in the long term, that’s going to lead to further evolution of resistance.”

For years, the herbicide glyphosate made weed control a one-size-fits-all proposition for farmers, but Hartzler said most Iowa fields now experience pockets of weeds that are resistant to glyphosate. The resistance occurs when weeds that possess the right genetic mutations to survive the herbicide treatment are passed on to subsequent generations of weeds.

Hartzler said weeds are showing resistance to nearly all herbicides used in Iowa. Populations of the weed known as water hemp, for instance, have demonstrated resistance to five different groups of herbicides, he said.

Hartzler recommends farmers round out their weed control strategies with a variety of tactics and tailor decisions to individual fields. Rotating crops that have markedly different growth cycles compared to corn and soybeans interrupts the lifecycle of weeds as well, Hartzler said. A rotation of winter wheat, for example, presents an opportunity to combat weeds without the use of herbicides, though he acknowledges the strategy imposes expenses that may not work for many farmers.

Judicious use of tillage also can prevent weeds by burying seeds deeper into the soil where they can’t grow.

Hartzler also recommends that farmers scout their fields before and after applying herbicide to gauge how effective the treatment is.

“We’re in an era where you really have to pay attention to the details if you want an effective weed control strategy,” he said. 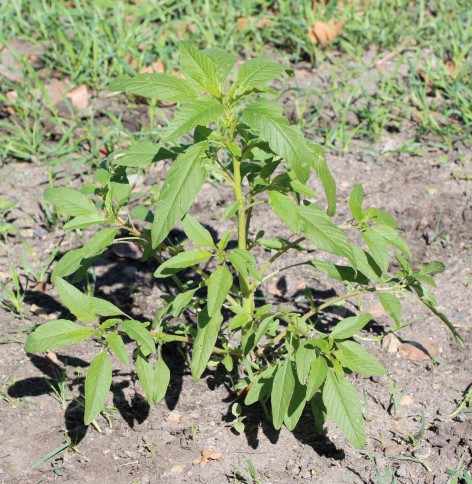 Some populations of water hemp, the weed pictured here, have demonstrated resistance to five groups of herbicides used in Iowa. An ISU agronomist is encouraging farmers to remain vigilant against weeds despite tight profit margins for corn and soybean producers this growing season. Photo courtesy of Robert Hartzler. Larger image.

Farmers may consider cutting corners with their weed management strategy this growing season to save money in the face of tight profit margins, but an ISU agronomist said doing so will encourage the development of herbicide resistance and cost farmers more in the long run.

“Farmers might be tempted to do just enough to protect yields but still allow some weeds to survive. They might be unwilling to spend the extra money to get to the next level of weed control, and, in the short term, you can rationalize that. But in the long term, that’s going to lead to further evolution of resistance.”