AMES, Iowa – A study from Iowa State University researchers casts new light on how biologists understand the likelihood of coextinction among plants and animals that depend on one another for survival.

The study, published recently in the peer-reviewed scientific journal Proceedings of the Royal Society B, focuses on mutualist networks, or webs of mutually beneficial interactions between plants and animals. Examples include fruit-eating birds that eat the fruit from trees while simultaneously helping to disperse the trees’ seeds.

Current models that examine these relationships have emphasized the possibility of co-extinction, or the extinction of one species leading to the demise of other mutualist species. But Haldre Rogers, an assistant professor in the ISU Department of Ecology, Evolution and Organismal Biology, said previous thinking rarely accounted for how dependent individual species are on their mutualist relationships.

The study, led by Evan Fricke, a postdoctoral researcher in Rogers’ lab, found that species with many mutualist relationships tend to be more dependent on those interactions for survival. On the other hand, species with few mutualists typically depend little on mutualistic interactions. Factoring that pattern into the equation adds a new dimension that upends much of the previous models, Fricke said.

Rogers said the study turned up good news in that many mutualist species aren’t as vulnerable as once thought. For instance, birds whose diets depend heavily on fruit usually eat fruit from more than one species of plant. That way, if one food source disappears, the bird has other options.

“Nature seems to have some backup plans when you need them,” Rogers said.

Fricke said the research could help guide policymakers to make better use of conservation dollars by highlighting relationships in ecosystems that play core functions and support a range of species.

“Previously, we thought that if you were a mutualist with one partner or few partners, you were really vulnerable to coextinction,” Fricke said. “So if disease or climate change or hunting wipes out that one partner, you’re out of luck. In actuality, species that naturally have few partners are less likely to experience coextinction because they depend very little on those interactions.”

The data utilized in the study came from synthesizing existing global databases on mutualist organisms as well as data gathered directly by the researchers on plant-seed disperser interactions in the Marianas Islands. The research team then simulated co-extinction events while factoring dependence into their models.

Fricke said this new understanding of the dependence on mutualistic relationships changes many of the conclusions biologists have drawn using existing network models.

“What makes species and networks resilient to coextinction is not how many partners species have or how interactions are arranged, as previously thought,” Rogers said. “It’s that species have evolved strategies that balance their dependence on their mutualists with the risk of losing those mutualists.”

“One of the really crucial details has been missing in previous network studies,” Fricke said. “And the conclusions of those studies flip when you include this detail.” 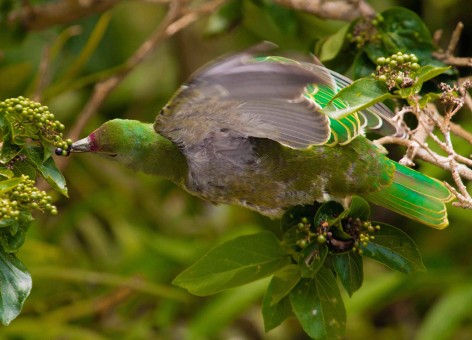 Fruit doves, like the one pictured here, share a mutualistic relationship with premna plants. The doves use the premna as a food source while helping the plant to disburse its seeds. Photo by Lainie Berry. Larger image.

Newly published research from ISU scientists shows many species may not be as susceptible to coextinction events as once thought. This new understanding hinges on how dependent individual species are on their mutualist relationships.

“Previously, we thought that if you were a mutualist with one partner or few partners, you were really vulnerable to coextinction. So if disease or climate change or hunting wipes out that one partner, you’re out of luck. In actuality, species that naturally have few partners are less likely to experience coextinction because they depend very little on those interactions.”