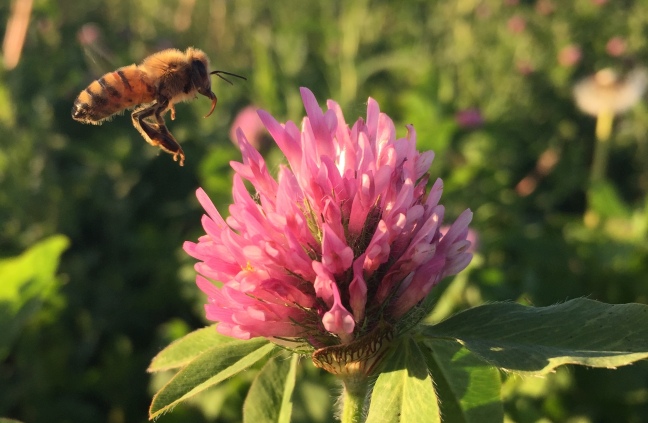 A bee approaches a clover plant. ISU scientists are studying if placing honey bee hives near prairie will help them keep up honey stores later into the winter. Photo courtesy of Amy Toth. Larger image.

The weight reduction coincides with the point in time that most crops and clover in Iowa stop flowering, cutting off forage sources bees need to produce honey. That’s a problem because, as the hives get lighter and the honey scarcer, the likelihood increases that the hive won’t survive the winter, said Matthew O’Neal, an associate professor of entomology at Iowa State University.

A team of ISU researchers recently received a three-year, $1 million grant from the U.S. Department of Agriculture’s National Institute of Food and Agriculture to study whether prairie may offer honey bees a suitable source of forage later into the year. If so, honey producers may gain a new way of safeguarding their hives.

The researchers will examine some important related questions as well, including whether insecticides used for soybean production cause health concerns in honey bees and how the introduction of non-native honey bees to Iowa prairie may affect native bee species. The project also will include input from Iowa beekeepers, soybean farmers and landowners to understand the concerns these key stakeholders have with implementing the results.

The health of pollinating insects has grown as a concern as changes in climate, habitat and the environment have squeezed the populations of numerous species of bees and butterflies. Those declines could lead to further difficulty for many fruits, vegetables and other plants that rely on insects to pollinate and reproduce. The White House formed a Pollinator Partnership Action Plan in 2016, which helped to secure the grant for the ISU research team.

Since 2014, the ISU team has noted a distinct drop in weight for honey bee hives in the state, nearly all of which begin during the same week of August when many flowering plants begin to fade.

“Honey bee hives in central Iowa gain weight until August, then lose weight through late summer and fall, entering winter without enough honey stores,” said Adam Dolezal, a post-doctoral scientist and member of the research team.  “That’s because the bees run out of flowering plants to collect nectar. After soybean and clover stop flowering, there’s very little in the Iowa landscape that flowers after August.”

But native prairies offer many plants that continue to flower through September, he said. So the ISU researchers will move honey bee hives kept on soybean farms to prairie. Then they’ll monitor how the prairie affects the weight of the hives as well as measurements of individual honey bee health.

Soybeans, unlike corn, produce nectar, which can attract between 40 and 50 different bee species in Iowa. That creates the potential for a host of interactions for scientists to untangle. Honey bees are not native to North America, so the research team will study how introducing them to prairie affects native bee species. For instance, honey bees may carry viruses or other pathogens to which native bees haven’t been exposed.

Amy Toth, an associate professor of ecology, evolution and organismal biology, and Dolezal conducted research suggesting many viruses that threaten one bee species are often harmless to other species. The current project will delve further into this question to determine if honey bees put native bees at risk for infections.

The ISU researchers will seek input from soybean producers, landowners and beekeepers throughout the project. Erin Hodgson, an associate professor of entomology, will lead the outreach effort to get reactions from stakeholders as the research progresses.

Beekeepers, for instance, emphasize clover as a primary source of forage for honey bees, and few of them likely have considered prairie flowers as a substitute. The research team will also account for the input of soybean farmers as they explore different pest management strategies.

The researchers want the project to benefit Iowa’s soybean farmers and apiarists. For soybean growers, that means more profitability and more efficient use of insecticides. For beekeepers, that means hives that tip the scales in the right direction.

Iowa State University researchers are studying how prairie may help honey bees build sufficient honey stores to last through lean winters. The research group recently received a $1 million grant from the U.S. Department of Agriculture to further the project.

“Honey bee hives in central Iowa gain weight until August, then lose weight through late summer and fall, entering winter without enough honey stores. That’s because the bees run out of flowering plants to collect nectar. After soybean and clover stop flowering, there’s very little in the Iowa landscape that flowers after August.”