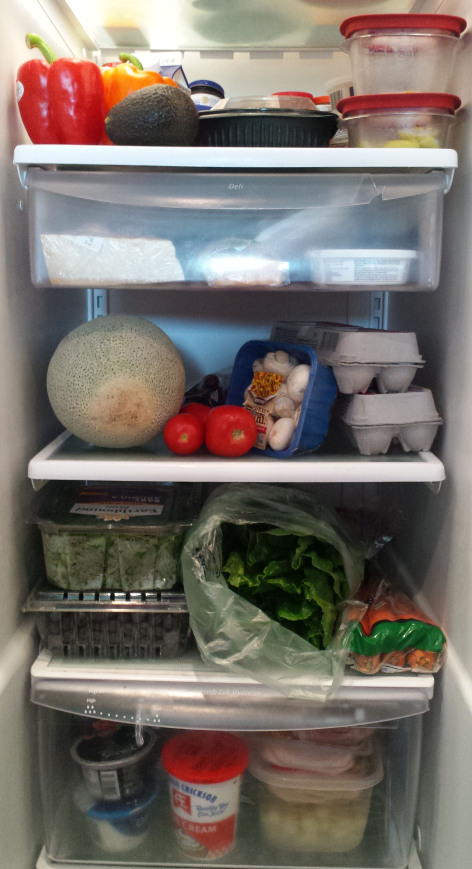 The majority of food that ends up in the landfill comes from our homes.

AMES, Iowa – There is a good chance there are fresh vegetables in your refrigerator that will end up in the garbage instead of on your dinner plate.

Not that anyone goes to the grocery store with the intention of later throwing the food in the trash, but we all do it more often than we probably realize. Ruth Litchfield, a professor of food science and human nutrition at Iowa State University, says we waste about 20 pounds of food each month. And that is per person.

“It’s a huge problem,” Litchfield said. “When you think that 40 percent of the food produced in the U.S. goes to waste, that is just irresponsible.”

There are several reasons why so much of our food ends up in the trash and eventually a landfill, which all relate to our mentality about food. Litchfield says we need to move past the idea that more is better. Whether it’s purchasing more than what we need at the grocery store or consuming large portions at a restaurant, our habits feed our tendency to waste.

According to a 2012 Business for Social Responsibility study on food waste, 44 percent of food going into the landfill comes from the home, followed by 33 percent from the food service industry. To do its part, the food service industry is employing a variety of initiatives, said Susan Arendt, a professor of hospitality management at Iowa State. Donating food to shelters or soup kitchens, incorporating leftover foods into other menu items – for example, using unserved green beans for vegetable soup the next day – and collaborating with farmers to feed unused food to farm animals are just a few examples.

“Some restaurants are also training servers to ask customers what they don’t want with their meal. For example, instead of bringing both butter and oil with bread, they’re asking the customer which one they prefer, rather than letting one go unused and have to be thrown out,” Arendt said.

How to limit your waste

Consumers can take similar steps at home to limit waste and ultimately save money, Litchfield said. She recommends:

Finding ways to make an impact

When discussing food waste in class, Arendt breaks it into two categories for students. There is product waste, such as eggshells or coffee grounds, and service waste or food that is served and not eaten. She says product waste is often unavoidable, although some items are good for compost, while with service waste there are several opportunities to make an impact.

For example, Arendt and a colleague conducted a milk waste study in elementary schools. By implementing simple changes, schools reduced the amount of milk waste. One school noticed students were throwing away unopened cartons of milk, and created a “share table” for students to leave unopened milk for other students to drink. She said another school limited technology in the lunchroom so students focused on eating, and not working or playing on their computers.

Portion control is another step the foodservice industry is taking, but health-conscious consumers are more often the motivating factor. Still, this can help with waste.

“Many restaurants are offering a half-portion size and a regular-portion size. Yes, customers want to receive ‘value,’ but it also depends on the type of customer,” Arendt said. “Customers who are more health conscious are open to smaller portion sizes.”

In 2015, the U.S. Department of Agriculture set a national goal to reduce food loss and waste by 50 percent by 2030. Litchfield is doubtful that many consumers are aware of this goal or are making an effort to do their part. She says it is going to take policy, similar to seatbelt laws or tobacco taxes, to motivate people to make change.

“If you look at when people really started using seatbelts, it was when there was potential for a fine,” Litchfield said. “In some communities you are charged for garbage service based on pounds or number of cans. If you were charged based on the amount of food waste leaving the home, it might change habits.”

Another contributing factor is the cost of food. Litchfield is not advocating for higher prices at the grocery store, but she says food in the U.S. is cheap compared to other countries. If it were more expensive people would be less likely to overconsume, and be smarter about their purchases so food is not going to waste.

Did you know you throw out about 20 pounds of food every month? Nearly 40 percent of the food produced in the U.S. goes to waste. Iowa State University experts have tips for reducing waste at home, and look at how the food service industry is working to do the same.

“It’s a huge problem. When you think that 40 percent of the food produced in the U.S. goes to waste, that is just irresponsible.”

“Some restaurants are also training servers to ask customers what they don’t want with their meal. For example, instead of bringing both butter and oil with bread, they’re asking the customer which one they prefer, rather than letting one go unused and have to be thrown out.”

Reducing food waste is a top priority for ISU Dining and composting is a large part of that effort. This past academic year, 282 tons of food waste from residential dining centers and the commissary kitchen was diverted to the ISU composting facility. This is down from previous years (2016: 292 tons; 2015: 340 tons) and may indicate that efforts encouraging students to take only what they plan to eat are making a difference.

ISU Dining also donates prepackaged food items – sandwiches, fruit cups, desserts – from its campus cafes to Food at First. Volunteers pick up the leftover items to serve with Food at First’s free evening meals or give away at the perishable food pantry.