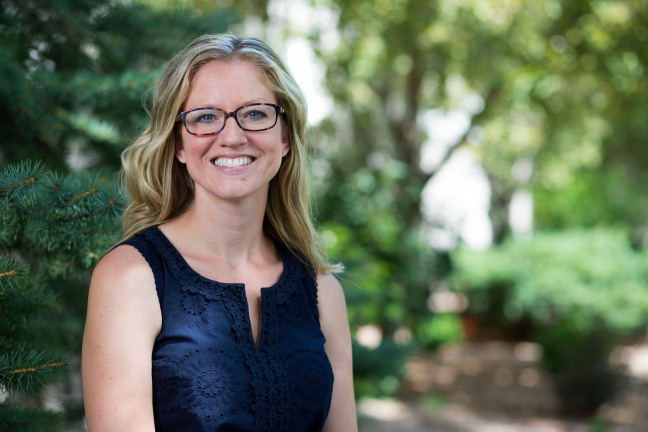 Amie Zarling developed a new intervention for domestic abuse offenders. She's encouraged by the results of a new study, which shows a reduction in recidivism. (Larger image) Photo by Christopher Gannon

AMES, Iowa – Most states mandate that domestic violence offenders complete some type of batterer intervention program, but the success rates are often quite low. That is why the results of a new method developed by an Iowa State University professor are so promising.

Amie Zarling, a clinical psychologist and an assistant professor of human development and family studies at Iowa State, partnered with the Iowa Department of Corrections (DOC) to pilot her Achieving Change Through Values-Based Behavior program, or ACTV (pronounced active).

Now a three-year study comparing offenders who completed ACTV with offenders in an existing DOC program showed significantly fewer ACTV offenders – a nearly 50 percent difference – reoffended and were charged in the year after treatment. The results are published online by the journal Psychology of Violence.

For the study, Zarling and her colleagues looked at arrest rates for domestic assault and other violent and non-violent criminal charges. They found just 3.6 percent of offenders who completed ACTV were charged with domestic assault, compared with 7 percent of men completing the traditional program. It was a similar split for violent charges – 5.2 percent ACTV versus 10.9 percent traditional.

“We’re encouraged by these initial results,” Zarling said. “This is a difficult population to treat. We know that existing interventions have little impact on violent behavior. The men often have little motivation to change when they start treatment, and many have a history of trauma, which complicates treatment.”

The study utilized DOC records for men enrolled in batterer intervention programs from January 2011 to December 2013. That included 1,353 men in ACTV and 3,707 men assigned to the existing program. Group assignments were not randomized, but followed DOC procedures for group selection based on scheduling and availability.

No one likes being told what to do and the men in batterer programs are no different. That’s why Zarling put a strong emphasis on equalizing the relationship between program facilitators and participants by creating a non-judgmental and collaborative environment. She says ACTV works with offenders to identify what they value in life – often their children – and use their own experience as a guide to making better choices and building a healthier relationship with their partner.

“We help offenders see they have a choice. If they choose not to come to treatment, they’re choosing to go to jail. They rarely choose jail and there’s a reason why. The reason is they value other things and so we try to harness that as motivation,” Zarling said. “ACTV makes the participant an expert in their own life. It teaches them to solve their problems on their own as opposed to lecturing and advice giving.”

Zarling was a graduate student when she created ACTV with her then-major professor at the University of Iowa. Many of the differences between ACTV and the previous DOC program based on the Duluth Model, which emphasizes changing thoughts to change behavior, may seem subtle, but in practice are quite dramatic, Zarling said. The Duluth Model is based on the assumption that men’s violence against women is caused by sexist beliefs and the desire to have power and control over women. Zarling says ACTV takes a broader view on the causes of violence. Instead of teaching anger control or suppression techniques to fight against emotion, ACTV focuses on mindfulness and acceptance to make long-term, fundamental changes.

“Quick fixes are what got these men here in the first place,” Zarling said. “ACTV is more about planting the seed and letting men develop the skills over time. That may take the full six months of the program or even longer.”

The Iowa Department of Corrections offers the 24-week ACTV program statewide, said Anne Brown, coordinator of domestic abuse programs. Brown says they are very pleased with the reduction in recidivism rates, as well as the response from facilitators and offenders.

“Facilitators have embraced the change in the treatment approach,” Brown said. “Offenders are much more willing to share experiences in group and are able to grasp the concepts and apply them to personal experiences.”

The Department of Corrections is piloting ACTV with female offenders as well, and Zarling is working with other states interested in implementing ACTV. However, she is cautious not to expand too quickly. She says ACTV is still in its infancy, and she wants to dedicate time for group observation and research to continue improving the program.

While encouraged by the results of this study, Zarling points to the number of men who do reoffend, or those who fail to complete the intervention program. She’s driven to make progress in those areas because of the potential consequences.

Meg Berta, a graduate research assistant at Iowa State; and Sarah Bannon, a graduate student at Stony Brook University, contributed to this study.

Most states mandate that domestic violence offenders complete some type of batterer intervention program, but the success rates are often quite low. That is why the results of a new method developed by an Iowa State University professor are so promising.

“ACTV makes the participant an expert in their own life. It teaches them to solve their problems on their own as opposed to lecturing and advice giving.”

Amie Zarling, a clinical psychologist and an assistant professor of human development and family studies

ACTV uses a series of scenarios to help men practice these skills in a controlled environment. One such scenario requires men to hold an ice cube in their hand for as long as possible. Zarling says the purpose is to create a level of discomfort similar to how they feel when arguing with their partner.

Some men will immediately throw the ice away, Zarling said, while others gradually start to recognize how they feel and learn to respond to their emotions differently.

“We even tell the men they may fail at first, but to us that’s still a success because they tried it,” she said. “It’s about the progression of being open to your feelings and not trying to control your emotions and thoughts. All of this is connected to engaging in prosocial behavior and living according to their values.”