AMES, Iowa – Dry weather forces plants to save energy by reducing their growth rate, but it’s not as if a plant can consult a rain gauge or weather report. So how do they know when to ease up on growth?

Yanhai Yin, a professor of genetics, development and cell biology and a Plant Sciences Institute Faculty Scholar, has spent years charting the genetic mechanisms that govern plant stress response and growth to answer that question.

Yin and his colleagues recently published an article in the peer-reviewed academic journal The Plant Cell focusing on WRKYs (pronounced ‘workies’), a family of proteins named for the several critical amino acids of which they’re composed. The new paper shows how WRKYs govern both stress response and growth in plants, making the proteins of particular interest to plant breeders and crop growers eager for varieties that will withstand dry conditions.

“They are important regulators for the balance of drought response and growth,” Yin said. “They are very promising targets for plant breeding.”

The paper describes how researchers in Yin’s lab managed to cross Arabidopsis plants in such a manner as to eliminate, or “knock out,” three different WRKYs genes. The resulting plants showed dramatically less growth than normal but were more drought tolerant. Arabidopsis is a small flowering plant often used as a model in experiments.

Jiani Chen and Trevor Nolan, graduate assistants in Yin’s lab, contributed to the paper, as well as Mingcai Zhang and Zhaohu Li of China Agricultural University, who are long-time collaborators with Yin.

Much of Yin’s research has centered on a plant protein known as BES1, an important switch in plant genomes regulated by a plant steroid called brassinosteroid that influences thousands of other genes. Yin said WRKYs and BES1 work together to promote plant growth under normal conditions.

Previous studies have shown that WRKYs also help to govern bacterial response in plants as well. Yin said his future studies will tease out how growth, drought tolerance and bacterial response interact with one another. Such efforts could lead to crops with genetics better suited to withstand many of the most pressing challenges producers face.

As the paper hints, harnessing the versatility of WRKYs to breed more resilient crops would make rain gauges look primitive by comparison. 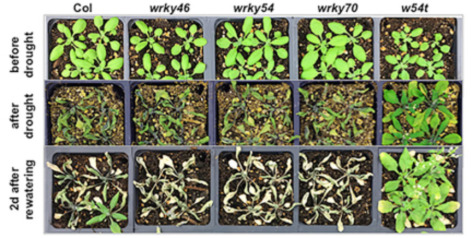 Iowa State University scientists are untangling the complex genetic mechanisms that control growth and stress response in plants. A recently published paper from the researchers identifies a group of proteins that may be of interest to plant breeders eager for crop varieties that will withstand dry conditions.

“They are important regulators for the balance of drought response and growth. They are very promising targets for plant breeding.”