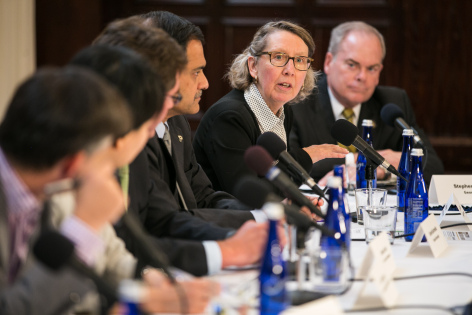 Iowa State University Vice President for Research Sarah Nusser speaks about the critical role research plays in the nation's economy at a roundtable discussion in Washington, D.C., on July 12.

The event, held at the National Press Club, was organized by the Association of American Universities and The Science Coalition. Nusser was among 11 panelists participating in a roundtable discussion about “The State of American Science.” Reporters from more than a dozen media outlets, including Science, Bloomberg, The Washington Post, Inside Higher Education, The Chronicle of Higher Education, Nexstar Media Group and Reuters attended the event.

The group’s extensive conversation covered the value of public-private research partnerships, energy and defense research, artificial intelligence, the outlook for federal research funding, the importance of training scientists and the need for more engagement and communication about science. Panelists underscored the role of university research in addressing some of the world's most pressing problems and fueling the nation's economy.

“It’s critical that we communicate Iowa State University’s deep commitment to pursuing research that advances knowledge and tackles the complex problems we’re facing today in Iowa and globally," Nusser said. "Research is the foundation to educating our next generation workforce and translating new discoveries for the benefit of Iowa’s citizens, communities and businesses.”