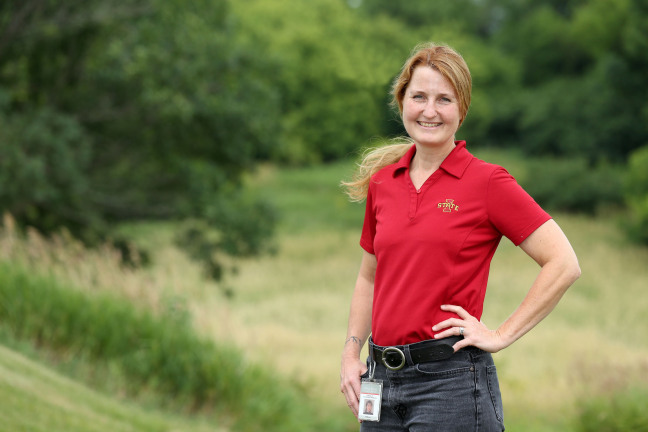 AMES, Iowa – Gauging an animal’s welfare poses a number of problems, not the least of which is the fact that chickens, goats and dogs can’t tell you how they’re feeling. But applied ethologists like Iowa State’s Suzanne Millman are applying rigorous scientific methods to animal welfare issues to find more precise measures of animal contentment.

“Food-animal agriculture has seen some major changes in recent years regarding animal welfare,” she said. “I try to make sure veterinarians are part of that conversation as systems change. It’s not about being abolitionist or ending food-animal agriculture. It’s about finding new ways forward.”

As more consumers take an interest in how their food reaches their tables, Millman, a professor in the department of veterinary diagnostic and production animal medicine as well as the biomedical sciences department, has helped to usher the ISU College of Veterinary Medicine to the forefront of animal welfare research.

What is animal welfare?

The full scope of animal welfare encompasses more than simply keeping animals as pain-free as possible, Millman said. It also includes minimizing fear and distress and accounts for how an animal has evolved to live.

“We want to understand what an animal wants and needs beyond health,” she said. “Does it feel well? What has the animal evolved to do?”

Millman grew up in Canada and aspired to be a dairy farmer as a child, but she wrestled with ethical concerns regarding animal treatment, particularly end-of-life issues. She studied animal and poultry science at the University of Guelph in Ontario, focusing on applied ethology, a scientific discipline that focuses on animal behavior.

While earning a Ph.D. at Guelph, she led an effort to study rooster courtship behavior after the broiler-breeder chicken industry experienced problems with roosters attacking hens, sometimes leading to a significant drop in fertility and production.

Millman found that chicken lines bred for egg production didn’t show similar behavior, leading her to suspect the problem resulted from genetics or feeding practices peculiar to broiler-breeder chicken production. She helped the industry breed roosters that were less likely to exhibit violent behavior, safeguarding the welfare of the animals while helping producers keep their operations running efficiently.

Millman came to Iowa State in 2008. Her appointment includes research, teaching and professional practice responsibilities, all with a focus on animal welfare. She said few veterinary schools have faculty devoted to welfare, which is more commonly associated with animal science departments. But at Iowa State, every first-year veterinary student must take a course in animal welfare, and the college offers students a two-week rotation centered on animal welfare that takes participants to agricultural operations, animal shelters and zoos.

“Animal welfare has a long history as a specialty in animal science, but putting it in a veterinary school is relatively new,” she said.

Much of Millman’s research involves studying animal behavior for signs of distress. Often, this means noting sometimes slight behavioral changes such as pupil dilation or changes in breathing or eating habits.

In some instances, Millman said she draws on human medicine in cases when a patient can’t communicate verbally, as with infants or adults suffering from dementia.

“From there, you can make assumptions about well-being based on behavior and physical signs,” she said.

Millman helped the state establish the Iowa Farm Animal Care Help Line, a first-of-its-kind resource to help Iowans navigate animal welfare issues. The call line, at 1-800-252-0577 or iowafarmanimalcare.org, provides an avenue for Iowans to get answers from veterinarians and other experts.  The collaborative project has received support from the Iowa Pork Producers Association, Iowa Farm Bureau and the Iowa Department of Agriculture and Land Stewardship.

Millman said animal welfare has grown as a concern among consumers in recent years, and she said it’s important for veterinarians to play a role in developing welfare practices.

“Younger generations want to be more informed about the ethics of what they eat and how their food is produced,” she said. “Customers more and more like to know that someone is watching the henhouse and looking out for the welfare of food animals.”