AMES, Iowa – Monarch butterfly populations have taken a nosedive over the last 20 years, according to researchers who monitor the number of butterflies that spend the winter in Mexico every year. But organizations of citizen scientists in the United States who conduct yearly censuses of monarchs in state parks and other locations in the summer have reported no consistent dip in the number of butterflies they see.

This discrepancy has led some to challenge the widely accepted belief that loss of milkweed on the U.S. landscape has driven the decline of the species. However, an ISU researcher and colleagues have found an explanation for the difference between the overwintering numbers and the summer census findings. And their explanation, published recently in the academic journal PLOS ONE, bolsters the view that loss of milkweed, the only plant on which monarchs will lay eggs, has forced monarch populations to fall.

John Pleasants, an adjunct assistant professor in the Department Ecology, Evolution and Organismal Biology, said long-term monitoring of butterflies and eggs on milkweed stems during the summer breeding season across the United States didn’t note the same decline as that documented in central Mexico, where all monarch butterflies migrate for the winter.

“These census findings, which didn’t see the same drop in population, cast doubt on the milkweed narrative,” Pleasants said. “It made people think maybe the problem isn’t with milkweed becoming harder to find.  Instead, maybe there’s something going wrong as the monarchs migrate to Mexico.”

Pleasants set out to pinpoint the reason for the discrepancy and found that it results from the fact that monarch activity has shifted out of agricultural fields, where milkweeds were once common. For example, roughly half of farm fields in Iowa used to have patches of milkweed, but the widespread use of the herbicide glyphosate has kept fields free of milkweed in recent years. That leaves monarchs with no choice but to concentrate in other areas with milkweed, Pleasants said. It is these other areas where summer censuses are conducted.

“The census takers used to see only a small sliver of the total population,” he said. “Now, they’re seeing a higher proportion since the monarchs aren’t spending time in agricultural fields anymore.”

“Then we see with these corrected numbers that, yes, the population of monarchs in the United States is declining at the same rate as the overwintering population,” Pleasants said.

The finding supports previous studies suggesting that an increase in available milkweed could help the monarch population rebound. Such studies have led to efforts across the country to restore monarch habitat. For instance, the Iowa Monarch Conservation Consortium, established through the efforts of the ISU College of Agriculture and Life Sciences, the Iowa Department of Agriculture and Land Stewardship and the Iowa Department of Natural Resources, has taken a science-based approach to enhancing monarch butterfly reproduction and assisting community-led milkweed restoration efforts.

Pleasants called monarch butterflies an “iconic species,” with which virtually all Iowans are familiar. He said the monarch butterfly’s distinct appearance and lifecycle, plus its unique migratory behavior, inspire people to undertake conservation efforts to reverse its decline.

“It’s a fascinating and awe-inspiring bit of biology,” he said. 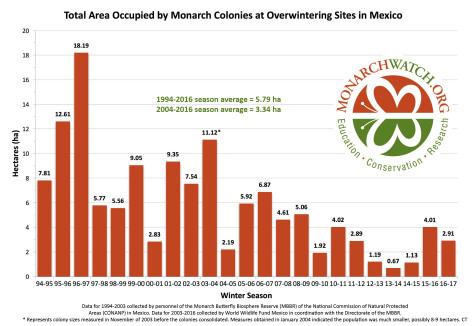 The graph notes the dramatic decrease in population of overwintering monarch butterflies in Mexico in recent years. ISU research provides an explanation for why censuses of monarchs in the U.S. didn't always note similar population decreases. Image courtesy of Monarch Watch. Larger image.