Detecting a concealed weapon or threat is not easy, even for experienced police officers 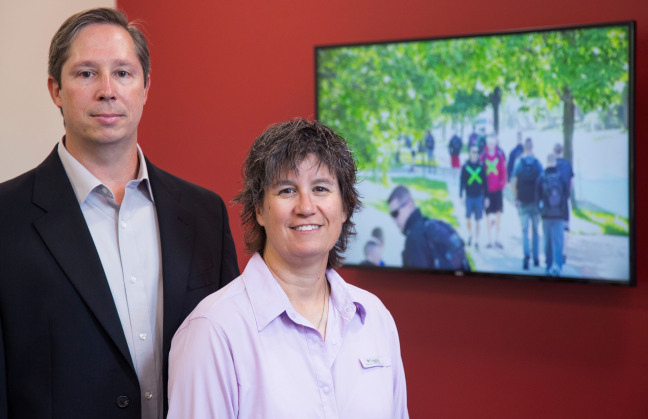 The video on the monitor is one that Christian Meissner (left) and Dawn Sweet (right) created to test how well police officers can detect if someone is concealing a weapon. (Larger image) Photo by Christopher Gannon

However, the likelihood of a police officer identifying someone concealing a gun or bomb is only slightly better than chance, according to new research from Iowa State University. The results, published in the journal Law and Human Behavior, found officers with more experience were even less accurate. Dawn Sweet, an adjunct assistant professor of communication studies and psychology, says the findings do not point to weaknesses in the officers’ abilities, but rather highlights the need for better research and training.

“We expect police officers to do something that is very difficult and challenging without giving them the tools they need to do the job,” Sweet said. “The training officers receive is not research based, but based on anecdotes and cues that we don’t know to be reliable. There needs to be evidence these cues work, and we lack that evidence.”

That is why Sweet and Christian Meissner, a professor of psychology, designed the first experimental study (explained below) of threat detection. By replicating how people behave when concealing a weapon or other item, researchers assessed detection accuracy and recorded behavioral cues that study participants used to make their decisions. The work is ongoing with the goal of developing a standardized approach to evaluating behaviors that predict if someone is concealing a weapon or dangerous device, and therein poses a threat.

Our body will betray us

It is clear to Sweet and Meissner that existing threat detection techniques are not working. They point to a recent report from the U.S. Government Accountability Office that found indicators the Transportation Security Administration is using are ineffective at detecting airport security threats.

ISU researchers say there is no definitive cue of concealment, and several variables can complicate the issue. Context is important because behaviors vary depending on the situation. For example, a person trying to sneak a can of beer into a football game will act differently than a person carrying a bomb in a backpack. Meissner, who studies interrogation techniques, says officers cannot solely rely on behavioral cues.

“We want investigators to identify those aberrant behaviors with the understanding that such behaviors may not automatically signal a threat. Using strategic interview techniques, the officer can engage the person to better understand the situation,” Meissner said. “In many situations, simple elicitation would lead the officer or investigator to understand the root cause of the unusual behavior or anxiety.”

Researchers know there is a link between nonverbal behaviors and cognitive function, and that our bodies give off subconscious signals when we are trying to conceal something. For example, if a man denies having a gun when asked by a police officer, his hand might touch or his eyes might look at the part his body where he is concealing the weapon, said Sweet, whose work focuses on nonverbal communication.

“We don’t know that looking or touching are accurate, reliable predictors, but they’re ways our body may relieve the stress and tension of suppressing thoughts about what we’re trying to conceal,” Sweet said. “Because of our body’s inability to conceal truth for long periods of time, it’s going to leak out. Our body is an extraordinarily leaky communication channel.”

Through their ongoing work, researchers want to determine if there are other ways to trigger those signals. For example, a woman trying to get a gun inside a courthouse will anticipate interactions or things that may happen as she goes through security, they said. But what happens if her routine is interrupted?

“If someone is concealing something and you throw them off script, you may be able to induce what we call cognitive load – you burden them psychologically or cognitively,” Meissner said. “Then the question is, will we see more diagnostic cues – either behavioral or verbal – when someone engages them?”

Is he carrying a gun?

For this study, Sweet and Meissner recorded videos of three different scenarios to replicate behavior when a person is hiding a gun or an unstable device in a backpack. The researchers recruited police officers and college students to participate in the study for comparison. In all three scenarios, officers had a similar accuracy rate as the students.

The first experiment used videos of a man walking into a courthouse. Study participants had to determine if the man had a gun. They were also asked to list indicators about the man’s behavior used to make their decision. Overall, both groups performed greater than chance. However, participants had higher accuracy identifying when the man did not have a gun. The rate of accuracy was much lower when the man was concealing.

For the second experiment, participants watched several videos of three men walking through a crowd and were asked to decide if one of the men was concealing a device in his backpack. Again, overall accuracy in determining threat was greater than chance. In 73 percent of the trials, participants correctly identified whether the group had a concealed object. However, when it came to identifying the person concealing the object, accuracy dropped to 44 percent.

In the final experiment, researchers told participants that one of the two men walking through a crowd was concealing a device. Their task was to determine which one. While overall results were the same, researchers did notice a difference based on officer experience. Less experienced officers were more accurate. Researchers attribute the difference to officer bias based on their job-related knowledge and encounters.

Dominick Atkinson, a graduate research assistant in psychology, contributed to the study. Complete details of each experiment are outlined in the journal article.

Terrorist attacks and bombings at concerts, sporting events and airports underscore the need for accurate and reliable threat detection. However, the likelihood of a police officer identifying someone concealing a gun or bomb is only slightly better than chance, according to new research from Iowa State University.

“We expect police officers to do something that is very difficult and challenging without giving them the tools they need to do the job. The training officers receive is not research based, but based on anecdotes and cues that we don’t know to be reliable. There needs to be evidence these cues work, and we lack that evidence.”