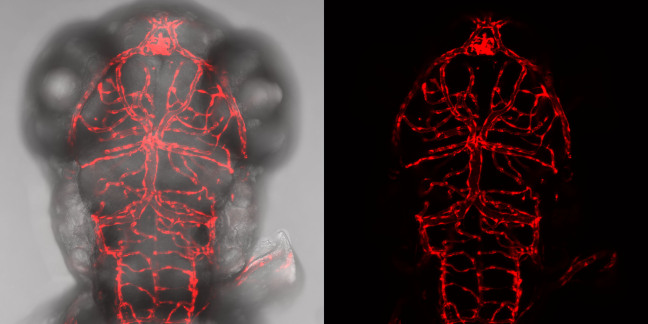 Researchers can activate fluorescent genes in zebrafish to cause certain tissues to glow, an indication their gene editing techniques are working as planned. ISU scientists hope to find genes in zebrafish that can lead to new treatments for diseases in humans. Image courtesy of Wesley Wierson. Larger image.

Ames, Iowa – Iowa State University researchers have received a grant to further develop innovative technology that allows them to scour the genome of zebrafish for genes that might lead to advances in human health.

The researchers will use the latest gene editing techniques to create precise mutations in zebrafish. The project, supported by a four-year, $2.98 million grant from the National Institutes of Health, aims to identify genes connected to some of the most serious ailments humans and animals face, including cancer, vascular disease and neurological disorders.

By identifying particular genes related to disease and then switching them off and on again, the researchers hope their findings could lead to new treatments for various diseases.

“We need to determine if a gene is curative,” said Jeff Essner, a professor of genetics, development and cell biology and research team member. “We’re hoping to develop a toolbox that will allow us to identify genes in zebrafish, and ultimately in humans, that can be targeted with therapy to cure various ailments.”

Many of the genes that lead to disease in humans are present in the zebrafish genome as well, said Maura McGrail, an assistant professor of genetics, development and cell biology and a member of the research team.

“If we identify a gene in a zebrafish that affects disease, there’s a good chance those results carry over to humans and agriculturally important animals as well,” McGrail said. “The genomes are about the same size and complexity. There are differences, but it’s a great starting point.”

The Essner and McGrail laboratories boast scores of tanks that contain zebrafish, a small freshwater species that grow only a few centimeters in length. Zebrafish make good model organisms for this kind of genetics work because their embryos are fertilized outside the body of the mother and are transparent, making them easy for scientists to collect and target with the gene-editing technology.

The researchers can even activate fluorescent genes in the zebrafish to cause certain tissues to glow. Essner said doing so offers a direct way to confirm the gene-editing technology is working as intended. It also makes for a striking image.

The ISU team also includes Drena Dobbs, a University Professor of genetics, development and cell biology. The team will collaborate with Karl Clark and Stephen Ekker at the Mayo Clinic in Rochester, Minnesota, who are conducting similar gene editing research in cultured human cells.

A research team at Iowa State hopes advanced gene editing techniques will help them locate genes in zebrafish that may allow for the development of new treatments for disease in humans. The research is supported by a nearly $3 million grant from the National Institutes of Health.

“We need to determine if a gene is curative. We’re hoping to develop a toolbox that will allow us to identify genes in zebrafish, and ultimately in humans, that can be targeted with therapy to cure various ailments.”