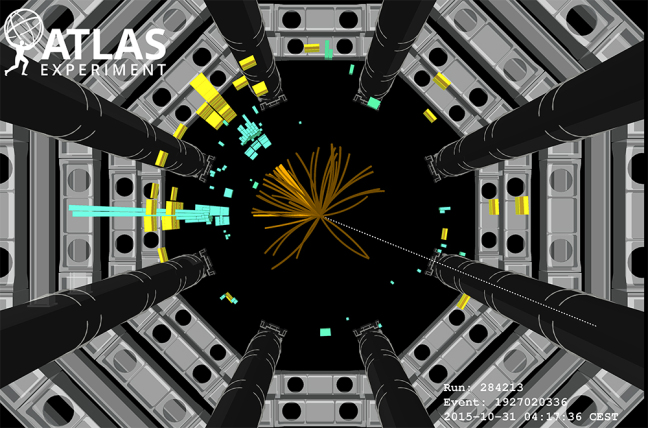 AMES, Iowa – It’s supposed to happen most of the time a Higgs boson shows up in the Large Hadron Collider. But, even with their huge and high-tech particle detectors, physicists around the world hadn’t been able to see the Higgs decaying into two bottom quarks.

The Standard Model of particle physics predicts that when the proton-proton collisions at the collider produce Higgs bosons, 58 percent of the time those bosons would ultimately decay into a pair of bottom quarks. (The various quarks are the matter particles that make up the protons and neutrons inside the nuclei of atoms. Physicists believe the Higgs is associated with the field that gives elementary particles such as quarks their masses.)

But, inside the 17-miles-around collider near Geneva, Switzerland, collisions of protons racing at nearly the speed of light and at unprecedented energies produce billions of pairs of bottom quarks that have nothing to do with the Higgs.

And so, ever since the Higgs was discovered in 2012 – observed as it decayed into pairs of photons, tau-leptons, and W and Z bosons – physicists have been working to find a way to separate the Higgs-related bottom quarks from all the others.

Iowa State University physicists have been part of that international effort.

“The problem is, you can’t build a Higgs on demand,” said Soeren Prell, an Iowa State professor of physics and astronomy and a member of the Iowa State research team working on the ATLAS Experiment at the collider. “We smash protons together and very few times will we get a Higgs.”

Carlos Vergel Infante, an Iowa State doctoral student, helped explore new ideas for trigger technology that identifies and saves the Higgs-related data. Jie Yu, a postdoctoral research associate, helped do the statistical analysis that confirmed physicists have enough data to say they have evidence of the Higgs decaying into bottom quarks. They’ll need more evidence to statistically claim an observation and discovery.

A paper describing the evidence so far has been written by the ATLAS collaboration and submitted for review and publication.

What’s the significance of finally establishing evidence of the Higgs decaying to bottom quarks?

“We’re starting to learn more about the Higgs,” Prell said. “This would establish that the Higgs decays to quarks and gives mass to quarks. This is really the first hard evidence that this is indeed the case.”

There could be even more to learn about the Higgs, said Chunhui Chen, an Iowa State associate professor of physics and astronomy and another member of the ATLAS team.

“A lot of interesting observations can come from studying the Higgs boson,” Chen said. “For example, could there be a direct connection between the Higgs boson and dark matter or dark energy?”

Dark matter and dark energy are physics mysteries that have never been directly observed. Dark matter adds missing heft to the universe and helps explain galaxy clusters and light-bending gravitational pulls. Dark energy is thought to permeate space and accelerate the expansion of the universe.

Studies of the Higgs decay aren’t the only contributions Iowa State physicists are currently making to the ATLAS Experiment.

Jim Cochran, an Iowa State professor of physics and astronomy who helps manage United States operations for ATLAS, said Iowa State physicists are working with researchers from about 100 institutions to develop a new, upgraded Inner Detector for the experiment.

The Inner Detector is the inside layer of the multi-layer detector. It’s just outside the beam pipes that contain colliding protons and sometimes colliding lead ions. It’s like a powerful digital camera that records the subatomic particles flying from the collisions. And it has to be built to withstand heavy loads of radiation.

Cochran said Iowa State physicists are developing assembly-line and quality-control techniques for the production of supports that will hold and cool sensors and electronics for the central part of the Inner Detector. Physicists at Yale University and in the United Kingdom will produce 400 of the supports. Installation of the new Inner Detector containing all those supports is likely in the mid-2020s.

Analysis of the Higgs data and development of updated detector technology puts Iowa State physicists and students in the middle of the discoveries at the Large Hadron Collider.

“We know so little about the Higgs at this point,” Prell said. “There can be surprises and evidence for new physics. That would be exciting.”

Iowa State University physicists have been part of an international search for evidence that the Higgs boson, as predicted, most often decays into two bottom quarks. That search has been a challenge -- billions of bottom quarks are produced inside the Large Hadron Collider and most have nothing to do with the Higgs boson. But physicists believe they finally have evidence of the hard-to-find decay.

“We know so little about the Higgs at this point. There can be surprises and evidence for new physics. That would be exciting.”

Soeren Prell, an Iowa State professor of physics and astronomy