High-skilled workers leaving Iowa because of lack of jobs 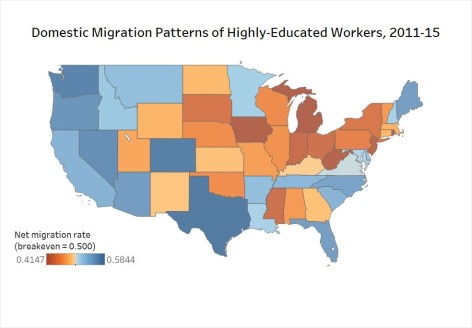 This map illustrates the flow of workers with a four-year or other advanced degree. Orange states indicate a loss of workers and blue represent gains. (Larger image) Image courtesy Liesl Eathington

AMES, Iowa – A shortage of high-skilled jobs is a primary factor driving Iowa’s brain drain, according to a new analysis by Iowa State University researchers.

The report measured Iowa’s competitiveness in attracting and retaining highly skilled, educated workers as compared to the rest of the country. Dave Swenson, an associate scientist of economics; and Liesl Eathington, an assistant scientist of economics, found overall the state gains more workers than it loses, but the breakdown by skill level is most telling.

Iowa’s greatest gain between 2011 and 2015 was workers under age 44 with only a high school diploma, and its greatest loss was among workers with a four-year or greater degree. Swenson says the data clearly show Iowa produces more educated employees than its economy can utilize. While Iowa has a strong advantage in banking and finance, it has fewer jobs that require a college degree as compared to the national average, he said.

“We have two problems,” Swenson said. “One, our economy still has a strong manufacturing and agricultural base and cannot use all these workers. Two, our economy is not going to rapidly transition into that new phase; it is moving very slowly toward the national average.”

Swenson and Eathington analyzed occupation and employment data from the Bureau of Labor Statistics, Census Bureau and the Department of Labor. They created three categories of skills – critical basic, problem solving and high level technical – that best match the requirements of high-skill occupations and cut across all divisions of Iowa’s workforce. In all three categories, Iowa and several other Midwest states are losing workers.

This analysis builds upon previous research, in which Swenson and Eathington found no evidence of a worker shortage in Iowa, particularly with middle-skilled workers. For businesses experiencing a worker shortage, researchers point to pay and location – generally small, rural communities – as contributing factors. Bottom line, they say an absence of skilled workers is not stalling growth.

If projections hold true, Iowa’s economy will add the jobs necessary to keep more of its highly educated workers. Over the past 30 years, that has happened, but the shift will continue to be a slow process, Swenson said. This raises the question about potential interventions that might help accelerate the shift. While the analysis did not look at public policy solutions, Eathington says there are limited options.

“One possibility would be to support more programs such as CIRAS (Center for Industrial Research and Service) that work directly with companies in adopting new technologies that demand these types of higher-skilled jobs,” Eathington said.

Iowa is not alone in its struggle to retain high-skilled workers. Many states, much like Iowa, that experienced growth in the overall workforce, saw an outflow of workers in occupations scoring high in critical basic (critical thinking, math, science), problem solving (judgment and decision making, systems analysis, systems evaluation) and high level tech (operations analysis, programming, quality control analysis) skills. California stood out as an exception. Overall, it lost workers, but made gains in all three high-skill categories.

Occupational projections from 2014 to 2024 for the three skill categories show the contrast between Iowa’s outlook and the national forecast:

Percentage of forecasted growth for occupations with high skills scores*

*Occupations may be included in more than one of the three listed skill categories, so percentage values are not additive.

Though Iowa is lower than the nation in all three categories, the state's growth rate in higher-skilled occupations through 2024 is projected to outpace growth in occupations that demand middle-to-upper middle skills.

A shortage of high-skilled jobs is a primary factor driving Iowa’s brain drain, according to a new analysis by Iowa State University researchers. The report measured Iowa’s competitiveness in attracting and retaining highly skilled, educated workers as compared to the rest of the country.