80th anniversary of massacre time for remembrance and recognition of solidarity 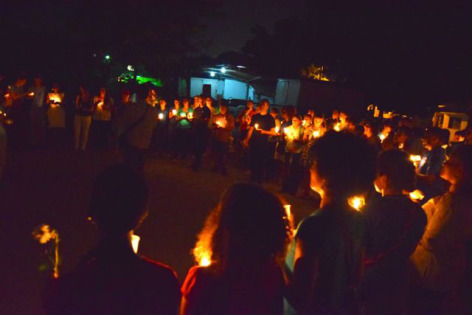 AMES, Iowa – Megan Jeanette Myers understands the tension that still exists along the Dominican-Haitian border 80 years after the 1937 Haitian Massacre. The Iowa State University assistant professor of Spanish and Latinx studies spends her summers working in the Dominican Republic, where she lived for a year, and has traveled throughout Haiti.

It is because of this experience that Myers is discouraged when the tension between the two countries overshadows efforts to move forward. October marks the 80th anniversary of the massacre, also known as the “Parsley Massacre,” which killed an estimated 20,000 Haitians and Dominicans of Haitian descent living in the Dominican Republic. Myers is a co-founder of Border of Lights, an organization that provides support to border communities and commemorates the lives lost in the massacre.

“Remembering the massacre is a way to not only pay tribute to lives lost – both Dominican and Haitian – but also to consciously think about the complicated historical dialogue between the two countries and the plethora of narratives that exist in relation to this event,” Myers said.

Some of those narratives tend to distort the progress made, she said. Through her work with Border of Lights and in the classroom, Myers tries to emphasize the solidarity and interdependence that she has witnessed. The 2010 earthquake that hit Haiti is a good example, she said.

In the days following the magnitude 7 quake, first responders from the Dominican Republic assisted with rescue efforts and opened hospitals along the border to care for injured Haitians. However, a cholera outbreak 10 months after the earthquake prompted the Dominican Republic to close the border to prevent the spread of illness. That decision later became the focus of media coverage, and this metaphor of closed borders tends to dominate discussions of Haitian-Dominican relations, Myers said.

Still work to be done 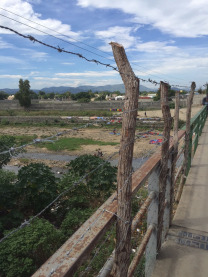 The view from walking over the border bridge between Dajabón and Ouanaminthe. Photo courtesy of Megan Myers

While the border is permeable, in larger border communities such as Dajabón (in the north) and Pedernales (in the south) of the Dominican Republic, gates separate the two countries. In the province of Dajabón, Haitians and Dominicans freely travel across the border twice a week when the gates open for a market area and trade zone. At the end of the day, the gates close and people return to their home countries.

Myers says it is a unique situation because the Massacre River, which flows along the border in Dajabón, is flooded with people washing clothes and children playing in the river. She says it is interesting – considering the centuries of shifting border policies – to see how people respect the border gates, when they could easily cross the river to the other side.

Despite some of the physical barriers, there are several examples of how the two cultures have blended – art, food, music, religion – in border communities such as Dajabón. Myers sees these as signs of progress, but knows there is still work to be done. Some of the ongoing tension between the two countries stems from a 2013 Tribunal Court Ruling in the Dominican Republic that stripped the citizenship of thousands of Haitians of Dominican descent.

The ruling forced many Haitians born in the Dominican Republic to return to a country where they had never lived, Myers said. The impact is similar to concerns here in the U.S. about DACA (Deferred Action for Childhood Arrivals). It is impossible to ignore these modern-day challenges and the history between the Dominican Republic and Haiti. However, to continue strengthening the relationship, Myers says it is necessary to shine light on the positives.

“The camaraderie between the two countries is an aspect that is often overlooked in scholarship and in the media,” Myers said. “While there are recent examples of border violence, there are also examples of border solidarity and interdependency. The movement between cross-border communities on market days in Dajabón paints a picture of the vibrant, intercultural communities and challenges the anti-Haitian narratives.”

This will be the first year Myers, who is expecting a baby in October, will not travel to the Dominican-Haiti border for Border of Lights. Instead, she and students in her senior seminar on contemporary Caribbean and diasporic Caribbean literature will participate in a virtual global vigil from 7-9 p.m. on Saturday, Sept. 30. Myers says anyone is welcome to pay tribute on Twitter or Facebook using the hashtag #BOL2017 or #BOL17. During the vigil, several authors, academics and artists will also answer questions about the 1937 massacre and current Dominican-Haitian relations.

Myers says the Border of Lights team is working with directors of the documentary “Hasta la Raíz” (To the Root) to host a screening of the film at Iowa State in the spring. The documentary tells the story of how three Dominican women, all of Haitian descent, confront anti-Haitian immigration policies in the Dominican Republic.

October marks the 80th anniversary of the 1937 Haitian massacre, which killed an estimated 20,000 Haitians and Dominicans of Haitian descent. Megan Jeanette Myers says the anniversary is a time for reflection and recognition. The ISU assistant professor is a co-founder of Border of Lights, an organization that provides support to border communities and commemorates the lives lost in the massacre. 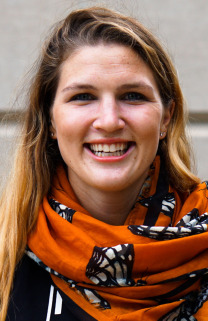 “Remembering the massacre is a way to not only pay tribute to lives lost – both Dominican and Haitian – but also to consciously think about the complicated historical dialogue between the two countries and the plethora of narratives that exist in relation to this event." 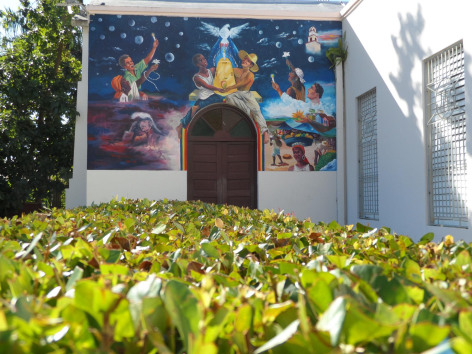 This mural was installed in Dajabón in 2013 as part of the Border of Lights events. Photo courtesy Megan Myers 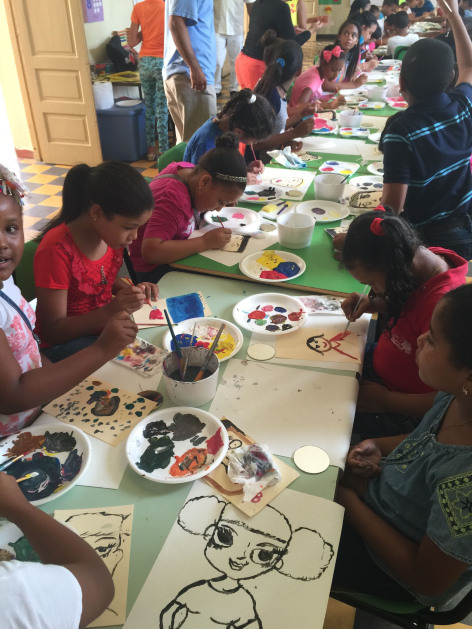