“Betting on Africa to Feed the World” will be at 8 p.m. Monday, Oct. 16, in the Memorial Union Great Hall. A reception and student poster display will precede the lecture at 7 p.m. in the adjoining South Ballroom. Undergraduate and graduate students will present research posters on world food issues. The Norman Borlaug Lecture is held in conjunction with the annual World Prize celebration. It is free and open to the public.

Adesina is president of the African Development Bank. He previously served as Nigeria's minister of agriculture and rural development, the Alliance for a Green Revolution in Africa's (AGRA) vice president and the Rockefeller Foundation's associate director of food security.

As agriculture minister for Nigeria (2010-15), he introduced the E-Wallet system, which broke the back of corrupt elements that had controlled the fertilizer and seed sectors for 40 years. The resulting increase in farm yields led to the improvement of food security for 40 million people in rural farm households. Adesina's policies in Nigeria expanded the country's food production by 21 million metric tons, and the country attracted $5.6 billion in private sector investments in agriculture — earning him the reputation as the "farmer's minister."

As vice president of AGRA, Adesina led a major expansion of commercial bank lending to farmers. He developed critical partnerships with the International Fund for Agricultural Development and others to provide loans to tens of thousands of small farmers and the agribusiness that supports them in Kenya, Tanzania, Uganda, Ghana and Mozambique.

In his role with the Rockefeller Foundation, Adesina organized the 2006 Africa Fertilizer Summit, which Nobel laureate Norman Borlaug hailed as absolutely essential in igniting the campaign to spread a new Green Revolution across Africa.

"An Africa that can feed itself — it's a big vision," Adesina said as he assumed the African Development Bank presidency in 2015. "Ten years is a sufficient amount of time to do that. It will require political will. It will require a lot of resources; a lot of commitment from the private sector. But I think we have set the direction, and we’ve put the stakes in the ground. That one is critical. And I can’t forget what Norman Borlaug used to tell me. ‘Akin, go score some goals for African agriculture.’”

In 2013, Forbes magazine named Adesina African Person of the Year. He earned his bachelor's of agriculture from the University of Ife, Nigeria, and his master's and doctoral degrees in agricultural economics from Purdue University.

The annual Norman Borlaug lecture is named for the Cresco native and agronomist whose discoveries sparked the Green Revolution. Borlaug received the Nobel Peace Prize for his international work in wheat research and production, which has saved millions of lives. He is the founder of the World Food Prize, which annually recognizes the achievements of individuals who have advanced human development by improving the quality, quantity or availability of food in the world.

This lecture is coordinated by Iowa State University's Nutritional Sciences Council and co-sponsored by the Office of the President, Seed Science Center, World Affairs series and the Committee on Lectures, funded by Student Government, as well as the World Food Prize Foundation. 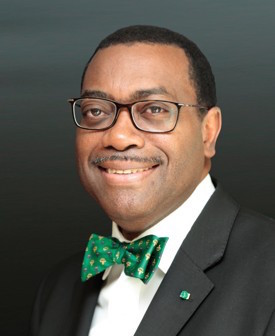 “Betting on Africa to Feed the World”

Reception and student research poster display will precede the lecture at 7 p.m. in the adjoining South Ballroom.