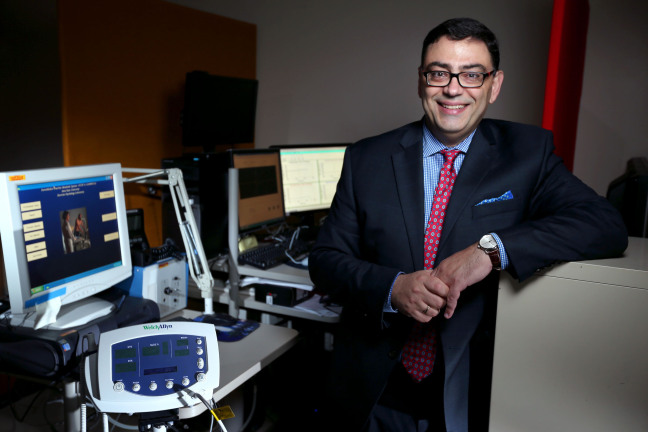 Panteleimon "Paddy" Ekkekakis inside his exercise research lab where he studies how our bodies and brains respond to exercise. (Larger image) Photo by Christopher Gannon

AMES, Iowa – The allure of high-intensity interval training is simple – go all-out for as little as one minute and reap the benefits of a 45 or 60-minute workout. With a promise like that, it is easy to understand why people are willing to try it.

However, Panteleimon “Paddy” Ekkekakis, a professor of kinesiology at Iowa State University, says that promise comes with a catch. Ekkekakis, an expert on exercise psychology, studies how our bodies and brains respond to exercise, more specifically, the pleasure or displeasure we experience when exercising. He says the entire premise of high-intensity training guarantees a level of displeasure.

“If you can take an hour of exercise and squeeze it into one minute, there’s a price to pay,” Ekkekakis said. “The price is 100 percent intensity. It’s undeniable that the experience will be unpleasant.”

As high-intensity interval training, or HIIT, has grown in popularity, so has the debate over whether it is an effective public health solution. Proponents promote HIIT as a way to help inactive people “squeeze in a workout” and boost physical activity, Ekkekakis said. When you consider that lack of time is a top response in public health surveys as to why people do not exercise, HIIT should be a good option. Ekkekakis says it is not that simple.

While lack of time is a popular excuse, it really boils down to behavior and people choosing to spend their free time doing something they enjoy more than exercise. Given that most people do not adhere to a workout philosophy of “no pain, no gain,” condensing the duration will not make a difference, he said. If the goal is to improve public health, Ekkekakis says our mindset must shift from thinking of exercise as another daily task, to making it an enjoyable part of our lifestyle (see sidebar).

“The message of ‘squeezing it in’ perpetuates the idea that exercise is a chore. We want to break down the association of exercise as punishment, as something unpleasant, something to tolerate or a bitter pill you have to swallow,” Ekkekakis said. “For example, instead of viewing a bike ride as exercise, we want people to think of it as a chance to enjoy the outdoors or to spend time with family.” 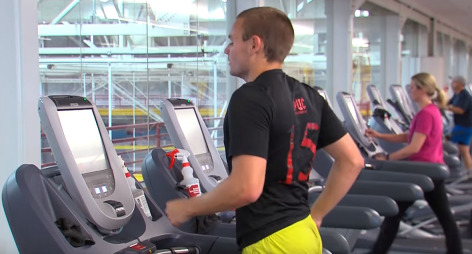 According to the National Health and Nutrition Examination Survey, only 3.2 percent of American adults get a combined 30 minutes of moderate-intensity physical activity at least five days a week. The survey uses accelerometers, rather than self-reports, to more accurately measure activity, Ekkekakis said. A total of 150 minutes a week is the minimum recommended by the World Health Organization.

Helping the remaining 96.8 percent of Americans to reach that minimum is motivation for Ekkekakis. He does not dispute claims that high-intensity exercise accelerates gains. His concern is sustainability as well as risk of injury for that 96.8 percent. Ekkekakis says just the thought of exercising for the recommended 30 to 60 minutes a day is enough to keep some people from even trying. HIIT may be a good fit for some people who are young and healthy, but for the majority of the population it is unpleasant, and therefore, unsustainable, he said.

The results of a recent study published in the journal Psychology of Sport and Exercise support his point. Ekkekakis and his colleague, Emily Decker, measured levels of pleasure and enjoyment during and following two workouts that burned the same number of calories. One workout consisted high-intensity intervals and the other was a longer, moderate-intensity, continuous exercise routine.

“I fear these programs send the wrong public health message. The people who can maintain this type of training are a small minority. Most people are overweight, sedentary and not getting enough activity,” Ekkekakis said. “The only objective that makes sense is to adopt a type and amount of exercise that will help you incorporate exercise into your daily life so you can be active for the rest of your life.”

Contrary to Ekkekakis’ results, some studies have reported more enjoyment from high-intensity workouts than moderate-intensity exercise. Ekkekakis says with any research findings, it is important to understand the study methods and participants. For example, the most widely cited study on high-intensity enjoyment had a sample of eight young, athletic men with cardiorespiratory fitness at about the 95th percentile for their age. The sample provides some context for the findings, which are not applicable to the general population, Ekkekakis said.

For convenience, many exercise scientists recruit study participants from within their department. These samples are more likely to include, athletic, 20-something college students. Ekkekakis says the results will vary for middle-aged or older adults who are struggling with their weight and trying to be more active.

HIIT is still relatively new and research is limited, which is another reason Ekkekakis urges caution when considering claims about outcomes, injury risk and enjoyment.

As high-intensity interval training, or HIIT, has grown in popularity, so has the debate over whether it is an effective public health solution. An Iowa State University professor of kinesiology says the workouts are not sustainable for the majority of people who are trying to lose weight and move more.

“If you can take an hour of exercise and squeeze it into one minute, there’s a price to pay. The price is 100 percent intensity. It’s undeniable that the experience will be unpleasant.”

If you enjoy it, you will do it

It may seem like an oxymoron, but it is possible to enjoy vigorous exercise. How? Start strong and then decrease intensity throughout the workout. Here is what Ekkekakis has learned from his research analyzing two, 15-minute workouts on a recumbent bike:

These research results are published in the April 2016 edition of Journal of Sport & Exercise Psychology.