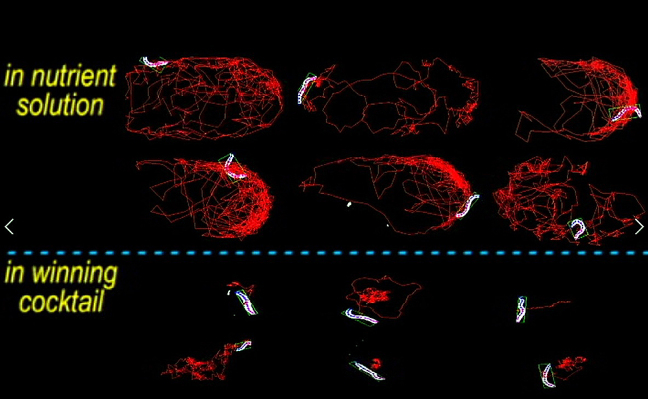 The red lines in these images show the activity of parasitic roundworms, or nematodes. The top images show active roundworms in a nutrient solution. The bottom images show roundworms that have been treated and paralyzed by a cocktail of four drugs. Larger image. Image courtesy of the Santosh Pandey research group.

AMES, Iowa – Laboratory video tells the story: tiny, parasitic worms swimming freely in a nutrient solution are active and mobile; expose the same kind of worms to a mixture of four drugs optimized by an engineering technique and they’re partially paralyzed, struggling in place.

The experiment demonstrates that an engineering technology developed and patented by Chih-Ming Ho of the University of California, Los Angeles – it’s called a feedback system control optimization technique – can quickly identify potent drug combinations that are effective on a small-animal model organism.

The discovery is reported online today, Oct. 4, in the journal Science Advances. The paper’s lead authors are Santosh Pandey, an associate professor of electrical and computer engineering at Iowa State University; and Xianting Ding, a professor with the School of Biomedical Engineering at China’s Shanghai Jiao Tong University. Co-authors are Zach Njus, a former Iowa State graduate student; Taejoon Kong, a current Iowa State graduate student; Wenqiong Su of the Shanghai university; and Ho, a distinguished research professor of mechanical and aerospace engineering at UCLA.

The research was partially supported by grants to Pandey from the National Science Foundation and the Defense Threat Reduction Agency. Chinese grants also partially supported the project. Jo Anne Powell-Coffman, professor and chair of genetics, development and cell biology at Iowa State, provided insights about working with nematodes. Ho’s technique was patented in 2012 as an apparatus and associated methods for manipulating and optimizing biological systems.

The experiment could lead to further work that produces effective treatments for parasitic roundworms, or nematodes, that contribute to disease in people and livestock, Pandey said. The few drugs available to treat the roundworms are losing their effectiveness as the parasites develop multidrug resistance.

In this study, specimens of the Caenorhabditis elegans nematode were placed in microfluidic test chambers and exposed to different combinations of four drugs that paralyze the nematodes – levamisole, pyrantel, methyridine and tribendimidine.

The experiment built on prior work by Pandey’s research group to test the effects of individual drugs on the C. elegans nematode. To measure the effects of the drugs, the lab developed video tracking software that quantifies a worm’s movement in terms of its velocity and curvature. Video for this study captured and tracked the worms’ movements at one frame per second for 10 minutes.

“We wanted to quantify paralysis events in worms using a simple, identifiable set of parameters,” Pandey said. “A worm with the highest curvature and lowest velocity is really struggling and is paralyzed.”

Pandey said a study goal was to find a mixture that reduced drug concentrations while increasing toxicity. That could reduce costs of treating the parasites and fight development of drug resistance.

The experiment worked like this, according to the paper:

In this experiment, a “winning cocktail” was identified after the process was repeated four times for 32 total tests, according to the paper.

Even though the computer system only requires feedback about experimental results – no information about drug pharmacology, animal biology or other characteristics is required – Pandey’s group found it was an effective tool for quickly finding a drug combination that was effective against nematodes.

The test validates use of the feedback system for drug testing on nematodes as a whole organism, according to the paper. Ho has previously shown the feedback system can be used in cell studies, including development of cancer drugs and culture systems to maintain stem cells.

“One is multidrug resistance,” he said. “These parasites are becoming more resistant to the drugs we have been using. Two is the tremendous expense of developing new drugs – it can take more than ten years and it’s very costly.”

Pandey said the experiment suggests further study would be worthwhile.

“A smarter alternative to drug discovery would be coming up with optimized combinations of existing drugs that are more effective and already approved by the Food and Drug Administration,” he said. “An exciting challenge would be to test if this technique works on other model organisms and parasites.”

Iowa State University's Santosh Pandey helped lead a project that demonstrates an engineering technology used in cell studies can also be used for drug testing on parasitic roundworms used as a model whole organism. In this case, the technology quickly developed a cocktail of four drugs that was effective in paralyzing the roundworms. The discovery is reported in the journal Science Advances.

“A smarter alternative to drug discovery would be coming up with optimized combinations of existing drugs that are more effective and already approved by the Food and Drug Administration. An exciting challenge would be to test if this technique works on other model organisms and parasites.”