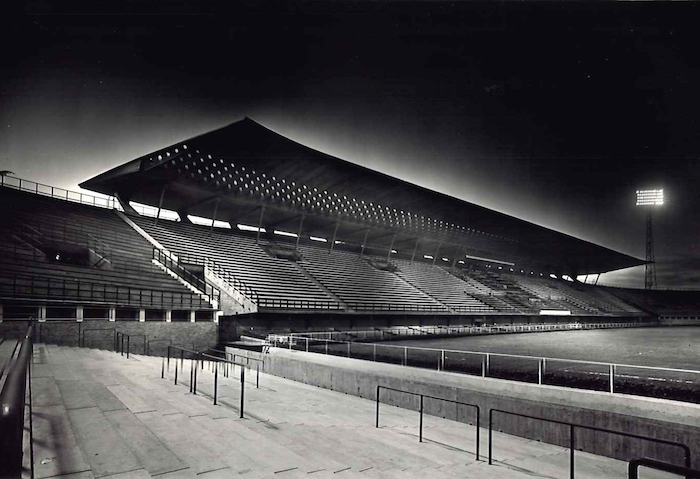 AMES, Iowa -- An Iowa State University architecture professor is on an international team of scholars awarded a Getty Foundation grant to pave the way for conserving a threatened, mid-century architectural masterpiece.

The Flaminio Stadium was designed and constructed by Pier Luigi Nervi and his son Antonio for the 1960 Olympic Games in Rome. The football stadium could seat up to 50,000 spectators, and featured four gyms, a pool, a bar, change rooms and a first-aid station. Abandoned for years, the football stadium is now in an advanced state of decay.

Thomas Leslie, Iowa State Morrill Professor and Pickard Chilton Professor in Architecture, is part of the yearlong project led by Sapienza University of Rome, Pier Luigi Nervi Project Association and the conservation agency DOCOMOMO Italia. Their interdisciplinary conservation plan to preserve the stadium will be developed under the supervision of an international scientific committee.

As a 2013 Rome Prize Fellow, Leslie documented and analyzed buildings by Nervi, a postwar Italian engineer, architect and recognized pioneer of the study and use of reinforced concrete. His book based on that research, "Beauty's Rigor: Patterns of Production in the Work of Pier Luigi Nervi," will be published Oct. 30 by the University of Illinois Press. (See sidebar.)

For the Flaminio Stadium conservation project, Leslie will detail why the Flaminio is a culturally and historically relevant structure worth conserving. He'll look at the history of Nervi's design and construction process, and the building's social and cultural context.

The conservation team's overall plan will include design and construction guidelines for a restoration that will respect Nervi's ingenuity and technique, while bringing the stadium up to current building codes. It will focus on promoting, supporting and guiding a successive project for the stadium's rehabilitation.External view of grandstands, 1960. Courtesy PLN Project, Brussels. 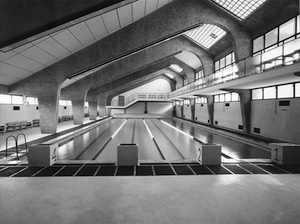 Many architecture historians consider the Flaminio Stadium a distinctive work that offers a highly original union between form and structure and between architecture and engineering.

The stadium is one of the buildings Nervi not only designed, but also built, using a small contracting firm that prefabricated and built the entire structure.

"He was able to break these big-scale projects down into problems that very small crews could put together,' Leslie said.

"Nervi's incredibly graceful, super-rich visual or architectural experiences are actually simple buildings. He built them with a couple dozen people and, in some cases, with hoists and pulleys," he said.

Leslie says the stadium is a "very expressive work of concrete" and one of the first stadiums to use a geometric solution in its design.

"The side of the stadium undulates to hold more spectators in the best seats between the end zones. So its curvilinear geometry expresses the function — an important modernist tenet.

"It's also made of concrete, and because Nervi is very fluent in how to form and shape concrete, the stadium also expresses the material itself," he said.

Leslie says the Flaminio Stadium can be considered a modernist architecture masterpiece because both the function and the material are expressed frankly and beautifully, and the building is put together with honesty. His work was "beautifully patterned and evocatively shaped." 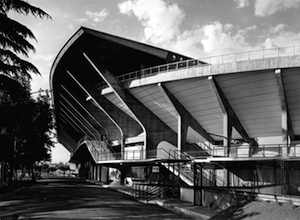 It is important to preserve 20th century buildings like Nervi's for two notable reasons, Leslie said.

First, the Flaminio Stadium and other post-World War II buildings in Rome represent a layer of 20th century history that may not be as exciting as the surrounding, ancient architectural landmarks. However, the stadium's cultural and historical distinction derives from the prestige of the 1960 Olympics Games in Italian history.

"Italy was an Axis power in the war and in hosting the Olympics 15 years later, they built a more progressive world in the Olympic Village structures. The architecture defines that significant moment in their culture and history," Leslie said.

Secondly, architects' designs originate in historic traditions — buildings look like one style or another. In the 20th century, architects "broke out and created new and relevant experiences with their buildings." Nervi and other architects expressed forms and visuals in the language of physics and construction, rather than imitating traditional styles such as classicism.

"Some buildings of the era worked well and are quite elegant, while others clearly didn’t work as well. Some were a bit too structurally honest and didn't have the same kind of panache that Nervi's did," Leslie said.

"Buildings like Nervi's are important to preserve as a way of understanding the origins of contemporary architecture's visual language, which relies equally on science and art for inspiration," he said.

Leslie describes "Nervi-esque" buildings as 1960s or 1970s structures that have long-span concrete or an expressively detailed concrete.

"Hilton Coliseum and Stephens Auditorium are both very much part of that expressive concrete tradition. They have a little of his inspiration and spirit."

The Getty Foundation fulfills the philanthropic mission of the Getty Trust by supporting individuals and institutions committed to advancing the greater understanding and preservation of the visual arts throughout the world.

"Buildings like Nervi's are important to preserve as a way of understanding the origins of contemporary architecture's visual language, which relies equally on science and art for inspiration. 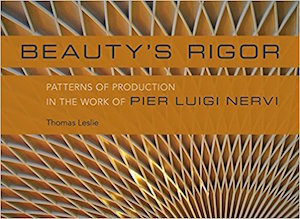 In his upcoming book, Leslie takes a fresh look at the Italian architect's work. Architectural historians most often discuss Nervi's work in terms of structural form because his buildings relate to how loads and forces flow through a structure and his geometries are carefully calculated, Leslie said.

"But I'm especially interested in Nervi's very abstract forms and how he builds them using simple methods and relatively straightforward equipment. His small crew were often fairly unskilled laborers and were almost like a family," he said.

"Nervi had four or five techniques of building in concrete that allowed him to construct extremely big structures by breaking them into hundreds of little components. You find that you could almost go make a Nervi building in your backyard," Leslie said.

Because he cleverly used simple construction processes, his structures were economical. But, Leslie says, breaking the buildings down into small, human-scaled construction problems had an almost unintended consequence.

"When you walk into that large stadium, for example, instead of just seeing a 300-foot-span roof, you see the pattern of the building in terms of the 10-foot modules that two or three workers framed and placed," Leslie said. "So his building have a fine, human scale to them that most of his contemporaries' projects did not."

"Beauty's Rigor: Patterns of Production in the Work of Pier Luigi Nervi" will be available from Amazon and the University of Illinois Press on Oct. 30.