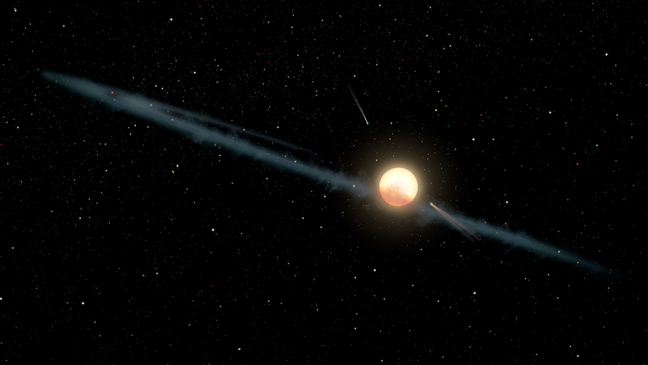 Marengo, an Iowa State University associate professor of physics and astronomy, admits there are other projects on his research agenda, including infrared observations of older, giant stars and young planetary systems.

But this particular middle-aged star – KIC 8462852, also known as Tabby’s Star or Boyajian’s Star, after Tabetha Boyajian, a Louisiana State University astronomer and lead author of a 2016 paper introducing the star – is an interesting case.

First, it was found by citizen scientists using the Planet Hunters website to study measurements of star brightness taken by NASA’s Kepler spacecraft. Tiny dips in a star’s brightness can indicate a planet is passing in front of the star. But this star was dimming by up to 20 percent. It was also dimming irregularly, sometimes for days and months at a time. And smaller, longer-term dimming continues today.

“This is a very pathological case,” Marengo said. “If we can understand this, we can understand other cases. This star can potentially tell us a lot about the kind of processes that happen in the planetary systems of regular stars. But this is very rare – it’s the only star we’ve found that shows these phenomena.”

The unusual dimming led to a lot of potential explanations, including speculation that alien megastructures built to harvest the star’s energy were passing in front of the star and creating the dips in brightness.

A scientific paper recently published by The Astrophysical Journal points to space dust circling the star as the source of the long-term dimming. The paper’s findings are based on space observations from NASA’s Spitzer and Swift missions, plus ground observations from amateur astronomers at Belgium’s AstroLAB IRIS public observatory. All the observations were from October 2015 through December 2016, and from ultraviolet to mid-infrared wavelengths, including visible light.

Marengo’s role for this study was to analyze how the star’s brightness changed across the electromagnetic spectrum. To do that, he combined NASA observations with the data from Belgium. Trueba developed software to help with the analysis.

It turns out there was less dimming of the star’s infrared light than its ultraviolet and visible light.

That makes an alien megastructure as the cause of the mysterious dimming “more and more unlikely,” Marengo said, because opaque solar panels would absorb all light equally.

Much more likely is circumstellar dust – small particles orbiting the star – blocked some of the shorter ultraviolet light but allowed larger wavelengths of infrared light to jump though, he said.

The “selective absorption” tells researchers that the dimming is caused by small particles a few microns across, just a few millionths of a meter, that are circling the star as dust clouds or perhaps a dust ring. Marengo said the data seems to indicate the dust particles are too large to be the kind usually found in interstellar dust clouds between the star and Earth.

A 2015 study by Marengo and two former Iowa State graduate students, published by The Astrophysical Journal Letters, looked at deep, short-terms dips in the star’s brightness. That study concluded the sharp dips were most likely caused by a large debris cloud left by the destruction of a family of comets. (The new study extends the earlier research, but focusses on the long-term dimming that has also been observed.)

Even with all the recent attention, Marengo said there’s still more to learn from this star.

Astronomers, for example, have only recently started to study dust disks close to stars, similar to the one that best explains the long-term dimming of Tabby’s Star, Marengo said. These “warm discs” had been too difficult to detect so close to a star. Now, the unique situation at Tabby’s Star may help astronomers better understand these disks.

“Clearly, something dramatic happened here,” Marengo said. “One of my major fields of study is planetary systems and these are strange phenomena that are out of scale with other systems we’ve seen. Something created these clouds of debris – we still don’t know the original cause.” 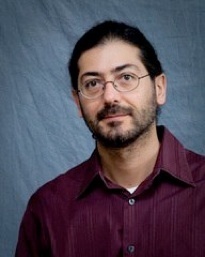 Iowa State's Massimo Marengo is part of a team of astronomers working to understand the mysterious dimming of Tabby's Star. The star was found by citizen scientists who noticed unprecedented dips in the star's brightness. The unusual dimming led to a lot of potential explanations, including speculation that alien megastructures built to harvest the star’s energy were passing in front of the star. The astronomers report that space dust orbiting the star is the likely cause of the star's long-term dimming.

“This is a very pathological case. If we can understand this, we can understand other cases. This star can potentially tell us a lot about the kind of processes that happen in the planetary systems of regular stars. But this is very rare – it’s the only star we’ve found that shows these phenomena.”