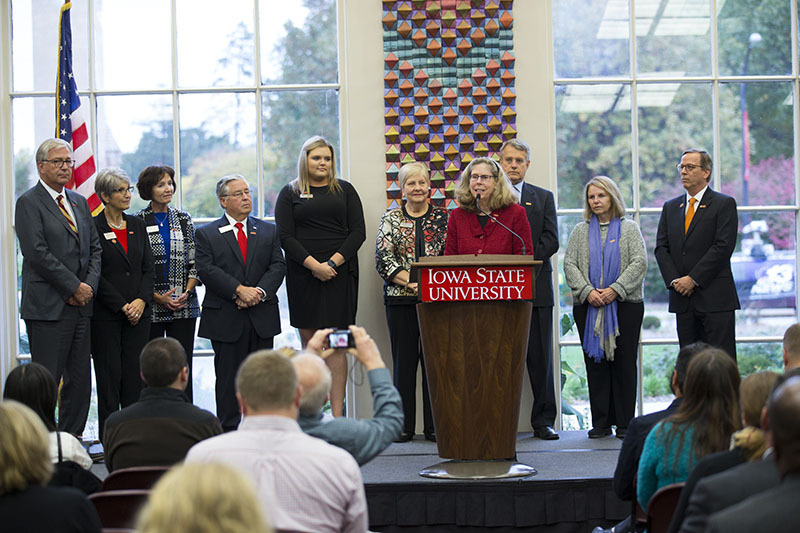 Wendy Wintersteen, endowed dean of the Iowa State College of Agriculture and Life Sciences, was introduced as the university's 16th president. Members of the state Board of Regents announced the selection on Oct. 23. Photo by Christopher Gannon.

AMES, Iowa – The Board of Regents, State of Iowa, today named Wendy Wintersteen the 16th president of Iowa State University.

Wintersteen’s appointment concludes a nearly six-month national search. She will take office on Nov. 20, 2017. Wintersteen, endowed dean of Iowa State’s College of Agriculture and Life Sciences and director of the Iowa Agriculture and Home Economics Experiment Station, will succeed Benjamin Allen, who has served as interim president since May 8. Steven Leath, Iowa State’s 15th president, assumed the presidency at Auburn University last spring.

Wintersteen, 61, has led the College of Agriculture and Life Sciences since 2006. During her 11 years as dean, she helped raise more than $247 million in donor support for students, faculty and staff. Undergraduate enrollment in the college has grown by 90 percent, and the college’s placement rate for recent graduates has consistently been 97 percent or higher.

Wintersteen has been with Iowa State since 1979, leaving only briefly (1989 to 1990) to serve as acting National Pesticide Education Program leader for the U.S. Department of Agriculture’s Extension Service, Washington, D.C.

Prior to becoming dean, Wintersteen served as the college’s senior associate dean and associate director of the Experiment Station. In her career at Iowa State, she also has served as professor of entomology, director of Extension to Agriculture and Natural Resources, and coordinator of pesticide management and pesticide applicator training programs. She serves on the board of trustees of the Farm Foundation and the board of directors of the U.S.-Israel Binational Agricultural Research and Development Fund. She is president of the board of directors for the Charles Valentine Riley Memorial Foundation.

Wintersteen received the Carl F. Hertz Distinguished Service to Agriculture Award from the American Society of Farm Managers and Rural Appraisers in 2016. She was honored as a Kansas State University Alumni Fellow for professional accomplishments and distinguished service in 2007. She also is a member of the Entomological Society of America and the American Association of University Women.

Wintersteen earned a bachelor of science in crop protection (1978) from Kansas State University and her doctorate in entomology (1988) from Iowa State.

The 21-member presidential search committee was co-chaired by College of Design Dean Luis Rico-Gutierrez and Dan Houston, chairman, president and CEO of Principal Financial Group. Washington, D.C.-based AGB Search guided the recruitment process at the direction of the Board of Regents. 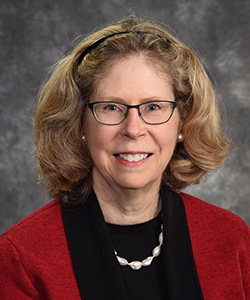