A paper published recently in the peer-reviewed academic journal Plant Physiology shows a gene found in a model plant called Arabidopsis could confer improved disease resistance in soybeans. Madan Bhattacharyya, a professor of agronomy and lead author of the study, said his current research points toward several Arabidopsis genes that could act in concert to help soybeans fight off sudden death syndrome, a disease that has caused millions of dollars in crop losses for Iowa farmers.

“We’ve started to map many of these genes, and we think there are many different mechanisms that work together to create resistance of Arabidopsis against two soybean pathogens,” Bhattacharyya said. “We’re testing a hypothesis that putting a combination of these Arabidopsis genes into soybeans confers a high level of disease resistance.”

Bhattacharyya said all complex organisms, whether plants or animals, demonstrate resistance to most of the potential pathogens they encounter in their environment. Arabidopsis, a small flowering plant that serves as a good model plant due to the ease with which it can be studied in experimental settings, shows resistance to two soybean pathogens that cause sudden death syndrome and root rot, respectively. So Bhattacharyya and his colleagues have spent years combing the genome of Arabidopsis to identify genes that might contribute to that resistance.  He then uses cutting-edge transgenic techniques to insert likely genes into soybean plants at the ISU Plant Transformation Facility, which are then grown and studied for their disease response.

The study identifies one of those genes, called PSS1, as a means of improving soybean resistance. The transgenic soybean plants carrying this gene showed enhanced SDS resistance in two consecutive years under field conditions, Bhattacharyya said. The SDS resistance encoded by this gene will complement the natural SDS resistance, which is encoded by 40 or so genes each conditioning small amounts of resistance. He expects incorporation of additional PSS genes together with natural SDS-resistance genes will provide soybeans robust and durable resistance. Finding the optimal combination of those genes is the current research goal of his lab, he said.

“We’re hoping in the next few years to test how combinations of PSS genes affect SDS resistance,” Bhattacharyya said. “We think we may find that multiple genes working together will build the resistance levels.”

The Iowa Soybean Association and Consortium of Plant Biotechnology Research funded much of the early research dating as far back as 2004, Bhattacharyya said. Currently, the research is funded primarily by a multi-million dollar grant through the Agriculture and Food Research Initiative from the U.S. Department of Agriculture’s National Institutes of Food and Agriculture as well as the United Soybean Board and the ISU agronomy department. 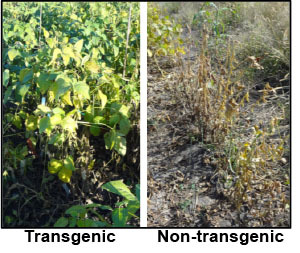 A transgenic soybean line (left) carrying PSS1 confers SDS resistance while the line on the right without the PSS1 gene is SDS susceptible. Image courtesy of Madan Bhattacharyya.

Incorporating a combination of genes from the model plant Arabidopsis may build high levels of resistance to sudden death syndrome in soybeans, according to research from an Iowa State University agronomist. A recently published study points to one gene in particular as a likely candidate to bolster resistance.

“We’re hoping in the next few years to test how combinations of PSS genes affect SDS resistance. We think we may find that multiple genes working together will build the resistance levels.”